Hello WOYWWers, Followers and All,

Another Wednesday and time to reveal the mess that is my workdesk this week. Piles, more piles and yet more piles - not a pretty sight. Believe me, I tried taking the photo from various angles but none were an improvement. As you can see I've been scrapbooking. To the left you can just see the completed 12" x 12" posted here. On the right are two 8" x 8" layouts, also completed, and they should now be in the album that's lying underneath at the bottom of that pile. And slap bang in the middle is the start of the next layout. The pack of markers are the ones I use for writing up the journaling.

That's a box of paper strips at the back.  I've been riffling through them looking for just the right ones for the layout.  Goodness knows why I keep them - I should just bin them and admit it's a hoarding of snippets too far :) Behind that there's a couple of piles of photographs - I've been riffling through them too. The rest is just the usual detritus that seems to accumulate from week-to-week. I think I will have to have a blitz later ... just looking at this photo is making me twitchy.

To join in the fun of snooping round lots of workdesks, messy or otherwise, around the world, just pop over to Julia's place, the Stamping Ground, where you can find links to all those crafters who chose to reveal all, whether it's a desk, a dining table, a kitchen worktop or even the floor. Go on, you'll enjoy it  :))

As I'm sure to be asked about it, here's a close up of the layout lying on the top of the pile to the left. 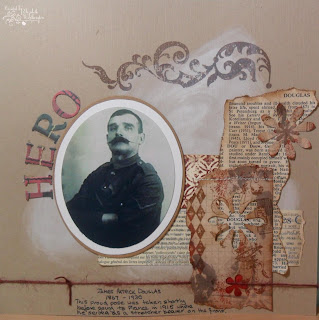 This wonderfully proud gentleman is my great-grandfather, James Patrick Douglas. This photograph was taken in 1915, just before he was sent out to France. He was a 43 year old nursery gardener at the time - rather old to be in the forces but they were desperate times and James had previous experience, having fought in the second Anglo-Boer War, 1899-1902, when he was in late twenties. I can only assume that was why he and my great-grandmother didn't marry until 1904 when he was 32 and she was 29 ... quite old by the standards of the day. I do know that they were very much in love and had a son and a daughter, my grandmother, by 1915. He served with the  Field Ambulance Corps, as a stretcher bearer, and somehow survived the war. However, he had lung damage from gas attacks and suffering from shell shock - what we would now diagnose as PTSD - and definitely a hero.

The layout is made using leftovers and scraps and was inspired by Sarah Engels-Greer creations featured in the October 12 issue of Craft Stamper. The Kraft base was sponged with white gesso before adding the stamping with Dawn Bibby’s Delicate Scroll and bits and bobs from my snippets pile. I searched a biographical dictionary to find a page that featured the name Douglas. The title was die-cut using X-Cut’s Rome Alphabet Die and a strip of tartan patterned paper – sadly, not the Douglas tartan.

Ah, there's the magic word snippets again which means this layout qualifies for Di's Snippet Challenge #37 I think, even though it is not a card.

It's the early hours of Wednesday morning here in Scotland, so I'm off to bed now but I'll be back later to join in the deskhop.

In the meantime, I wish you all a very happy WOYWW and happy crafting,

I stopped by a couple of times last week and couldn't leave a message. Every time I tried, my computer froze. I didn't want to give you a virus, so I stopped after twice. I DID stop by, though.

I like how you found a use for what you call "detritus," or scraps. I know how they pile up, but your scrapbook page is absolutely gorgeous. I love it. Happy WOYWW from #2.

Oh what a wonderful layout this is...He is such a handsome gentleman!

My grandfather fought in the Boer War and the Great War. I have often thought I should get his photos into layouts...You have inspired me again, Elizabeth!

Haven't used my papers yet as I have been cleaning and reorgianizing...you will see why on my post. Not much crafting time for me till i am done my "redo".

I don't see many scrapbooker's on WOYWW. It was nice to see your page. I love the heritage look to it. dani #18

That is a lovely LO and I love hearing a little of your family history. So important to document it for the future generation. Have a lovely week.
Sandra @23

What a great page for your great grandfather. That's wonderful that you know the history of your family too.

Meeting Di and Len for a farewell dinner - on Wednesday here in the states.

Morning! Can't sleep, won't sleep but going to regret it and wish I was in bed like you are (I hope).
Thanks for sharing all those wonderful peeks at those wonderful LO's you have been doing. My oh my, you have been busy.
Love the one you show us in detail, vintage is one of my favourite things and this is so beautifully done. Thanks also for the story behind your GG James Patrick which was very interesting, what a lovely man he must have been.
Hugs Neet 17 xx

What great layouts and pics. I keep intending to do a Family Tree in pictures for my boys. You are a great insparation!
Krisha #50

What a fantastic layout.

I love old photographs .. .. and your artwork alongside is brilliant. Love the finished look!!!

To reveal my workspace this week would be photograph overload.

Wonderful layout, and story of your great grandfather. Helen, 20

What a wonderful heritage page Elizabeth, even though it is on the right, not the left :o)
Jackie xx

You look very busy there, Elizabeth. I'm very envious that you doing so much scrapbooking, that's what I want to do now all DT work is finally done.
The finished LOs are beautiful. I've been for a good look. How brilliant that you are recording your family history. These amazing stories need to be told for future generations.
Happy WOYWW
Hugs Lisax #88

Great space and such a fab scrap. Thank you for sharing your space.
Cathy #52

Definitely a hero. Great page. I bet Sarah will be thrilled to see her influence on the WOYWW circuit!
I love the idea of a box of snippets too far...bet you don't ditch them!

Hi Elizabeth, Great workspace and layout and the old photographs l like any thing vintage and how effective the flower taken out and placed on the paper so beautifully done xx

Oh WOW ,what a great LO, I absolutely love it and the story behind him.Thanks for sharing it.I so need a catch up after being MIA.xx#86

Hi Elizabeth What a lovely post. I enjoyed reading about your Great Grandfather. How fab to know so much about him. He was a hero indeed. Happy WOYWW to you from Helen 5

Super desk pic, love your layouts and the history behind your GGfather. I'm in to family history and spend many hours reading censuses and tracking down information. I've many photos too, must scan them in and do something with them! Take care Zo xx 109

Wonderful page Elizabeth, love the gesso in the background and the bits and bobs so PLEASE DO NOT throw out you strip box as I'm sure the pieces will be used up. BJ #102 and rather behind today with DS off school again.........

Lovely LO Elizabeth. We just can't imagine what those poor folks suffered during WW1 - I have just read several books by Anne Perry about it. It's a subject that has always fascinated me. Thanks for sharing. x Jo

Awesome layout! It's great to preserve family stories like that.

Fabulous layout Elizabeth - such a good-looking chap too.

I hope you gave the snippets mischief makers a little warning look for me in the playground :)

Elizabeth, thank you for your visit and comment on my blog. Monkey bread is little balls of dough rolled in cinnamon sugar then stacked in a bundt or loaf pan and baked. It is then flipped out on to a serving dish and topped with powdered sugar icing or my daughter prefers it with my homemade cream cheese icing. You eat it by pulling apart the balls. dani #16

What a lovely love story. You are very lucky to have photo's of him.
I love using my scraps on cards and have made a real dent in them since I started making cards.
Happy WOYWW!
Tertia #48

Looks like you have all kinds of crafty goodness going on today! :) Love that layout - that picture is just priceless! Happy WOYWW! Tammy #121

Stories like that fill me with awe - what sights the gentleman must have witnessed - true bravery like that is to be recognised and honoured. Your LO does that perfectly....
LLJ #73 xx

I just love the layout of your Grandfather! And your desk looks like you are a very busy girl!

That layout is beautiful and as for being able to have a photo like that is fantastic. :) Just what SBing is all about.

Just noticed your from Ayr, I was down there on Sunday, taking my DD to UWS, then we had lunch in Wetherspoons - yum :)

I love your layout and the photo is wonderful. I enjoyed hearing the history as well. Happy WOYWW Anne x #149

what a great layout and a fab story, I especially like your use of scrap pages, or should I say snippets. do you know you can get something for piles......... a box LOL
thanks for sharing
janet #39

Oh this is beautiful Elizabeth, a wonderful photo of your great-grandfather and I loved reading a little about him too :)
Kelly.x

Fun layout, Elizabeth, how great is that photo?? Wow!

This is a great layout for your great-grandfather and gives some space for your history notes. It's interesting to contemplate how much wars disrupt the pace of things in more subtle ways as well as the obvious disasters. My parents didn't marry until after WW2 at the ages of 32 and 26. In fact, they met before the war and Dad knew he would marry the girl in the white dress but never told her in case he didn't come back.

Thanks for sharing both the history snippet and the art work.
Ros. #157

That is one really special layout and how lovely that you have all this information, this is a life time treasure. Oh your desk looks like the pikies have been playing it's not your fault really it isn't.

I get to visit your desk for both WOYWW and Pixie's! You do have a mess there, but you've got a wonderful layout to show for it! I enjoyed reading the story behind it and a bit of your family history. TFS! Darnell #74

Can't wait to see the outcome of the one with the books in the background!

Lookin good :) Love having a peek into the spaces of fellow crafter's! If you happen to peek in on my blog, be sure to wear a hard hat! LOL!