What's On Your Workdesk Wednesday - Week 489

I hope you are having a lovely day. Here the sun is shining and the day looks promising but that isn't stopping me from participating, bearing all, in Julia's What's On Your Desk. Actually, for reasons mentioned in previous posts so I won't bore you with repetition, not much has changed in the last couple of weeks so here it is in all it's messy glory. 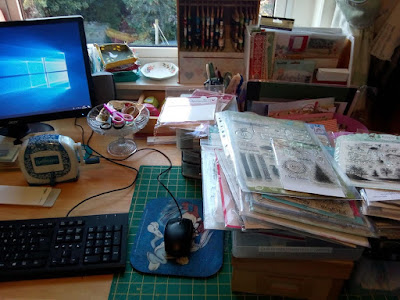 Mainly it's covered in piles of festive stamps and packs of patterned paper. I'd like to say I've made a ton of cards but, truth time, I haven't. I've just been plugging away whenever I found the odd moment. Without the EM to take up the slack, domestic duties have had to take precedence. Not that I'm complaining - it is what it is! 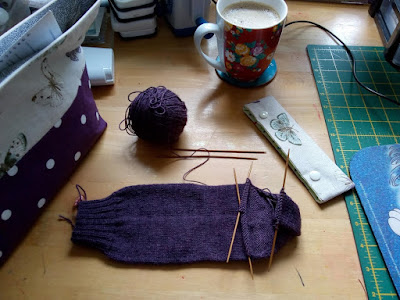 However! I have managed a bit more knitting - something to do in the evening, on the sofa, in front of the TV. My very first sock, ever, is coming along very nicely indeed and I've just started to turn the heel. I have high hopes of finishing the pair before 2019. 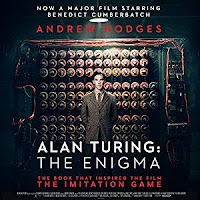 Just the one today - Alan Turing: The Enigma by Andrew Hodges. This biography of the founder of computer science is a huge listen - almost 31 hours - so I assume that it's a long read too. A heavy one too - the maths is incredibly detailed! However, I have to say it is a fascinating account of an extraordinary mind and life. Given my background in military communications and computer operation it's just my cup of tea, but it may not be for everyone. Turing developed his revolutionary concept, as early as 1936, of a universal machine and this led eventually to the foundation for the modern computer - the very technology we bloggers rely on today. And his role in breaking the German Enigma ciphers at Bletchley Park during World War II is also fascinating. I'm still listening, I did say it's a long book, so haven't yet reached the part where he is  persecuted by the establishment for his homosexuality and, as a result, his sad ending ...

As I mentioned earlier, I've been working on cards recently and scrapbooking has been neglected but that's about to change. I have, a tad impulsively, signed up for the Mind The Scrap cyber crop taking place this weekend - yes, the whole weekend! It promises to be intense but fun. I'm looking forward it.

If you haven't participated in What's On Your Workdesk Wednesday before but fancy joining in the fun do pop over to the Stamping Ground where you can find all the information you need here. It's really too easy, post a photo of your desk, tidy or messy it doesn't matter, and add your link to all the others. It's fun, you'll see.

In the meantime, have a very happy WOYWW and a great week ahead.

I guess you'll be able to drop in and out of the Cyber Crop (this brings to mind robots doing scrapbooking....sorry!!) so it'll be great fun! I'm in awe that you're knitting socks - the thought of working with four needles does my head in but patience is most definitely not a virtue of mine....
Hugs LLJ 8 xxxx

Hi Elizabeth, that book does sound interesting, we keep meaning to get round to watching the film with Benedict Cumberbatch in. Good work on the sock, I understand they are not the easiest things to knit. Have a lovely week, Hugs, Shaz #6 X

Oh I never read the book but I saw the movie and it made me cry in the end. It was really fantastic but I imagine the book is wonderful.
Love your first sock. I haven't knitted anything in a couple years and really afraid I forgot. But I would love to make something really simple this winter to get me back into it. I never made a sock, I was always intimidated. I like the color you chose for yours. Have a blessed day!
Belinda #25

Well done you with the sock progress....who will they fit when they’re finished? I’m sure if I knitted a pair I’d struggle to find a foot to fit them and they’d end up different sizes 😂😂😂😂 Hope the patient is behaving and making a good steady recovery now.
Big hugs,
Annie x #11

The sock is looking great, and what a stash of stamps to play with! Turing is a fascinating figure - one of Britain's real heroes, I reckon!
Happy WOYWW :)
Claire, no. 1

I've been at work and it's been raining..... but am now catching up on desks, so all is good! Not sure my brain would cope with the book, however fascinating the subject undoubtedly is; so good luck! Helen #4

Hi Elizabeth. I actually get a bit fed up at this time of the year as all the Christmas stuff seems to take up so much space that I don't have and my other projects are inclined to go missing which can get very annoying. Like you there are other things too which have to be done. But I hope you have a great woyww and a happy crafty week, Angela x16x

I feel like my scrapbooking has been pushed back as well. Every so often I need to set aside some time to scrapbook all my photos! Have a great week. Dorlene #28

That cyber scrap crop sounds fun Elizabeth. Look forward to seeing what you get up to. Good luck with the socks! Sarah #3

Seeing your sock has made me feel quilty, I am kitting a pair for Tom, one is finished and the other is waiting in line and has been for months. I must get them out and finish them.
Your desk looks a bit like mine does when I'm working. lol
Briony
x

Those sock will keep the tootsies so warm, love the colour. Always a wow from me when I see knitted items as i'm quite rubbish with wool & needles.
Have fun with your cyber crop, it will be a great way to escape when you get a moment.
Happy WOYWW & enjoy reading the rest of your book.
Tracey #5

Does this mean you have not yet started your "C" cards? If so I am glad because I haven't either and am on bed rest at the moment due to swelling in my legs. Pleased to say they are coming down so hopefully I can get up tomorrow. Not promising any "C" cards though.
Glad Em is doing well, my Pacemaker battery is running down so will be in shortly for a changeover. Mind you it has been in 7 years so he has a bit before he has to have enforced rest again.
Good luck with the socks, especially when you come to the heel. Not made any since I was 11 and that is a long long time ago.
Hugs, Neet 14 xx

Hi Elizabeth a fascinating post, love the sick, brilliant and turning heel on first one I reckon that it the pair will be done by Christmas!! Welldone on the read too, my darling dad being a mathematician would’ve loved that. Was unaware if your background but certainly would be fun for you too.
So y
Utterly lovely to meet you and EM at the crop. Happy belated WOYWW. Shaz on Oz.x #20 enjoy the big weekend blog hop too.

Good morning, Elizabeth. The book sounds fascinating. Had I been able to enter the military, I wanted to go into communications. I'm checking out Mind the Scrap. Sounds fascinating. Creative Blessings! Kelly #26

Hi Elizabeth. Goodness - that really will be a mammoth read, but I'm sure you will find it utterly fascinating. Enjoy the knitting.
Love to the pair of you at this time.
Take care. God bless.
Margaret #2

The movie was wonderful, I probably wouldn't be able to get through the maths in the book, but it might be a good Christmas present for my Mom! Good luck with the knitting, I'm sure the second sock sock will go much quicker! Nice pile of stamps waiting for you on your desk! Have a great week, Lindart #29