Hope you've had a good week. It's been an eventful one for us. Wednesday morning brought an unexpected call from the hospital asking if the EM could make it in that afternoon. He was being admitted to have his pacemaker fitted the following day, Thursday. He's been on the waiting list for some time now so he was there on time as requested. All went fine and he came home Friday morning. Although he is a bit bruised and sore and he has to behave himself for a few weeks I can see a difference already ... three days and he's zipping around like Speedy Gonzales - soon there will be no stopping him now!

Given the above, I've not been crafting but, in true Blue Peter fashion, I do have this card I made earlier. 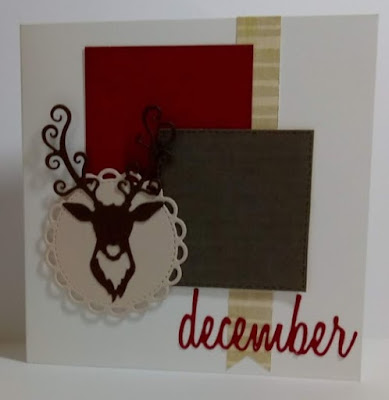 Apart from the 5" square white card base everything else used was from these leftovers from making scrap pages. 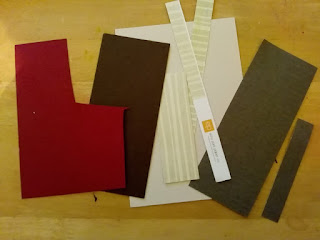 One of the pieces of striped patterned paper was trimmed to create the banner and the two squares were cut from the red and brown papers. 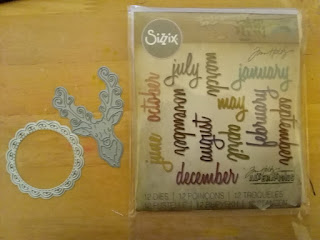 The scalloped circle, the antler's head and the month were cut out using these dies. The circle is from a set from The Works and the stag's head is a Tattered Lace die.

The design was inspired by this sketch from Julee Tilman on Mojo Monday Card Sketch Challenge. Sadly, Julee is no longer running the challenge but the blog is still accessible ... it's so worth checking out for the many sketches and inspiration there.

I'm submitting the card to Di's challenge over at Pixie's Snippet Playground where we can now follow the adventures of the playground's newest playmate, Dudley. Seems he is giving Parsnip a run for his money!

Have a wonderful week everyone,

Wow Elizabeth! First of all - wonderful news about Alan's pacemaker. A chap at Len's archery club just had one fitted and, as you say, the difference is amazing!

Love your card - it reminds me very much of the Highlands. Also, it's great to see the snippets 'pre-card'!

And yes, it was a long search for Dudley - I know this from when I was checking back through my 'Havanese' email folder, it surprised me a bit I should add. But, unless we were prepared to travel to far flung places in the UK and beyond (more than once of course) it was a case of just waiting and hoping. From the same litter, Dudley's siblings have travelled quite some distances to their new homes. One little boy (called Geoff by the new owners!)was collected and flown with his owners by private plane back to their home on Guernsey! Dudley had to make do with a half hour car ride back here, snuggled up in his puppy blanket! And every single week we had to keep on looking was worth it - ten times over :)