I hope you've had a wonderful Sunday, and weekend!

I've been out and about today - more of that later - but still managed to find time to make this card. 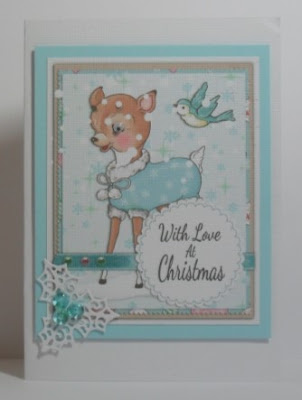 This card began life as a digital one - using Serif Craft Artist 2 and a Christmas Digikit, Betty & Bertie (Heart Designs) - but disaster struck when I tried to print it out on cardstock ... my inkjet printer hated the thickness of the card even though it has gone through okay before. I tried several times but the result was always the same - ink where I didn't want it. I was about to toss them all in the bin but then I thought perhaps if I trimmed them down I would have, at the very least, some half decent toppers. After trimming them, they were matted on to aqua coloured cardstock and then adhered on to a white card base - made from the cardstock the printer hates ... if it won't go through the printer I might as well make good use of it!

I made another mistake when I was designing the card front. I laid a snowflake overlay, digitally of course, over the image only to discover when I'd printed it out that one of the snowflakes had landed just over the little deer's eye ... it looked very strange. I've disguised this by gluing googly eyes where the eye should be.

It's not showing up on the photographs but I added Sprinkled Sugar Stickles to the 'furry' areas of the image. It does look sparkly in real life.

The holly leaves were cut with a Tattered Lace mini die from snippets of white cardstock. I picked out aqua and pink dew drops for the 'berries' ... unlikely colours but pretty embellishments. 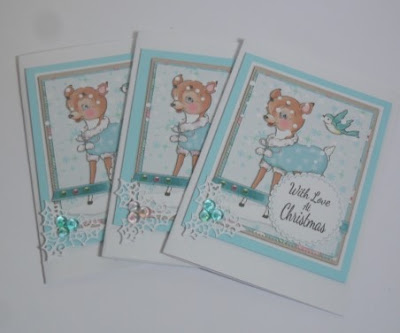 Here's a photo of all three cards.

I'd like to submit the card to the following challenges:

A Snowflakes Promise #33 - anything goes

Before I close, I did promise to tell more of what happened when we were out and about. We went into Ayr town centre because my husband wanted to buy a book. We have shelves and shelves of books in this house but none appealed to him.

The town centre was buzzing because it was being prepared for the Christmas lights switch on at 5pm, by which time it would be dark. Doing the honours was Ayrshire Paralympian Robyn Love. Also appearing on stage were the singers, Gareth Gates and Michelle Heaton. Traffic had been stopped from driving down the main shopping street so children's amusements had been set up too.

We popped in to Waterstones Book Shop for a coffee and a browse around, for that book, only to discover that it was a Magical day providing Wizarding World themed activities and to be greeted by none other than the Wizard Balthazar, Expert Swisher of Wands and Wrangler of Wild Nifflers. 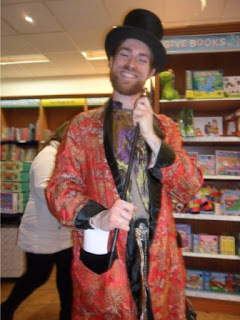 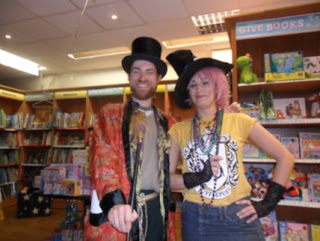 The lady with him is either Lady Slytherin or Nymphadora Tonks - I'm not sure which! It was all great fun.

At this time of year you just never know what entertainment you might find on a trip to the shops.

Take care and have a good week,

Hi Elizabeth, a gorgeous set of cards love how you managed to rescue them, they look brilliant. Love the colours you have used including the soft velvet ribbon and those bling! Have a fabulous week... Megan

OMGosh, what an adorable card!!!! I love it! Hugs, Brenda

Hullo again Elizabeth,
... well this is one little cute deer image reminds me of one I had on a card when I was eight sooo cute and bonus you've three of them!! Hope hubby found his book ;-)
Thanks for sharing,
Shaz in Oz.x

Awww your cards Elizabeth are just so cute what an adorable and loveable image lovely style too! x

That deer is absolutely precious!! I love soft blue color and your sparkly blue berries for the holly too!! ;) Thanks for sharing your creation with us at Cute Card Thursday! Hugs & Smiles - *Vicki*-DT member

So, so cute! I adore these cards Elizabeth! Soft and very pretty.

Your sweet little deer gave me the sweetest googly-eye from Pixie's gallery, Elizabeth! He is so adorable and I admire how you persevered to make it work!! How fun that you stumbled upon such entertainment while out! Hugs, Darnell

aww your Christmas cards are really adorable - I use Craft Artist 2 as well - it's great isn't it? Although this year I stamped all my cards and usually I would print the inners but didn't as my printer randomly decides to stop and say it doesn't like the compatible ink cartridge - so my fault I guess.
Re the problem you had with printing - just a thought as you said it had printed ok before on same card - do you (not sure of exact term) feed the card in so it is just grabbed by rollers before it prints? (hope that makes sense). I know if I just put card in and not do that, that sometimes in can be a bit hit and miss.
Gill x

Super set of cards Elizabeth and a great rescue. I have the same problem with my printer not wanting to take anything thicker than 180gsm card. Sounds like you had a fun time with all the entertainments laid on xx