In A Vase On Monday - October First

Monday again, not just any Monday but the first in October which, for me, means that it's officially the beginning of Autumn ... though I'm sure the Met Office would say different. I like Autumn - I may have said that before -I especially enjoy the flowers that linger like the ones I've picked for Cathy's In A Vase On Monday this week. 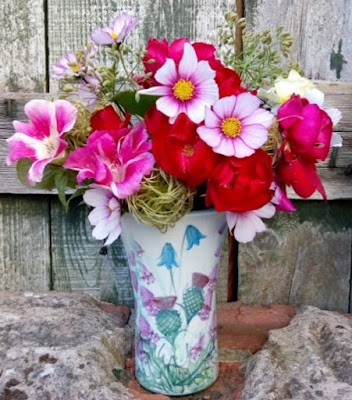 My roses continue to bloom even though the temperature has dropped like a stone throughout September. 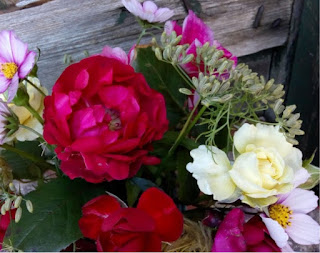 The 'Douglas' rose, with it's beautiful apple like perfume, is enjoying a second flush, as is the creamy 'Patricia Kent' - also nicely scented. 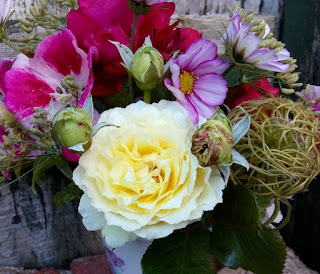 The buds of 'Patricia Kent' are usually a very pretty pale green colour but sometimes the weather does odd things to them as can be seen on one of the buds in this photo. 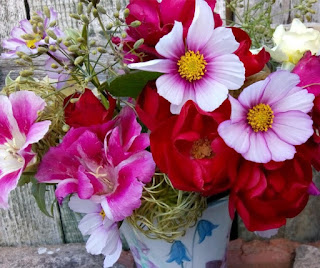 The other red rose in the vase is 'Eternity' which is completely different in appearance and scent from 'Douglas'. Both are growing in pots and doing very well there for now though I may have to find a more permanent place in the garden eventually. Last week I said cosmos 'Candy Stripe' was the only flowers I'd grown from seed but I lied. I'd completely forgotten the huge pot of godetia 'Little Frills' growing by the 'Man shed', though I can't think why because it's been one of the most colourful displays we've had since late August. Picking the best of them, they are starting to go over now, I noticed and included a few of the fabulous seed heads from Clematis 'Gillian Blades' and 'Nelly Moser' nearby - they grow up and over the shed in a glorious tangled mess. 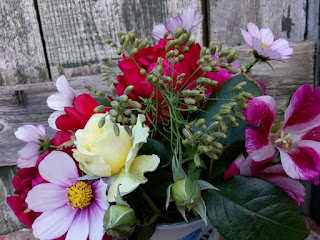 The final addition to this arrangement is a couple of sprays of fennel seeds. The foliage and seed heads are perfect for flower arranging but I really dislike the flavour of fennel and would never use any part of the plant in cooking! 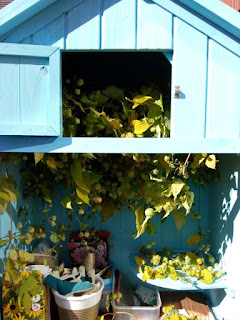 Talking of cooking, though this is more to do with brewing, I've been harvesting hop flowers, humulus lupulis aureus, to dry them on lines of twine I've strung up in my little blue hut. Normally our vine wouldn't produce this many ripe hops - we're too far north - but the heatwave has worked an amazing transformation this year. Once dry, they'll be passed to my son who is a keen home brewer.

Last week's vase stood up well to the heat of the sitting room but I've had to remove the roses and Cosmos - the petals started to drop. All that is left, looking fresh and pretty still, are the blues of the centaura montana and aster nova-anglaie.

I'm going to try Godetia next year, I've never had it before. Your vase is pretty and the contents too. Let's hope we get a few more weeks of warmth to keep the garden going. That's a great picture of the hops in your shed.

What glorious blooms Elizabeth, the colours are amazing and your arrangement is so beautiful, Kate x

Oh I especially like the vase that your blooms are in, Elizabeth and I am sure I have seen that design before - what pottery is it? Good to see your interesting collection of blooms - we don't often see godetia, something I have grown a couple of times but mine didn't flower for long. Perhaps the weather is helping this year! Love clematis seedheads and you have such interesting roses, so different from the very frilly David Austin ones, but still pretty and the fragrance sounds lovely. Thanks for sharing

I love the roses. Your entry into the beer brewing business is exciting too!