What's On Your Workdesk Wednesday - Week 459

Morning WOYWWers, Friends, Followers and All,

Many thanks for popping in, especially as recently I have been the world's worst blogger - it's a week since I posted! It's not that I've been doing nothing. I am, after all, retired, and as is often said by the retired, I'm so busy I don't know how I ever found time to go to work! Ah well, that's life! Now on to what I'm here for - to show you and Julia what's on my desk today. 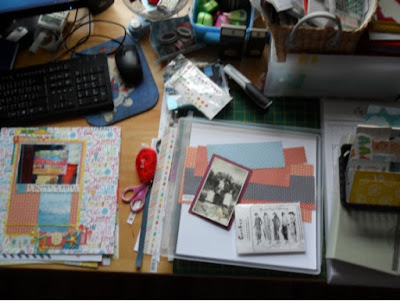 Despite it being officially spring, we have rain and so the light isn't much better than it was last week. Call me mad but as well as the usual self-imposed tasks - e.g. finish all UFOs, create scrap kits from the paper stash mountain, etc. - I've enrolled on Shimelle's Clear the Desk course. It's not entirely mad or unrelated to the task list as can be seen from that pile of layouts (on the left of the desk). Not only has it got me crafting again but it's chipping away at that paper mountain and now I have five lovely layouts to show for it. The pile of maker's strips are testimony to that too. The box with the scraps - all that's left from the kit used - old black and white photo and the stamp set is for the sixth, and last layout from this kit.  That little basket sitting on top the guillotines contains what is left of the die-cuts and cut-aparts I've been using. All that stuff at the back is necessary tools of the trade and, just so I won't forget,  the current UFO - the unfinished Christmas album.

Not much to report on the book listening front. I finished The Lewis Man only yesterday so it's on to The Girl Who Played With Fire by Stieg Larsson. 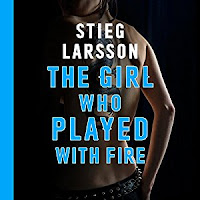 It's the sequel to The Girl With The Dragon Tattoo so I'm expecting it to be just as good a read. Unfortunately, I've already read the follow up and third in the sequence, The Girl Who Kicked The Hornet's Nest. Hopefully, I've forgotten enough of the plot to stop me enjoying this one too. 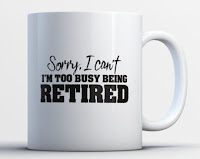 That's all from me today. I'm off to make a cuppa and a bit of lunch before settling down to check out what's on everyone's desks this week.

Have a lovely WOYWW and a wonderful week ahead.

Hi Elizabeth, I sometimes wonder what I'm going to do when I retire and have more time to do stuff. Well done on getting so many layouts completed. Hope we get to see the full Christmas album when finished. Sarah #12

It’s got to hear you’re keeping busy....it keeps you out of mischief 😉 We just need a bit warmer weather and you can enjoy your new outdoor activities....I’m really looking forward to seeing some sunshine now.
Have a great week my friend.
Hugs,
Annie x

Loved that series of the girl with the dragon tattoo. I have never heard of the group on desk clearing. My desk cleaning was motivated by loss of scraps and pens. have an enjoyable time reading and creating Monica #30

fternoon Elizabeth. Oh my - everyone is so incredibly busy and productive this week! Makes my two finished bags look amazingly dull and lazy. Well done you on all you have achieved!!!
Take care. God bless
Margaret #4

I have to check that link out! I need some oomph! LOL love the mug! I am truly more busy in retirement! #35

The days fly whatever your age, I can hardly believe it's nearly Easter already....how did that happen!!
Love the idea of clearing your desk of scraps, I know I'd have double the amount of room if I could do that.
Happy WOYWW
Hugs Lisax #22

I'd love to have the opportunity to be retired and find out how my days will be filled... lol! if only! Have a good week. Helen #1

I totally get it. I don’t work. But I seem to! Wouldn’t change a thing though, love being an Apprentice! I think the book will stand alone, I’m sure you’ll enjoy it anyway. I listened to Game of Thrones and all the others in a row....only to discover that I’d got them quite spectacularly out of order. Made no difference as far as I could tell!!!
Very productive scrapbooking, that Shimelle, she’s a clever gal.

Good morning, Elizabeth. I so get the 'retired' thing. I decided I 'retired' so I could be busy doing things I ENJOY. Love the layout. Have fun with Shimel's classes! Creative Blessings! Kelly #25

Hi Elizabeth, I didn't realise there was a sequel to The Girl with the Dragon Tattoo. Will have a look for that. Hoping the weather continues to get better as it was quite nice today. Late this week as I'm still trying to get back to normal after the trip away. Have a great belated woyww, Angela x17x

Hope you are feeling better. I am with you on retirement - Where did Wednesday and Thursday go? Guess I was busy with Ben, Max and maybe even a bit of housework - ha ha but not much!! xx Jo

I agree retirement isn't for the weak and weary! I stay busier now then I ever did before I retired...if it wasn't for all the medical issues it would be awesome! I am hoping that this week of weather here in OK heralds a change in seasons! It has been a miserable month of cold weather...worse then in the previous 5 years. My electric heating bill proves that. Spending Saturday having a look around blogs! Have a great week! Vickie #6