Again! Two posts in one day. It's not like me but I just remembered in time that we are at the end of yet another month and I've almost missed Rudolph Day over at Scraps of Life by Scrappymo! So here's my card for March. 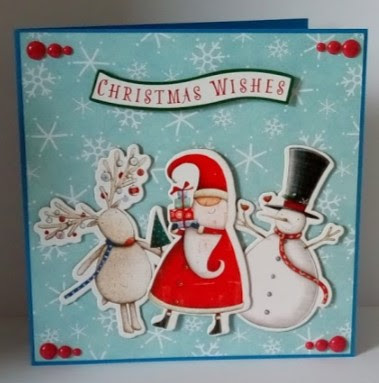 Being time short it had to be a quick make.

I used the following:

- a 6" square card base created from blue cardstock

- blue snowflake patterned paper from The Night Before Christmas 8"x 8" paper pack from Trimcraft, trimmed to 5¾" to for the background. That pad is old, 2015.

- three die-cuts figures from Docrafts Papermania Noel collection, old too, which I arranged on the card using glue gel and sticky fixers so that Santa is raised above the deer and snowman. This is a card with dimension.

- the greeting banner, also from the Noel collection, is attached to the card with sticky fixers.

As seems to becoming the norm, Rudolph Day sneaked up on me this month so only the one card but at least this one comes with an idea for a few more. The Noel die-cuts have been in my stash for several years. Much as I like them I could never think of a use for them until now, however, they clearly make perfect cards for children so I'll be making a few more for those lovely great-grandchildren of mine.

Thanks for popping in and happy Rudolph Day to you.

This trio has a very folk art feel and would be perfect cards for the grandchildren. Best of all is that you were able to use some VOS (very old stash) and i know that must feel good.

Your card is lovely and thanks for taking part in the March Rudolph Days Challenge.

This Elizabeth is so cute x

A fabulous card, Elizabeth! I love it!