Another layout from Shimelle's class, Clear The Desk, today. I've got this page out of order so although this is the third posted it is, in fact, the second one I made. I obviously had a senior moment! 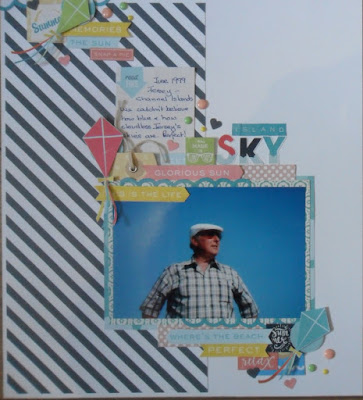 And that's not the only senior moment I've had recently. The white cardstock I've used for the background is actually short by an inch, it's 12"x 11" and I didn't even notice until I came to crop the photo. I must have cut the inch strip off for some other project and forgotten about it. I'll have to fix that sometime but I need to think about it first. I'm still using the same kit as for #1. The striped panel is the B side of a cut-apart from Echo Park's Summer Party collection giving, I think, quite a different, though still summery, feel to fit with the photograp. It's of my husband against the bluest of blue skies taken in June 1999 on the island of Jersey. It's framed with two layers of patterned paper in shades of aqua. The kites in the clusters were fussy cut from another of the Summer Party papers. Some of the shapes, circles and hearts, were punched out of the leftover scraps from layout #1. All the other embellishments and the title letters, with the exception of the enamel dots, are from the sticker sheets in the collection.

Happy crafting to all.