In A Vase On Monday on Tuesday - More Tulips

I've had a few days away from my desk, taking advantage of the wonderful weather we've been having to potter about in the garden - cutting back and pruning, planting out new plants, and just generally tidying up. Not to mention the time taken just sitting, looking and taking in all the new growth the warmer days have brought with them. 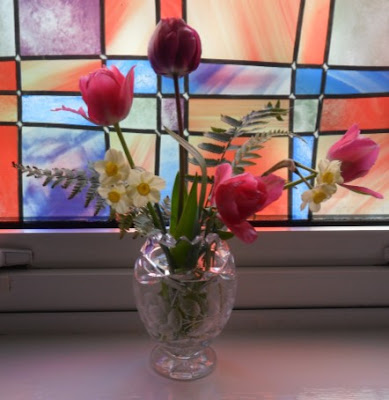 The tulips are doing so well this year I didn't mind cutting a few more for the vase this week. That would have been the one for Cathy's meme  In A Vase On Monday if I hadn't run out of time yesterday so it has to be a Tuesday vase instead. 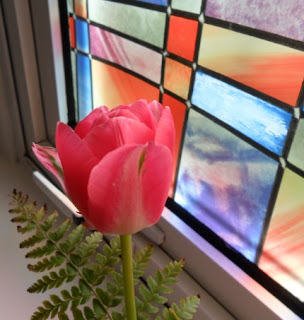 The three pink tulips are an old favourite 'Angelique'. They've been in the same pot - keeping a clematis, C 'Princess Diana', company - for three years now which could be the reason they are so tiny. I think the time has come to rescue and replant them. 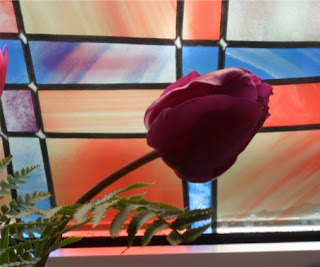 The name of this mauve tulip is a mystery. Looking back to a post dated 20th April 2015 I'm reminded that my husband sneaked these into a bag of 'Angelique' and 'Sunlover' bulbs before they were planted into the pot. The foliage, Dryopteris atrata 'Buckler' and Polystichum braunii 'Braun's Holly Fern', was cut from the new fernery which is coming along very nicely. 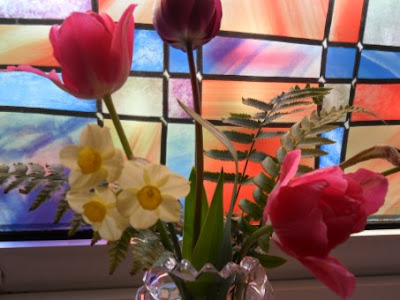 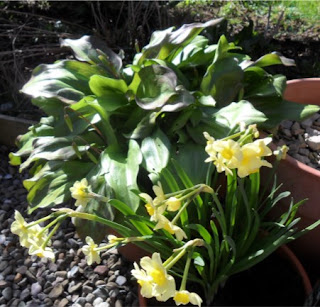 Now it's confession time. In last week's In A Vase On Monday I named the tulip buds used in the vase as 'Sunlover'. 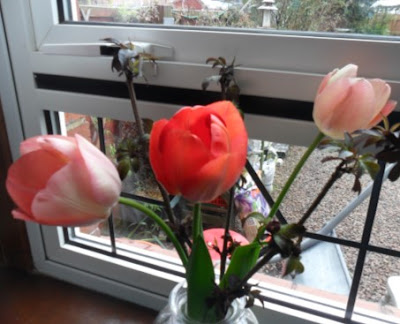 Wrong! I've no idea what they are called, planted by my husband and so not labeled, but it is definitely not 'Sunlover'. In fact, there are clearly two different varieties, one peach, the other orange. 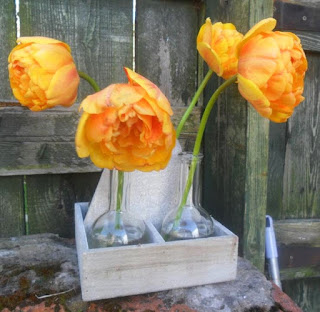 This is 'Sunlover'. Totally different. And as they are a late blooming tulip they might feature in another vase later in the month.

I know I usually show a few close-ups of plants from the garden but today I thought I'd share a couple of long shots so you can see the mess that is our garden - there's still such a lot of weeding and tidying to do!


There's more but I think this post is quite long enough. If you're still with me this far you deserve a medal!

Since the weekend the temperature has taken a dip - quite a shock after the t-shirt weather we've been enjoying. While it was so nice we took the opportunity to prune the old buddleja davidii right back and plant up two new clematis, purple C 'Dorothy Walton' and pale pink C 'Hagley Hybrid', as well as potting up more pansies and bellis. There's a few outstanding jobs to do and after a trip to the local supermarket today we now have another new clematis, this time the white C 'Gillian Blades', winter windflower, anenome blanda, in shades of blue and an alpine wallflower, erysimum 'Bowels Mauve, to find a home for and plant out.

Your garden looks lovely, Elizabeth. I really enjoyed all the flower and bulb photos but especially the long shots!

I am now in love with that very ruffled tulip that was your last tulip shown. I think it was Sunshine...gorgeous!!!

So much to do in the garden and so little time to do it! Your tulips are lovely, whatever the variety - perhaps you need to train your husband in labelling...?! Is your stained glass 'real' or is it a stick on vinyl like we have on one of our doors? It makes a great background, whichever it is