I don't know where the morning has gone let alone the week but, once again, I've certainly had much to smile about.

On Saturday we took one of our trips out. This time to the Crawick Multiverse and the Tolbooth Museum in the village of Sanquhar (the name means old fort). Warning - this is a photo heavy post!

The Multiverse proved to be an amazing art installation commissioned by The Duke of Buccleuch to pretty up an abandoned open cast coal mine on his land. It took one million pounds and the imagination of the well-known landscape artist Charles Jencks to create this fantastic cosmic landscape. It also proved to be a tad challenging for my poor husband who's big toe is giving him gyp at the moment. Here's just a very few photos taken that day. 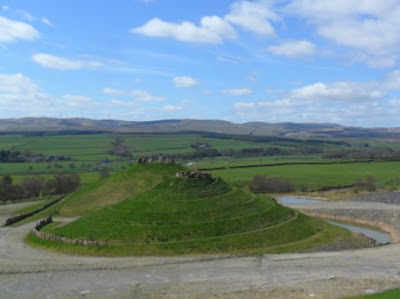 This one represents Andromeda and the Milky Way which are, apparently, converging at speed and will meet it is predicted in four billion years time. The mounds are 20 metres high - we didn't climb them! 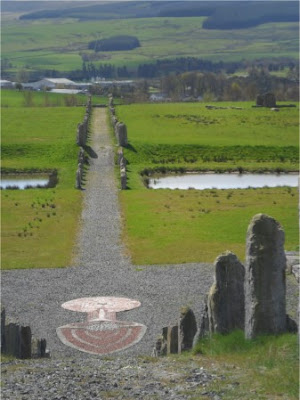 We did walk down this very long path, 400 metres, only to find that it was a dead end! It's a North-South line which splits the site down the middle. That's the Sun Flare/Earth Shield Mosaic in the centre of the Sun Amphitheatre that you can see in the foreground. It's said to represent the 'dance of life and death' between solar flares and the protective electromagnetism of Earth,

There's a lovely video with aerial views, on YouTube showing much more of the Multiverse. Here's a link should you be interested - I promise you won't be disappointed: https://www.youtube.com/watch?v=7YnEawc7aXM 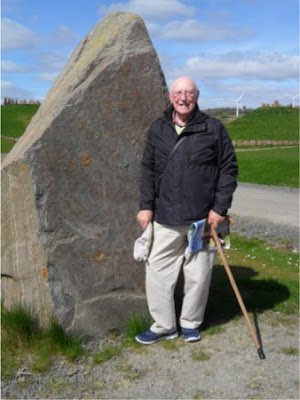 This is himself smiling through his pain. 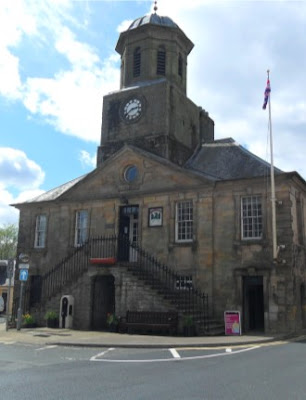 We left the Multiverse to visit the museum in the Tollhouse where we learnt a great deal about the village's past history, including the work of the famous Sanquhar knitters. 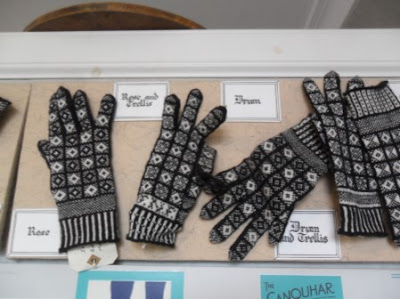 Originally knitted in drugget - a very cheap, coarse, wool - on very find needles and usually in black and white, they are now knitted a better quality wool and in a variety of colours. The distinctive feature of these gloves is that the wearer's initials are always knitted into the wristband. 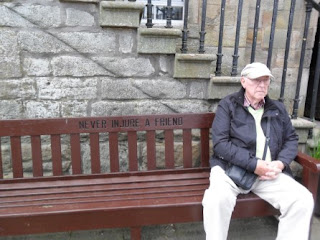 Himself again, looking quite miserable because of his sore foot. Do you think he is trying to tell me something - the quote on the bench is 'Never injure a friend'!? 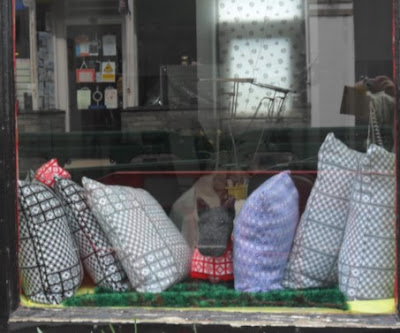 In the village itself there's a shop that still sells Sanquhar knitting however these cushions were knitted on the machines that are just visible in the background. 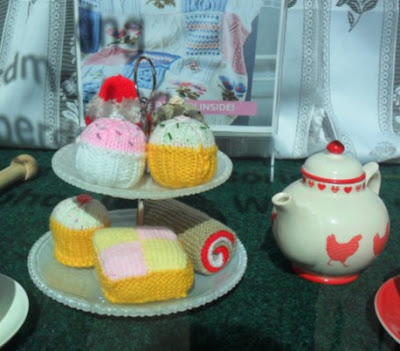 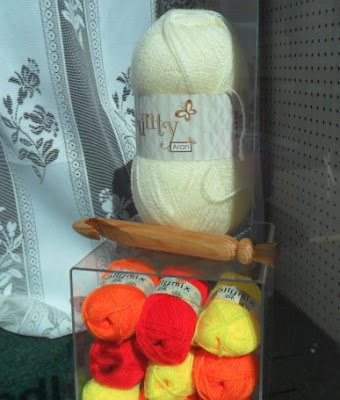 And possibly the biggest crochet hook in the world - with a thistle atop it too.

Enough! I could show you so many more photos - the whole day was wonderful - and I haven't even begun to cover all the nice things that have happened during the rest of the week.

I hope you have had a lovely, smiley, week too.

I so enjoyed your photo's Elizabeth. I used your link to find out more and to find out where exactly this place is since I had no clu. The names did make me suspect something but I wasn't sure. very interesting, thanks for sharing.
A get well to your hubby with his foot. hugs Veerle

That looks like a wonderful outing. Really hope your dearest other half doesn't suffer too long. You need to be able to really enjoy your days out. Sending lots if get well hugs your way for him.
Hugs,
Annie x

Fabulous trip Elizabeth, the museum was closed when we were there last year. Wonderful knitting, too complicated for me, pleased you had such a good time, Kate x

What a lovely outing. And a shame that your dearest was suffering with his toe. I do hope he has had it seen to and has recovered now.
I just watched the video of Multiverse. Awesome!
And that knitting is amazing! It certainly is an art. I love knitting but I don't think I would enjoy such very fine work.
Have a good weekend,
Keep smiling,
Lisca

What a lovely day out you had, Elizabeth! I checked the Youtube link - what an astonishing, fabulous place! Your photos are lovely (my fave is the knitted cakes lol! Yum!)

I hope Himself is on the mend.