This should have been a Sunday Snippet post for Pixie's Snippets Playground, Di's very popular challenge, but the weather was much too good to keep me indoors at the weekend, especially when the garden is needing a lot of attention right now. Anyway, here's the card at last. 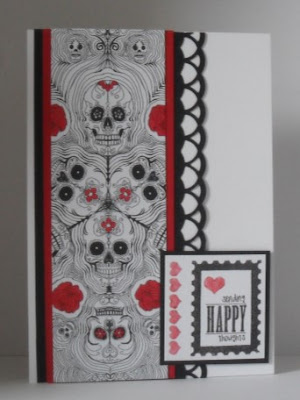 The skull panel started off life as something quite different. It was a bookmark enclosed with a book from the Book Depository, One of a series of bookmarks designed by the Book Depository's fans this one was created by Eduardo Taborn Espejel of Mexico. Curious about the origins of these skulls I did a bit of online research and discovered that in Mexico they are called Calavera de Azucar (Sugar Skulls). They are associated with the Day of the Dead (Dia de los Muertos) and are said to represent the departed. So much so, they are painted and decorated and the names of the ancestor is added to the forehead of the skull and then they are placed on the gravestone to encourage the departed loved one to appear on the Day of the Dead. Fascinating! And I know one young woman who will really appreciate Mr Espejel's artwork.

Here's a couple of photos of the supplies and tools used to make the card: 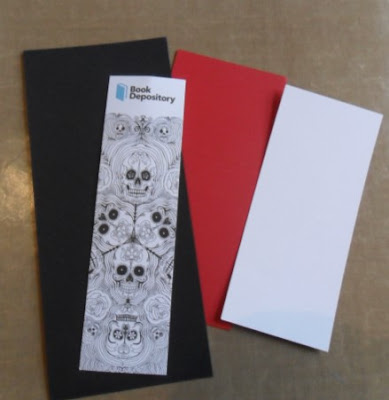 The bookmark and a selection of black, red and white card scraps. 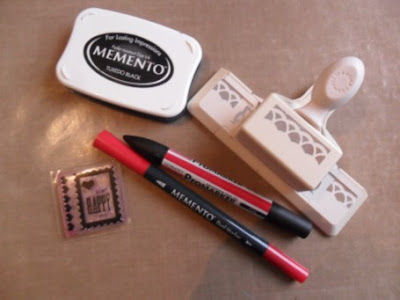 I used the Poppy Promarker to colour in the flowers on the skulls and I coloured the stamp, a freebie that came with an issue of Craft Stamper some time ago, with the Memento Tuxedo Black ink pad and Memento marker Lady Bug. It was stamped on to a snippet of white card before matting it on to a snippet of black card. The Martha Stewart border punch, an oldie but a goodie, was used to create a border down one side of the black card. After colouring the bookmark was trimmed to size and matted on to the strip of red and black card, also trimmed to size, before adhering it to the front of a standard A6 white card base.

I've been to the craft club this afternoon and completed another row of embroidery in the sampler I'm working on at the moment. I also signed up for another quilting class starting in September - I'm just a glutton for punishment :)

Have a lovely evening.

We've certainly had some lovely weather so I'm sure your garden is up to scratch now. Brilliant card. We get these bookmarks sometimes but I hadn't thought of doing this. It's all put together beautifully.

Great card Elizabeth - sugar skulls fascinate me and I love the red, white and black together! Good to see you using a MS punch as well - I keep forgetting I've got quite a few of those!

Great to see you in the Playground.