Today I have a card made for the November UKPC Swap. It got forgotten because of our really bad December and only rediscovered today when I was tidying up computer files, moving last year's photos into a 2016 folder. 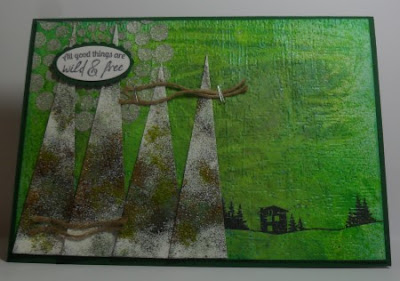 The challenge for this Swap was to interpret the sketch below.

As you can see the sketch is portrait but inspiration didn't come until I switched it to landscape. I could then see that it was clearly a mountain scene - snow capped mountains in the moonlight, of course!

Since making the card the list of materials has gone missing and, as it could be anywhere now, I'm going to have to rely on my memory - that will be fun :) 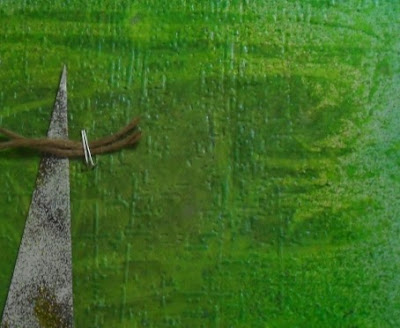 The background, a piece that had been tucked away in my stash for a year or so, was made using cling film and Cosmic Shimmer Mists in shades of green, Meadow Lush & Blue Lime, and Rich Gold. Once it was trimmed to size it was embossed using a Textures Distress folder from Crafter's Companion. 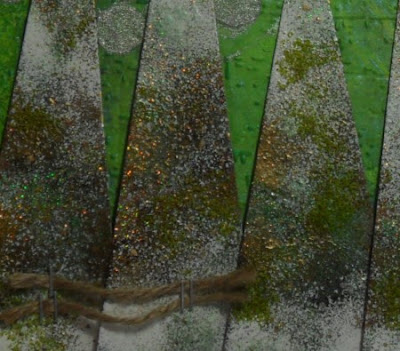 The hills were made using kraft card, trimmed to shape, and heat embossed in the style of Stampendous' Fran Seiford's famous Frantage, only I mixed up my own from a variety of powders already in my stash. They were, as far as I can remember, Papermania Seafoam White, Heat It Up! Gold & Silver, Sheena's WOW! Lime light and I added, for even more texture, a scattering of Flower Soft Sage, 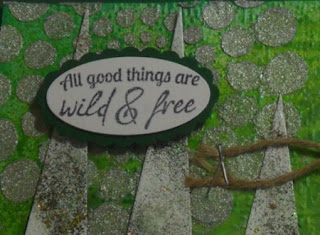 The 'moon' was created using a Clarity Circle Dot stencil and Pinflair Silver Buff-It which has a nice gritty texture with a glittery finish. The sentiment is from Clear Impressions' The Wild & Free stamp collection from an issue of Get Stamping.

Also used is in the background is a stamp of house and trees from the Winter Wonderland stamp set, a freebie from Creative Stamping Magazine, Issue 36. For embellishments I simply used some natual twine stapled into the positions suggested on the sketch.

That's all as far as I can remember but I'm sure to have forgotten something. As I said, I did note everything down at the time. It's probably long gone, a casualty of my frequent tidying sessions. That being so, if there is anything I missed that you want to know more about do let me know, I'll do my best to answer any questions.

In the meantime, take care, stay safe and have a great weekend.

A brilliant interpretation of the sketch. Your mountains are wonderful and you have lots of lovely texture.