I have a quick share today. I've been sorting through my stash of made cards and noted that it's low on quite a few categories - most notably birthday (male & female), sympathy and thank you cards. 'Thank you' cards being particularly needed at this time I sat down to make some. This is the first. 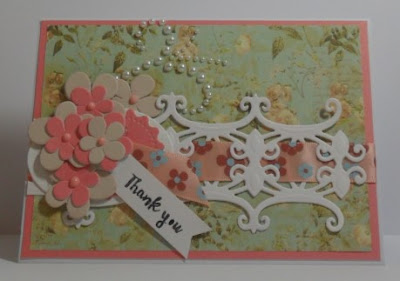 I was able to use lots of materials that I've been hanging on to for far too long and a beautiful new die too - the Tuscany Strip makes a very effective band.


For inspiration I used the photo on the Spellbinder packaging. It was a good starting point but I now have a few more ideas of how it could be used.

Apologies, yet again, for not having been around much this week. It's been another sad one for us. My sister-in-law died Thursday afternoon. It wasn't totally unexpected, she'd been ill with Alzheimer's for some time, but her health took a turn for the worse recently. What makes it doubly hard is that it is only five weeks since her youngest son died.

I see from the news that many of you are experiencing the worst of weathers. We only had a smattering of snow a couple of days ago but since then it has brightened up and today we have sunshine, blue skies and fluffy white clouds but it is FREEZING! I don't want to wish my life away but I so look forward to the time when we have warmer temperatures.

Oh what sad news Elizabeth, very sorry to hear it and to loose your nephew as well. Altzimer is such a cruel disease for all concerned.
Love card such beautiful spring colours and design. They way the weeks are speeding by, it won't be long till the warmer weather comes in,Kate x

I really am very sorry to hear about the recent sad loses in your family Elizabeth. It's certainly not a to start to your year.

Your card is lovely. Very pretty colours and a beautiful design. Barbxx

Sorry to hear of the loss of your sister-in-law and her child.
That is a lot for her family to cope with in such a short timeframe!

Your card is so pretty. I like the border die and it looks so pretty with the wee bouquet of flowers!

That is a gorgeous card!

your card is just lovely with all of those beautiful die cuts, flowers and colors! So sorry for the overwhelming losses in your family :(