In A Vase On Monday and a Little Garden Chat

In A Vase On Monday - A Last Hurrah

Monday is when I try to join Cathy at Rambling in the Garden for In A Vase On Monday. I don't always make it, sometimes missing it altogether and occasionally making it a day or three later - as I did last week - but this week I've made it, just! 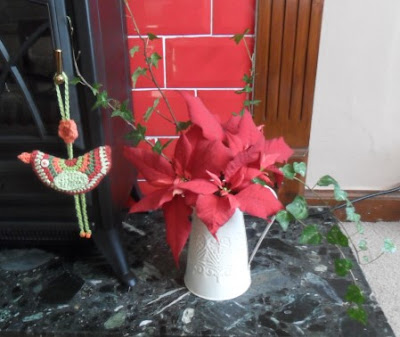 It's almost February and it has been feeling almost springlike but there's still very little colour in the garden so I've cheated a little today. I've added a few stems cut from a red Poinsettia, Euphorbia pulcherrima,  a gift from our grandson we've had since before Christmas, to a jug containing some ivy, hedera. 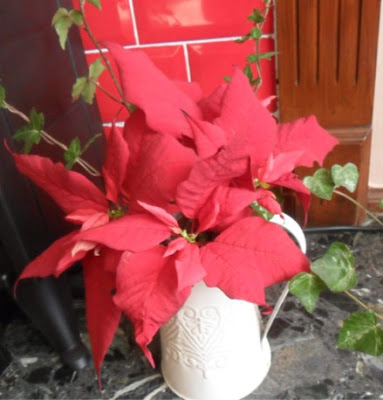 Sadly, the poinsettia was losing its leaves and starting to go over so I thought to give it a last beautiful hurrah - hence the title. The ivy has been around for at least two months, maybe longer, forming part of a much earlier arrangement. Ivy has a way of going on forever and these stems have started to form roots! 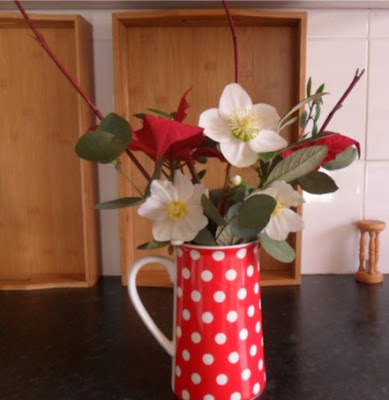 Last week's arrangement which made a late appearance on Thursday also contained euphorbia, E, x martinii 'Ascot Rainbow'. By this morning it was all shriveled up and looking very sad so I've replaced it with what was left on the poinsettia and a few flowers from two new hellebores, H. niger - the taller one - and H, niger 'Christmas Carol' - the two shorter ones. 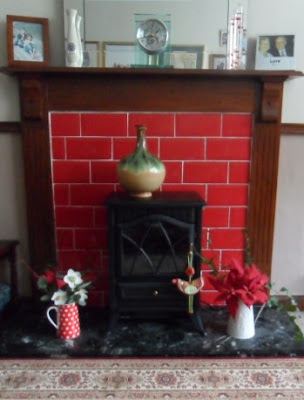 Here they are, the two vases on the hearth - very festive looking. A little bit of Christmas lingering on. The bird dangling from the fire door was crocheted by a very talented friend.

We've had some lovely weather recently, lots of blue skies and sunshine - spring isn't too far away. Because of this unseasonable warmth there's lots going on in the garden. Seeds sown in the autumn are now peeping through and it won't be too long before the daffodils are in flower - I can just see signs of colour peeking through.
This bed has, so far, proved to be difficult. It's shady and damp, up against a brick wall, and rarely sees the sun. There's been a shrub or tree, maybe a climber, growing there at one time but all that's left is a stump and there is an established clump of comfrey too but otherwise nothing. Last year I tried to cheer it up with forget-me-not and nasturtium but with little success. I'm told that the conditions are ideal for ferns so after a trip to the garden centre on Saturday we now have the worlds tiniest fernery!


I'm having no luck keeping hellebores in the garden. I've tried growing them down in the woodland area but they just don't do well there although the conditions should be perfect for them. It's a shame because they can brighten a shady area beautifully and look stunning growing in drifts. Anyway, given my lack of success you would think I'd resist the temptation to buy more. Not so! I left the garden centre with two more which, with the one survivor from last year, I intend to grow on in large pots where they will be cossetted. 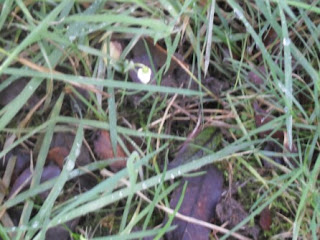 Finally, not the best of photos but here's our first, much anticipated, snowdrop, galanthus nivalis, of the year! I'm totally delighted to have snowdrops established in our garden and it's all thanks to the generosity of Cathy.

The hellebore and the polka dot jug are a perfect combo with the euphorbia... and red for the Chinese New Year!

Oh these are perfect for your red themed fireplace, Elizabeth, both of them - lovely red spotted mug/jug too. I could send you some baby asplenium ferns if you like, to add to your new fernery - just let me know. Glad your snowdrops are doing well :)

A perfect picture, it could be a Christmas card or a greeting for Chinese new year. The mug arrangement is my favourite.

A good idea to save the poinsettia like that. Your ferns will like their new home. I've always grown hellebores anywhere I could fit them in and they have grown happily in full sun. They are so inviting in the garden centres at this time of year, i hope they do well. I will, like you, keep buying plants which don't like me. Gypsophila is one, I must have had about 6.