It's Monday again and that's the day we get to join in with Cathy's meme, In A Vase On Monday. Admittedly it is late now but I've been out in the garden for hours working my way through a list of jobs that were long overdue. What's more, after the horrible weather we've had so far this summer, it was a real pleasure to get out there and actually enjoy just being in the garden again. And, of course, I found some time to cut the flowers for this week's vase while out there. 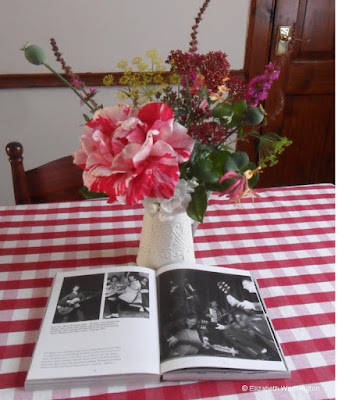 My first choice was this beautiful rose. Grandiflora Rose 'Rock 'n' Roll' is a striking striped rose of white, cream, red and cherry stripes and it's fragrant too. The name of the rose prompted me to take this book, A Photographic History by Nick Yapp, down from the shelf and open it out at a page of photos of rock idols of the fifties. I remember them so well. 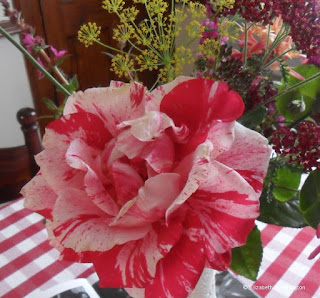 I don't usually like big overblown roses but I do love 'Rock 'n' Roll' hence the title of this post. 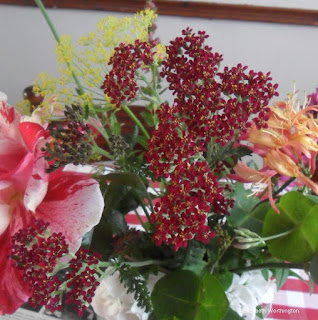 To compliment the rose I added Achillea 'Cassis' - much more cherry coloured than it looks in the photo - dill, Anethum graveolens, and honeysuckle, Lonicera 'Gold Flame'. I did have my eye on a larger spray of honeysuckle but a big beautiful busy bee seemed to have a prior claim so I had to settle for this smaller one. 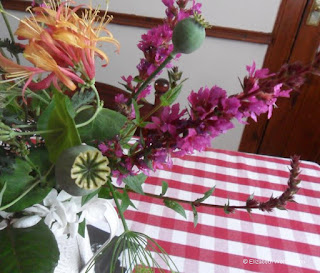 I also found some cherry coloured Lithrum 'Robin' that I thought would look good in  the vase and added a few poppy seed heads just because I like them. 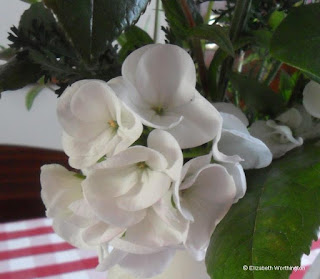 Finally, I couldn't resist adding a couple of white Pelargoniums around the base of the arrangement just as a finishing touch.

If you liked my vases this week, you might like to pop over to Rambling In the Garden where you can see Cathy's vintage mood arrangement.

Very pretty, Elizabeth! I don't usually like the striped roses but I like 'Rock 'n' Roll' a lot.

What a gorgeous rose & beautiful bouquet!

We've both been able to go out into the garden this week but for different reasons; for you it's stopped raining but for me it has cooled down and at last it is a pleasure to be outside again. Very pretty arrangement.

That's an amazing rose, although I am not sure I can imagine a whole bushful of them! The other blooms work well with it - love the achillea and having just bought one I hope I can get it to bloom as I have struggled with them before. I am enjoying the book you sent, by the way!

Gorgeous flowers Elizabeth, you must have an amazing garden! Cathy x

I am finding all sorts to cut and add to vases thanks to this meme. I love your vase, and the addition of the white geraniums is an inspiration. Thanks for sharing.

I love and collect striped roses, but I don't have that one. It is big and fluffy, and so elegant with the darker Cassis. I like the spiky additions of the Lithrum and the poppy seed heads too.