In A Vase On Monday - Bright and Soft Pastels

It's Monday and time to join in with Cathy's meme, In A Vase On Monday. Unfortunately, I missed out on participating last week so I thought I'd share two vases this week. There's a profusion of flowers in the garden at the moment, so many that I find myself spoilt for choice. Consequently, I'm gathering armfuls to either give away or fill as many vases as I can and there's so many it's hard to limit myself to sharing just two but here's the first. 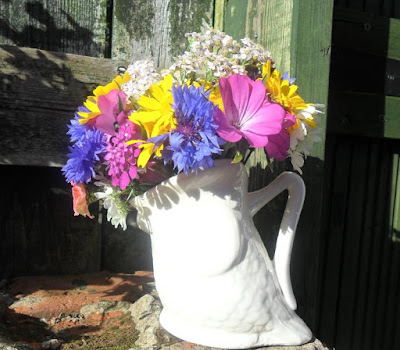 The bright pastels. With the exception of the achillea this very colourful bunch came from the annual patch. 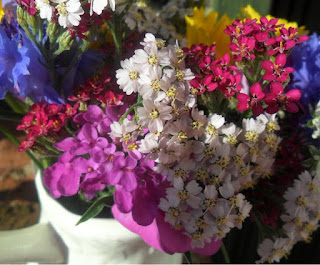 I don't recall sowing the white achillea ... it is growing beside the chives, a place I would not have put any seeds, so I think it may be a gift from one of our feathered visitors. The cherry red one is Achillea Cassis 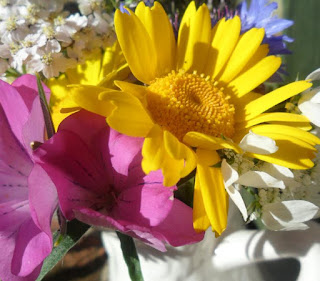 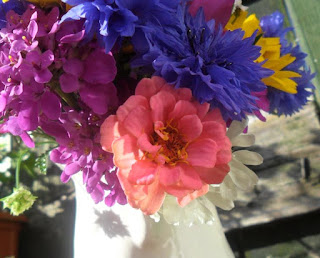 Cornflowers Centaurea cyanus, candytuft Iberis and Zinnia 'Jazz'. This is the first year I've tried growing zinnias from seed and they haven't done well. Such a shame because I do so love them. 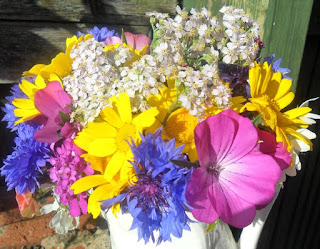 This is such a cheerful selection is would brighten any spot in the house.

The second vase for this week is in total contrast to the first. 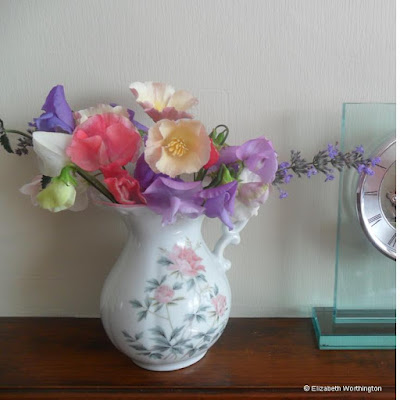 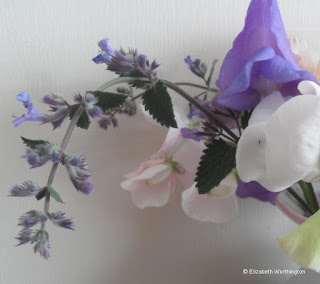 The catmint is hard won. A cat from the neighbourhood, or maybe more than one, has taken a great liking to our catmint. So much so that it almost decimated the plant in spring just as the new shoots were beginning to appear. To save it my husband constructed a cage of wire mesh around the plant. This hasn't stopped the cat entirely, it now sits on top of the cage and just waits for the shoots to emerge from the wire cage, but there's enough strong growth left to allow for the picking of a few flowering stems. Oddly, our own dear cat is not in the least addicted to catmint! 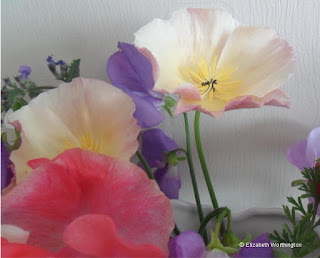 The Californian poppies have a delicate beauty ... creamy white on the inside and pink on the underside ... truly delightful 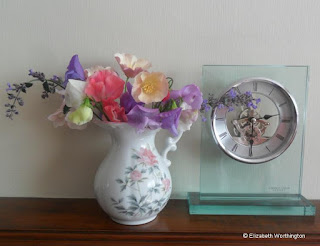 There we are, two vases selected for this week - both quite different but both, I think, equally beautiful. and for something even more different again do pop over to Rambling in the Garden where Cathy, the mistress of props, has a stunning arrangement to show us.

Oh, and any plans I had to spend time in the garden this afternoon has just been scuppered. After a bright and sunny morning, it is now raining ... not just a gentle summer drizzle but a right old downpour!

Email ThisBlogThis!Share to TwitterShare to FacebookShare to Pinterest
Labels: flowers, in a vase, photographs

Elizabeth these are both beautiful...the first with bright blooms against the white vase....and the second perfect pastels that look perfect in this pitcher....just a delight! Love the garden as it just gives and gives now!

Two stunning vases of beautiful flowers, Elizabeth! I can almost smell the second one! We lost our cat mint a few years ago for the same reason. Those poppies are really beautiful - almost rose like in their colouring

How nice to have such a range of flowers to choose from! Both vases are wonderful, although I admit a preference for the silky blooms in the second one. I've had difficulty growing catmint in my garden too. The neighbor's cat ate all 3 of my plants to the ground soon after they were planted - I spotted him lying in a near-stupor in the backyard next to what was left of the last plant. He lives 5 houses away so how did he know I had catmint?!

Beautiful flowers such a joy to see

I like the exuberance of the bright flowers, but the trailing purples in the second vase, and flowers matching the pink vase flowers, have a more elegant and romantic feeling to me, so lovely.

these are lovely flowers and vases. I've got sweetpeas in my garden this year too - wonderful scent. I've gone for oranges, yellow and reds in my vase this week. have a lovely week and enjoy the sunshine
love bec xx

I love the brightness of the first but then I saw the Californian poppies in the second - they are beautiful! I have grown them for the first time this year, a red and a creamy white one too but not with the pink undersides like yours. Do you know what variety yours are? I am hoping mine self seed as I have been thrilled with them. Thanks for sharing today