In A Vase On Monday - A Trio of Colour

Monday's have become my day for joining in with the In A Vase On Monday meme, hosted by Cathy over at Rambling in the Garden, because it forces me to take a trip round my garden, weather permitting, and gather flowers to bring indoors. After complaining last week about the slim pickings just look at what I found this week. 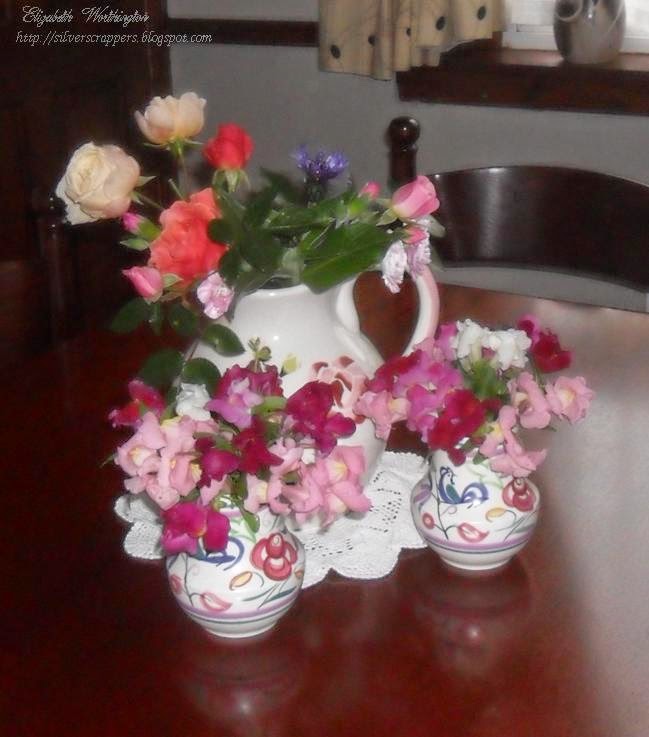 Would you believe I've been ignoring these dwarf snapdragons, antirrhinums, even though they have been putting on a wonderfully colourful show, in various shades of pink, red and white, from early summer ... and are even now showing no signs of letting up despite the recent sharp drop in temperature. 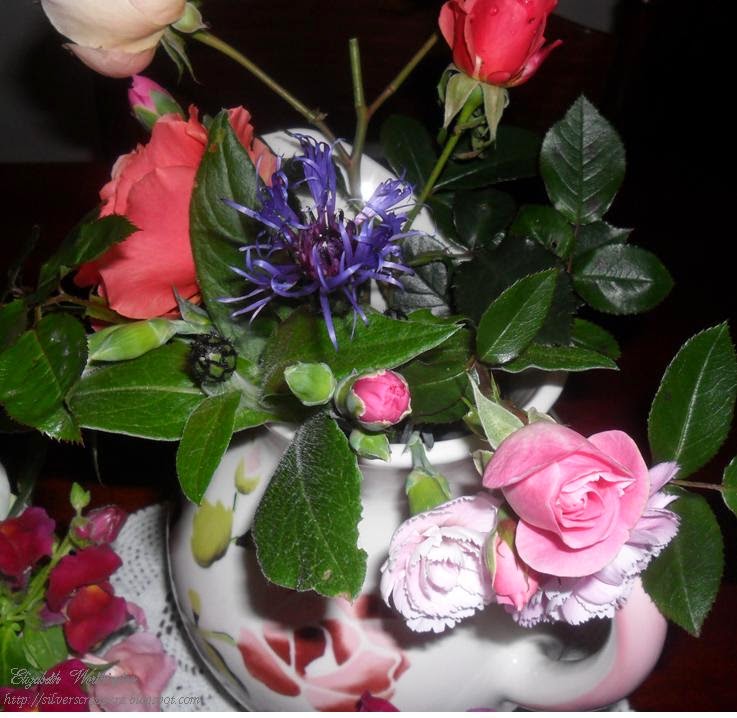 They were planted in a dry shady spot caused by two large evergreens ... I suspect they were both planted as dwarf evergreens back in the seventies when they, together with heathers, were at the height of gardening fashion here in the UK. 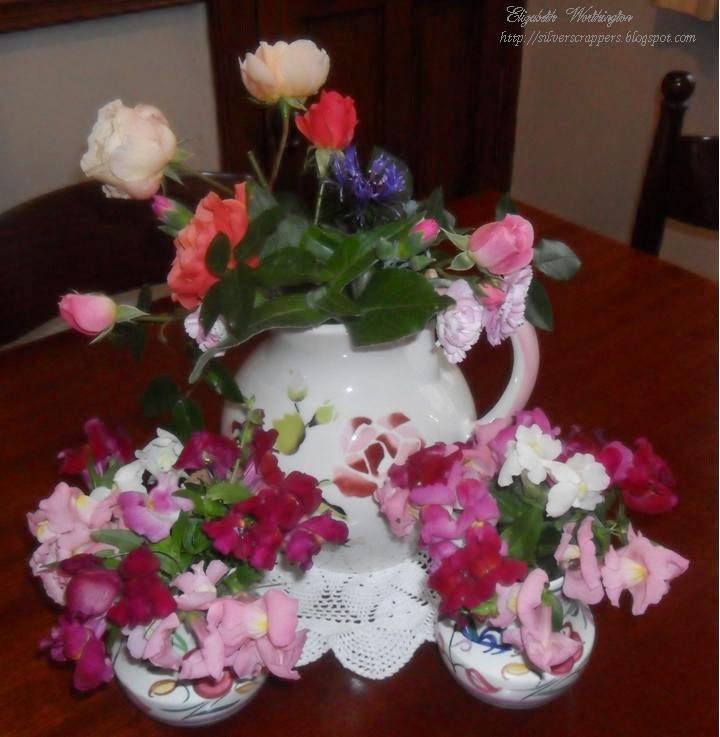 I couldn't resist picking and plonking some of the roses and the cottage pinks (Valda Wyatt) that just keep coming - that's Carefree Days at the front, Simply the Best in the middle, and Elina at the back - and a real surprise, mountain cornflower, Centaura montana! I thought this plant had finished flowering for the year but, happily for me, cutting it back has encouraged it to bloom again :)

I've simply put all three vases together  for the massed effect on the dining room table. The two smaller vases were bought many years ago at a church table-top sale for an amazing 50p each - a bargain! It wasn't until I got them home that I discovered they were Poole Pottery. The roses are in a hand painted jug, from Thailand, that the EM spotted in a charity shop only last week.

Such a pretty display Elizabeth. Hints of summer going on there.

Such lovely antirrhinums, Elizabeth - I have just ordered seeds of a dwarf variety for next year. Can't believe your centaurea - mine just disappears after it finishes flowering. Great bargain Poole pottery - the Caithness glass I have bought at car boots are always cheaper if people don't know what they are. Great vases - thank you for sharing :)

Love the snapdragons, especially the dark red color. Mine didn't do very much this year. :(

My goodness Elizabeth, what a lovely pretty collection of flowers to find in the garden this late in the year.
Your Poole Pottery vases were a real bargain, they were made here in my home town and are probably quite valuable now as they no longer make them with those very recognisable patterns on them. I remember years ago visiting the pottery on a school trip and watching the women hand painting them.
Jean x

Hello Elizabeth, I have enjoyed your narrative but infuriatingly my internet speed is so slow tonight I cannot see your photographs, it sounds as if your cases were winners though! best wishes, Julie

So lovely Elizabeth is your floral display x

Hi Elizabeth, your cheerful and colorful arrangement is wonderful. Love all the snapdragons.

Sweetly pretty Elizabeth - it's nice to get details of the vases too. Amazing - you have pinks still in flower! And you treasure them all by name. Nice, thanks.

So pretty! I have some Poole pottery to match your vase Elizabeth :-) Mum bought it back in the 1960s. Very distinctive isn't it and I don't think it's dated after all these years.

Hi Elizabeth, the mini snapdragons are ever so charming and you've chosen the perfect vase for them! Delightful!

Pretty Elizabeth,
I love the new season of Spring and the first blooms in the garden are always to plentiful.
Enjoy!