I touch the brown page I tore from Gran’s old recipe book. Rough yet warm and powdery: like her hand was when she gave it to me. So old, this recipe. How many plates of soup have come from it? How many excellent thoughts?

“One large leek,” the recipe reads. I will find out what a leek is and dice it, so I will.
Helen Fitzgerald
Parts Beyond the Sky

I've just sneaked out of the kitchen - from preparing tonight's supper - to do a bit more sewing but I thought I'd share this with you ... 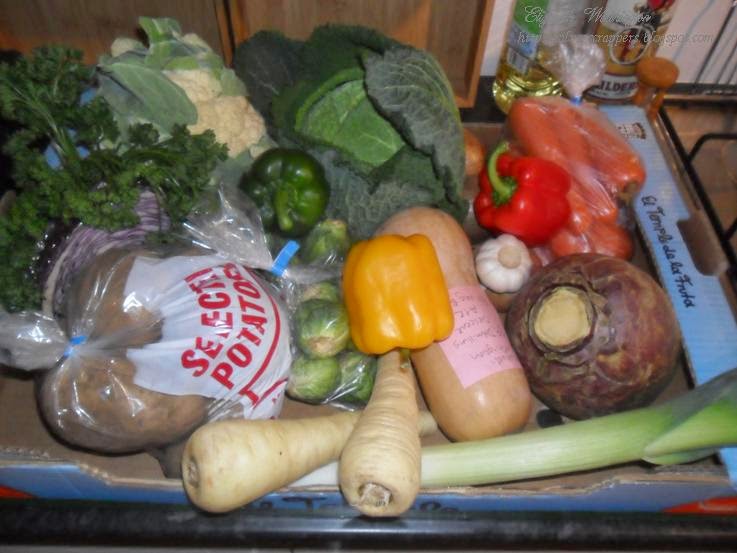 .... a lovely big veggie box. Delivered to the door. It's going to be a winter veg fest here at Casa Worthington over the next week or so :) 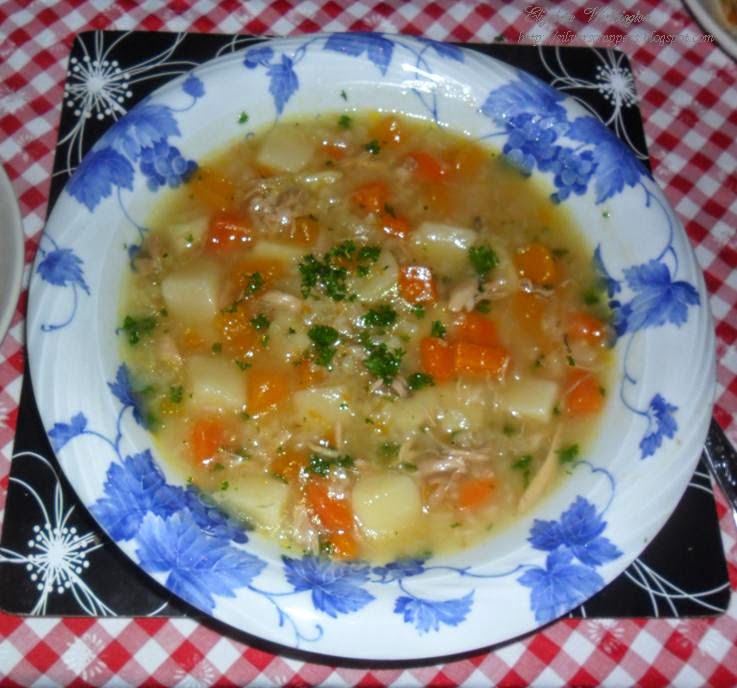 Starting with this soup. Not tonight's supper - I may share that with you another day - this we had yesterday and it's one of my favourite soups. I love soup and, given the choice, I think I could live on soup alone. Just so long as it's a different recipe every day :) I know not everyone feels the same way, the elder of my younger brothers for example. When we were kids he hated it so much he ate it so slowly my mother teased him for 'chewing the soup'!

This is one of those recipes that has been handed down to me, by word of mouth,  from my mother so none of the ingredients were actually weighed. Therefore, apologies in advance, none of the following measurements are anything other than approximate.

I use a pressure cooker to make my soups in but I know that not everyone owns or even likes pressure cookers so the instructions are for cooking in an ordinary pot.

Method:
Serve hot, garnished with the chopped parsley, and accompanied by slices of crusty bread.

Normally, I would use leftover chicken if I have it but as I didn't this time I cooked three chicken drumsticks in water with a bouquet garni (a teaspoon of mixed herbs would do) some chopped onion and celery and seasoning instead. This gave me both the chicken and the stock for the soup.

I hope you are having a thoroughly good weekend whatever you are doing, maybe it involves eating a tasty bowl of hot soup too :)

That's my idea of heaven too Elizabeth. There's nothing quite like a homemade veg soup is there? Yum yum.
Hugs,
Annie x

When can I move in? I too love soups and can live on them too. I have a huge pot of pumpkin soup I will trade you!
Thanks for the recipe. I have pinned it for later!
xx

Looks great Elizabeth - very inviting. We love soup. I make loads of thick vegetable broth ( in my pressure cooker) and then put it into pour and store bags and keep in the freezer.

What a lovely photo of your fresh veggies. I am with you on the soup. I could live off it too, for the Winter months anyway. I dish Chris´up like yours and then put mine in my super-blender because I like it smooth. You can´t beat it with a bit of crusty bread. Kate xx