Garden Saunter and In A Vase Monday - Think Pink ...

It's been a day of wet-and-wild followed by not-too-bad to dull-and-threatening! I don't think you would need two guesses to know I'm in Scotland :)

All that means that the trip into the garden to see what I could garner for the vase today was a quick one but there's still plenty to find despite us being into November ... here's photos of just a few:
Apologies for the blurry shots of the hollyhocks - it had started to rain by then and all I wanted to do was escape indoors again!

There was also a couple of real surprises to see too. 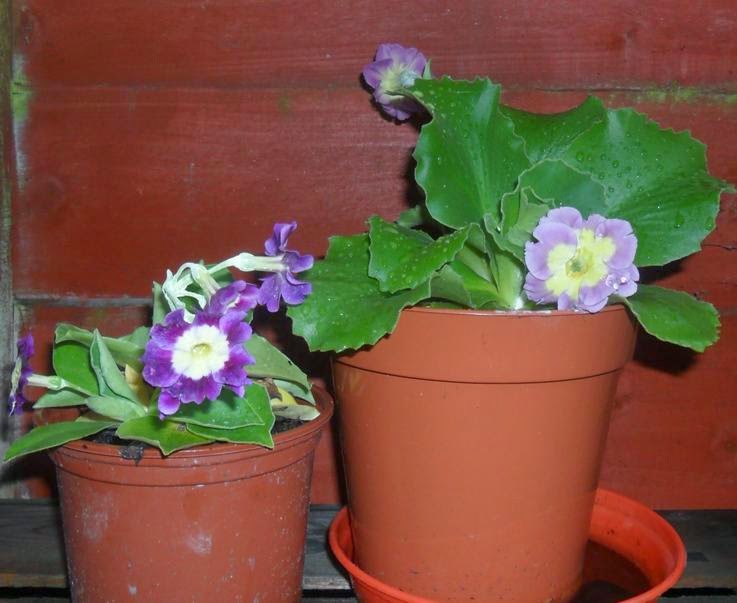 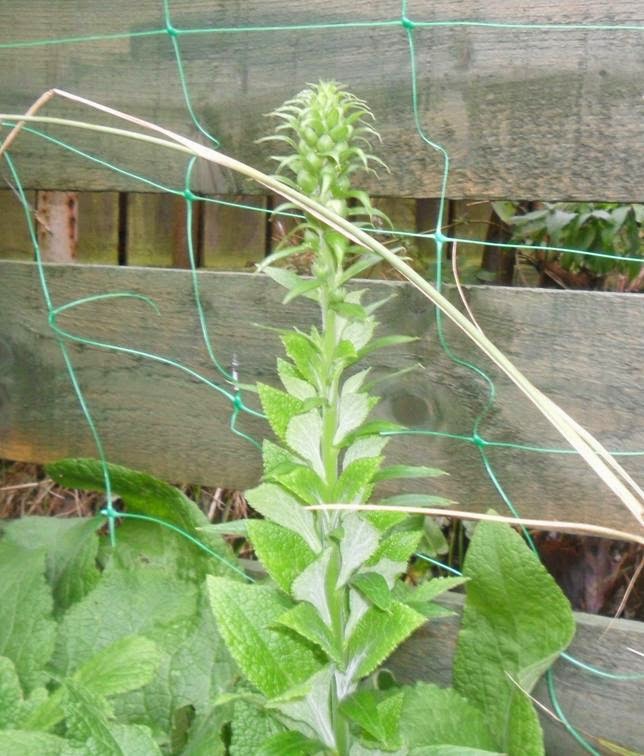 And a promise of things to come - Digitalis Digiplexis or Foxglove 'Dalmation Cream'.

I haven't been able to join in with Cathy's In a Vase on Monday meme, over at Rambling in the Garden for a couple of weeks - life just got in the way - so was determined to participate today.  As you can see it's a mix of pinks and roses - almost all pink! 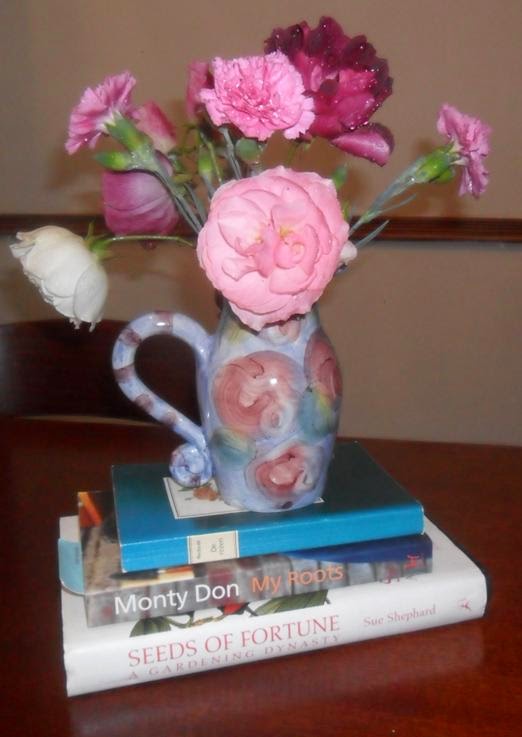 The pinks, 'Valda Wyatt', just keep on coming despite the atrocious storms and gales we've suffered recently. I rescued four from the rain and then raided my husband's round bed for the roses, 'Iceberg', 'Happy Retirement' and 'Burgundy Ice'.  I also pinched an idea from Cathy to perch the vase on a wee pile of carefully selected books :) 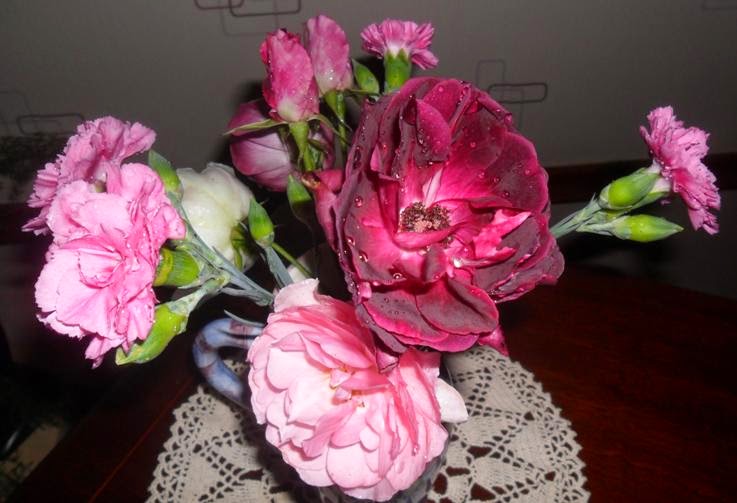 You might even be able to see the raindrops on the Burgundy Ice bloom - confirmation, if confirmation is needed, that it had started to rain when I picked these blooms.

Although I missed posting for a couple of weeks that doesn't mean I didn't fill a vase or two - here's last week's. 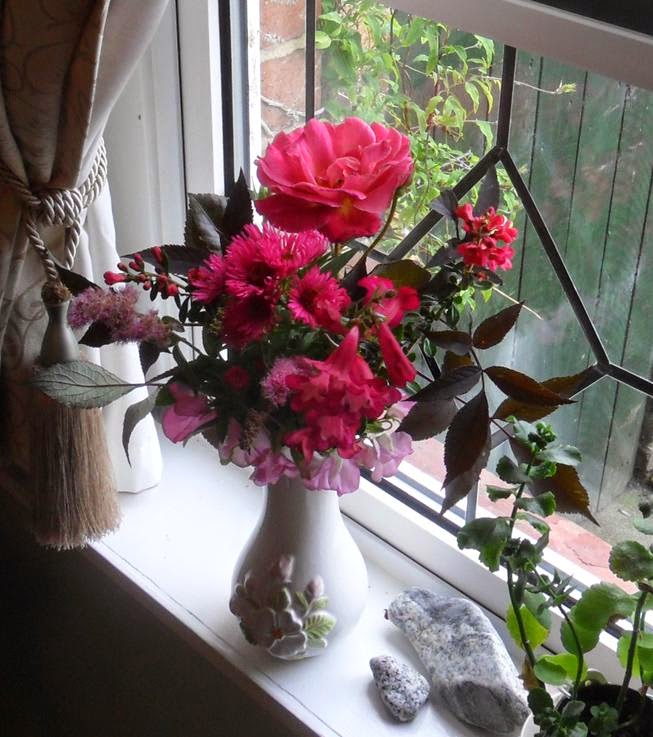 Before I go, I thought I'd celebrate our first year in the garden by showing you a couple of before and after shots. 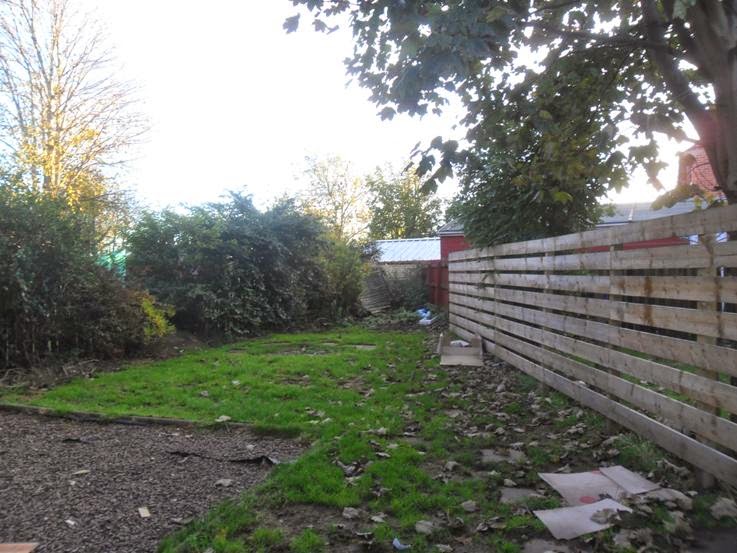 This is what the back garden looked like just before we moved in on November 14th, 2013. A depressing sight but I could see the potential even then. 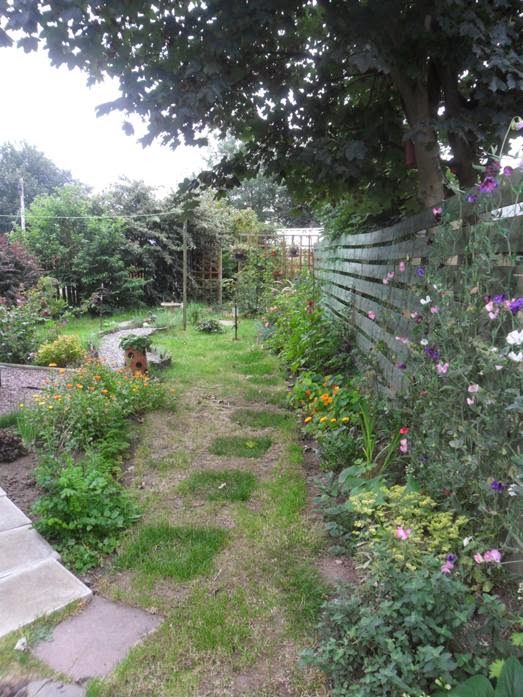 This was how it looked a couple of weeks ago - before Hurricane Gonzalo did his worst. 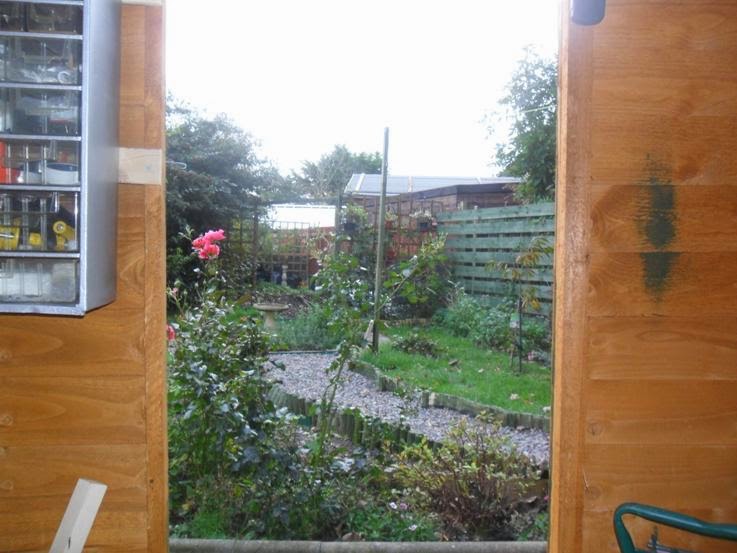 And this is the view from the shed yesterday morning. There's still a lot to do, I have plans , but I'd say it's coming along nicely.

After all that you might like to join in with Cathy's challenge too. If so, post your vase or container of pickings from your garden or similar and leave your link in a comment over at Rambling in the Garden - I'm sure Cathy would be delighted to see you.

In the meantime I wish you Happy Gardening,

I'm totally amazed by the variety you still have on flower Elizabeth. Afraid dispite having 2 acres of garden there is very little to show, a few roses and early Mahonia flowers is about it.

But as we head into Winter I always tell myself Spring is next - the eternal optimist with UK weather !

How lovely to see there are still lots of flowers still in bloom l know it's been mild but the winds didn't help yours have survived though! my gardens are waterlogged and l don't have any colour other than greenery from the trees it's lovely to see your post as always it's makes an interesting read and what a nice before and after part of your garden truly gorgeous it looks xx

You've certainly accomplished a lot in just a year. Love all your red blooms.

Well done for all you have achieved in the last year - it must be good to see things moving forward like this. And what a pretty little vase you have put together - I remember when I first started the meme it was many months before there was anything pink to put in a vase so lets enjoy the last of our pink blooms while we can! Thanks for sharing.

You've made your mark on the garden already. Isn't it amazing how fast the time passes? In December, we'll be in our current house for 4 years and, only now, I'm beginning to feel as though the garden is my own. I love your Asters and the other bright pinks!

Beautiful flowers today my favourite colour flower is pink. Even though I'm not a particularly pink person natures pink is so prettier. You've worked very hard on your garden its beautiful Love and hugs Carole x

Hi Elizabeth,
what a beautiful arrangement in your vase.
Wonderful colour and a very nice combination.
Your garden photos look amazing, and haven't you done so well in a short time.
Lots of crafty love. Jenny L.

What a lot of changes you've made to your garden after only one year. Amazing that you could still find the pinks (dianthus)in flower. Your vase was heart-warming on the wet November afternoon - thanks!

Hello Elizabeth,
Your flowers are so pretty. : )
You have done a wonderful job with your backyard.
Have a wonderful day.
Blessings!