It's a dull day and it's decidedly nippy and yet, in the garden, the wallflowers are flowering again - isn't nature amazing :) 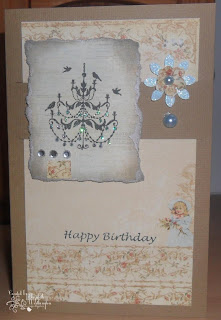 This card was made a little while ago for a friend's birthday. I spotted the original, entitled Sophisticated Birthday, and designed by Rachel Jackson, in Craft Stamper, the July 2011 issue. Needless to say, I didn't have any of the suggested materials so I substituted from my stash, using a delicately patterned paper from the Prima Romantique Collection - the colours are very subtle. Another case of the photo not doing it justice. 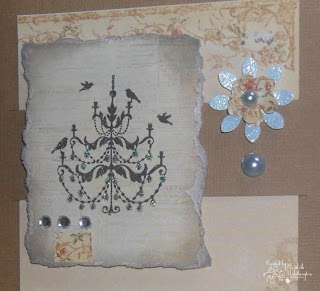 Hard to see from the photo but it involves cutting the front of the card base in two places, then slotting the design paper through the slits. I'm not sure you can see it any better but here's a close-up of the panel of card formed by the cuts. The chandelier stamp came free with the same issue of Craft Stamper ... it's stamped in black and blinged up with glitter to sparkle like a chandelier should. 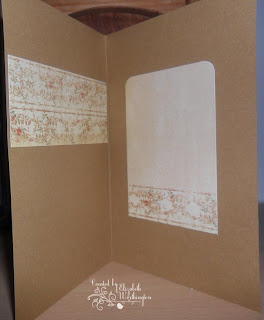 The DP I chose was single-sided so when the front was completed what showed on the inside was the boring blank reverse of the paper.  I could have stamped a greeting or a design on it I suppose, but I chose to cover it with a panel of the DP. 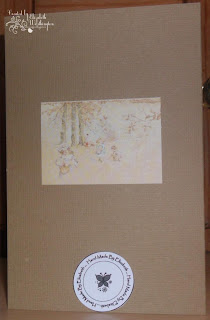 Another piece of the DP with a pretty woodland scene decorates the back.

From chandeliers and bling to reality - apart from a few minor bits of domestic trivia, my main, self-imposed, task today was to give the bathroom a good going over - everything in there is now sparkling so I can rest on my laurels for the rest of the day :)  I do have to pop down to the health clinic later for a flu injection but after that I can retreat to the craft space - bliss!

I'm hoping to return later and post some cards in the Alphabet series - just got to get the camera out.

Just a reminder before I go - don't forget to check out my giveaway to celebrate reaching the century in followers - 104 at the last count - either click on the photo on my right sidebar or click this link here. The prize is a lovely Funky Farm Scrapbook Barn kit and you never know, it might be your name that is drawn out of the hat :)

Lovely card Elizabeth - love the idea of the slits in the card. Believe it or not my snowdrops and daffodils are up about 2 inches already. Unfortunately a heavy frost will probably kill the lot.

Brilliant card, those slits are a great idea and with double sided paper it means you can see both sides :o)
Jackie xx