A slightly better day here today - it's still dull and dank but the winds have died down from gale force to a gentle breeze. But it is clear that winter has arrived so time to get out the slow cooker - there's nothing better than getting home, chilled to the bone, to be greeted by the delicious aroma of a warming and comforting stew wafting through from the kitchen. 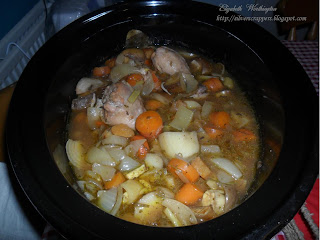 Many of you will have gathered from my posts that my DH, Alan, is a handy person to have around -he can do just about anything he turns his hand to, especially in DIY sphere. So perhaps it's no surprise for me to reveal that he's not a bad cook too - as long as it's simple! He may have been a research chemist in another life but he does not like measuring things out to the nearest nanogram :) So for no other reason than it's not an exact science, he particularly enjoys making soups and stews and the following recipe is one of our favourites. I believe it's Alan's variation on a Marco Pierre White original - yes, it was as much a surprise to me that he read the recipe, let alone tinkered with it to suit our tastes!


Alan's Chicken & Vegetable Pottage
Serves 3/4 people depending on how hungry you are.

Method Throw all the prepared ingredients into a large slow cooker.
Cook on high for one hour, then on low for 6 hours.
Serve from the slow cooker – two to three drumsticks per person.
Crusty bread goes very nicely with this dish - but then we think crusty bread goes nicely with most soups and stews :)
Alternatively, this dish can be cooked on low for 9 hours and be ready for when you get home from work or a day out. 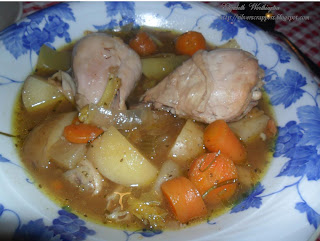 If you haven't got a slow cooker, and why should you - a lot of people don't own one - then you could stick everything into a large casserole dish and cook in a slow oven for several hours. I don't think the timing is crucial as long as the ingredients are cooked all the way through.

The weekend is almost upon us and, for once, I've no plans to take me out into the cold, yet ... no, I intend crafting away in my little room for as much of the weekend as I can get away with. Alan, of course, may have other ideas and could easily drag me out for a walk along the promenade - nothing like a good bracing walk to put some colour in your cheeks, he'll say! I have the patience of a saint :)

I hope you all have a fabulous weekend, whatever the weather and whatever you do.

In the meantime, take care and happy crafting,

That looks yummy.
Anyway thank you very much for the Ribbon rings links prices are good.

Oooer, I'll have to try this one Elizabeth! It looks scrummy and ideal for the slow cooker which I don't use as much as I should! Thanks! Di xx

Mmmmmmmmmmmmmmmmmmmmmmm I can smell it now. Foodwise, winter is my favourite time because it means stew and dumplings, meat and potato pie, my all time favourites. My slow cooker gets well used this time of the year :o)
Jackie xx

I too could not do without my slow cooker. At the minute I have a roast in mine. Trying to clear out the freezer before the Christmas food goes in. The chicken and vegetable stew looks really good - just what you need in this weather.

Di again! Are the drumsticks skinned before cooking them Elizabeth? Am going to try this one out during the week - love the idea of popping everything in and just letting it do its thing :)) Di xx