What's On Your Workdesk Wednesday - Week 481

Sadly, I wasn't feeling too perky last week so missed my weekly fix of WOYWW. Not feeling much better today - had an asthma attack during the night and now feeling the aftermath - but I'm determined not to miss the vicarious pleasure of snooping round all your crafty desks. And for what it's worth here's mine as it is this morning. 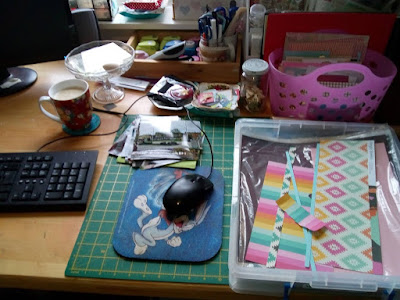 Not much going on and apologies for the glare at the back. It's a dreich day, all cloud, drizzle and no sun, but the light's still reflecting of the stamp blocks in the glass dish and that pile of photos that have just arrived from FreePrints. I'm in the process of deleting the pics from my phone now that they've been transferred over to this computer. There's the usual box full of paper at the front there - all that changes are the contents as I work my way through it making pages. There's a couple of dishes full of embellishments and a jar of wood veneer at the back. Beyond that are a couple of items and I thought I'd share a couple of close-ups with you this week. 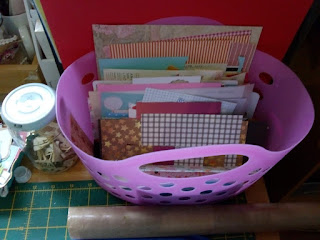 This pink basket contains all my off-cuts of paper - it's there because I'm trying to ensure the pile does not get out of proportion. I don't want to end up with yet another snippet mountain. In front is my rather scruffy heatproof mat - it's there because, well, because I haven't put it away after using it the other day. 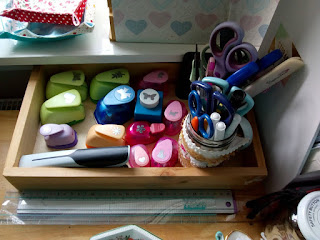 And right at the back, behind a pile of rulers, is the tool tray. On it are two jars containing scissors, bone folders, an emery board, tweezers and my newest toys the embossing pens. That's besides my collection of tiny punches and the Tim Holtz tiny attacher - all useful for adding embellishment to a page.

And finally, the one book I've been listening to recently. Only one because I started a book I didn't like and so won't be finishing. 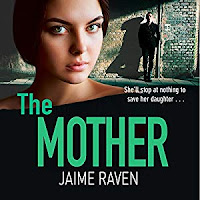 This book, The Mother by Jaime Raven, is a compelling listen. It's a gripping thriller and I couldn't put it down, so to speak. The main protagonist, Sarah, is both a detective and a single mother whose daughter is abducted 'as punishment' for what she did. Only Sarah doesn't know what she did that deserved the kidnapping of her child. What follows is the desperate hunt for her daughter. Truly edge of the seat stuff.


For the record, the one I gave up on: 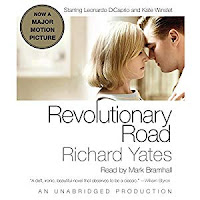 I know, it's been hailed as a masterpiece of 'realistic fiction' but I really couldn't feel any empathy for the main character, Frank. I imagine he's the character played by Leonardo DiCaprio in the film. I might go back and try again some time ... just not right now.

So that's me for this week. I'm looking forward to seeing what's on your desk this week.

In the meantime, have a great WOYWW and a fabulously crafty week ahead.

Thanks for sharing your desk top, Elizabeth. I do hope you are feeling much better soon. That book sounds good, I must look out for it in my local library. Have a happy day, Jo x #22

Hope you are fully recovered from your asthma attack soon Ellie. Thanks for the birthday wishes. I can't wait for the crop, not sure what I'm bringing to not do anything with yet lol. Happy WOYWW. Sarah #21

Revolutionary Road is a great film - I've not read the book.
Happy WOYWW :)
Claire no. 1

It’s good to see you back joining in the Wednesday fun Ellie. I hope you’re feeling much better very soon. ....can’t have you missing the crop my friend.
Hugs,
Annie x

Hi Elizabeth, I totally get what you say about the book. If I can't feel empathy for the characters, I can't sustain any interest in the story either. Lovely tidy storage on your desk. I'm off to look at the other post now. Have a lovely week, Hugs, Shaz #4 X

Hope you are feeling better soon. Your desk is very colourful and bright must be nice to work at.

Hope you feel better soon...your basket of papers is really inviting and neat. Thanks for sharing. Caro x (#19)

sorry you've been under the weather but glad you're a bit better (asthma aside!) I hate having to give up on books, but sometimes it has to be done! Helen #2

Frayed Round The Edges said...

I really need to organise myself and listen to books when I am working.Karen 9

Hi Elizabeth, so sorry you haven't been feeling well. I hope you feel better soon. Good idea to keep the scraps to a minimum, I have a little basket for the same reason. Have a lovely week Heather x #10

Sorry to see you've not been well Elizabeth. Pretty papers, I fight a constant battle with all the bits :-) Take care Anne x #7

Lovely lot of gorgeous papers there. Hope you feel better soon. Thanks for sharing. Hope you have a good week. Hazel, WOYWW #20 x

Hi Elizabeth, sorry to hear you've not been feeling too good and hope it doesn't last too long. You just take it easy. Have a great week and happy woyww, Angela x15x

I hope you start to feel better soon. I’m sure your asthma flairs in the hotter months or at least my son’s does. Take care. Your photos of your desk are great and that Mother “book” sounds good. Dorlene #30

Love psychological thrillers so might have to investigate this one - sounds good!
Thanks for the peek around your desk and sorry you have not been well. nasty when you have an asthma attack but even worse somehow when it is in the night. Takes a while to get over it. Just rest, please.
Hugs, Neet xx 14

Oh Elizabeth, sorry you're not feeling 100%, an asthma attack on top of feeling a bit grotty for a week is just not fair. I hope you have plans that include a whole lot of sitting about gal! I have recently separated my scrapbook paper offcuts from the plain card scraps and it works better to focus me, I must say. I'm just working out if I can fit a lovely glass dish on my desk to house something or other, I love the look of yours!

Hope you are feeling better Elizabeth. We are all looking forward to meeting up next month - I am just deciding what to bring along. Might just be a box of brownies!!! xx

I empathize with you regarding your asthma attack, having had a few myself. Your desk looks nice and ready for when you are up to crafting again! I chuckled a bit at the roll of heat proof mat - I have a large one that I taped to my table - always out -always in use-and getting grungier by the second! I love it! (you can see it in the background of my ATCoin pics!) Thanks for sharing, have a great week! Lindart #27