In A Vase On Monday - Spring Stars 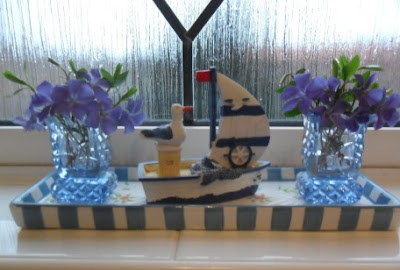 Wandering around the garden and pondering what to bring in for this week's In A Vase On Monday the very pretty periwinkle blue flowers of vinca minor kept catching my eye. They are the tiny stars of the border in Spring. They are also wonderful survivors. They have managed to spring to life again after my husband's very, very determined attempts to rid the garden of the plant which, it has to be admitted, can be invasive. 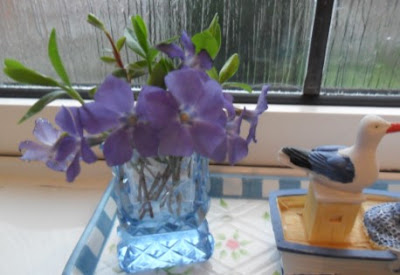 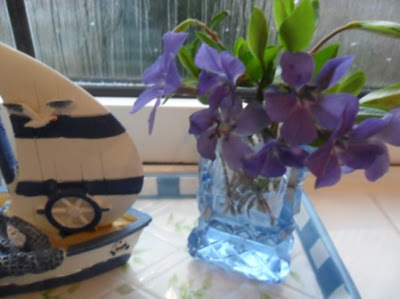 Susannah Seton, in her book Every Garden Is a Story describes how delighted she was to discover in the 14th Century tale of chivalry Sir Gawain and the Green Knight, that periwinkles were embroidered on to Sir Gawain's cape before he set of on his heroic journey to conquer the Green Knight. And also that it was commonly made into wreaths to placed on the heads of young men going into battle in medieval England. Hard to dismiss a flower, however tiny and seemingly insignificant, when it has such a history.

Because of their tiny size I needed something small to arrange them in and this pair of vases, bought at a jumble sale more than twenty years ago, were the perfect choice. I was informed by the lady who sold them to me that they are 'snowdrop' vases but I somehow don't think so - they really are very small. I've put them on the bathroom window sill - the only room in the house that has any blue in it. Makes a change for them to do the job they were intended for, to hold flowers - rather boringly they usually serves as holders for our TePe toothbrushes!

Email ThisBlogThis!Share to TwitterShare to FacebookShare to Pinterest
Labels: in a vase, periwinkles, vinca minor

The contrast of flower and foliage on these is always lovely, even though they can be a little invasive - I used some in Younger Daughter's wedding posy, foraged from my fitness centre's car park! The tiny vases are intriguing and a pretty colour too - nice to have a pair of them. ps I have sent you an email about the ferns I promised

I like the periwinkles even though they do spread, they make a welcome splash of coloour and I often use the wandering leaves in vases too. What fascinating stories about them.

I love the vinca vines. Maybe I'll be able to plant some in my new yard!

PS The vases are perfect for the flowers!