Thought I'd post these cards while I'm waiting for the storm to really hit town. It's already gye (Scots for very but more so) windy but that, apparently, is just a taster of what is to follow later today. Anyway, just in case I have to shut down here's a very quick share of some cards I made recently for the January UKPC swap - the theme for which was 'snow'. 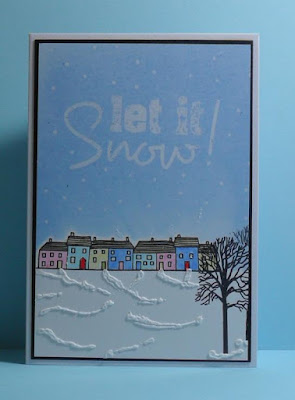 If you think this design is familiar, and those of you who have been following me for eons may well do, it is because I made one almost identical to one I made back in November 2011 ... and for details of supplies and how it was made here's the link.

I had to familiarise myself with my brayer again ... I don't think I have had it out in months, or longer. My hands are not what they used to be and I struggle with my grip so I didn't make as good a job this time but I'm not ready to throw in the towel just yet. I did make a few practice pieces though and here's another two cards made with the rescued pieces. 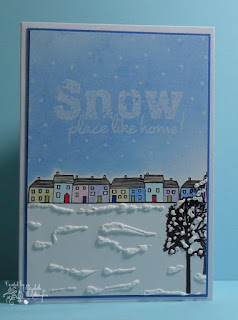 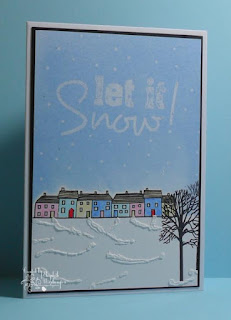 This last one is matted on to a snippet of blue cardstock so I shall be submitting it to Pixie's Snippets Playground - Week 214.

I'm also submitting the first card to CHNC Challenge - 266: where the theme this week is 'anything goes as long as it's Christmas' and CHNC Challenge Extra for February 2016

I should add that there is just two little differences in the supplies used this time around. Instead of using Archival ink to stamp the row of houses, and therefore having to colour them in with AquaMarkers, I used Memento Tuxedo Black ink and a selection of ProMarkers to colour the houses.

If you caught my Rudolph Day Countdown To Christmas card you would have noticed that I reflected that it would have looked better if I had rounded the corners on the card blank to match the PL Topper, as I did with the patterned papers. Well, Kath, of Plain  & Simple, suggested I quite simply pull a couple of star gems off and round the corners, so I did. And I was right, it looks much better with all the corners rounded. 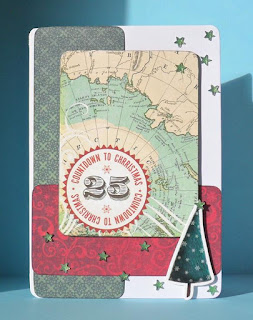 And just in case you are wondering, that is a bit of winter sunshine you see in the photo. When I took the photo this morning it was raining, howling a gale and the sun was sunshine ... only in Scotland!!!

Apologies to those of you who look forward to the In A Vase On Monday ... it's much too wild out in the garden to go flower picking, always supposing there's any blooms to pick!

Well, that's me done rambling for now ... I'm off to fit in a bit of bloghopping now before having to take The Boss for her monthly visit to the vet. She's overdue her injections and so a bit poorly today but tomorrow she will be as sprightly as a kitten again ... well almost :)

Afternoon Elizabeth. I do hope you're not too battered tonight.

Your card is lovely. I wish I was able to achieve with my brayer what you have with your second two. I also have a bit of a hand problem but I think I'm probably just too heavy handed sometimes.

Kath came up with a super idea. The stars do work really well. Isn't it great that we are able to share ideas with each other. I do hope you will join in with my blog candy give away. Barbxx

Lovely backgrounds Elizabeth, fantastic work with the brayer. Love the cottages and snowy trees in the foreground.

Hello Elizabeth, beautiful cards, the snowy scene one is beautiful, but realy I love them both, Kate x

LOVE these snow scenes Elizabeth! Perfect Christmas cards. And also a great save suggested by Kath on your other card!

Lovely brayered snow cards Elizabeth. Hope the storm passed you by without damage and the Boss is feeling better now.