This has got to be the quickest post for Annie's Friday Smile ever because I'm in the middle of sorting out squares for a patchwork quilt and I've laid them out on the bed. If I don't move them soon there will be no bed for me tonight!

Anyway, here's a photo that made me smile today. 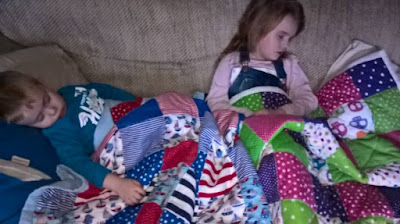 Two of my great-grandchildren, Brodie and Rhian, snuggled up and snoozing under the lovely patchwork quilts their gran made for them for Christmas. There's nothing quite as adorable as little ones sleeping :)

And here's my joke for the week:

A man moves into a tiny village, walks into the pub and promptly orders three beers.

The bartender raises his eyebrows, but serves the man three beers, which he drinks quietly at a table, alone. An hour later, the man has finished the three beers and orders three more.

The next evening the man again orders and drinks three beers at a time, several times. Soon the entire town is whispering about the Man Who Orders Three Beers.

Finally, a week later, the bartender broaches the subject on behalf of the town. "I don't mean to pry, but folks around here are wondering why you always order three beers." "'Its odd, isn't it?" the man replies. "You see, I have two brothers, and one went to America, and the other to Australia. We promised each other that we would always order an extra two beers whenever we drank as a way of keeping up the family bond."

The bartender and the whole town was pleased with this answer, and soon the Man Who Orders Three Beers became a local celebrity and source of pride to the vilage, even to the extent that out-of-towners would come to watch him drink.

Word flies around town. Prayers are offered for the soul of one of the brothers. The next day, the bartender says to the man, "Folks around here, me first of all, want to offer condolences to you for the death of your brother. You know -- the two beers and all..."

The man ponders this for a moment, then replies, "You'll be happy to hear that my two brothers are alive and well. It's just that I, myself, have decided to give up drinking for Lent."

Hope you enjoyed that one :)

Have a wonderful weekend everyone!

You girls are cracking me up with all the jokes today. I need a lie down myself now
Have a great weekend
Lynn xx

Love the story Elizabeth, very funny! But love the photo of those two even better and that is very true, I bet it's peaceful when they are asleep Lol! Have a great weekend, Angela x

The photo of the littlies under the quilt is lovely Elizabeth. Your Friday Funny is great. I didn't see that coming. Have a lovely weekend. Barbxx

I have just seen this photo on Facebook, probably because I am 'friends' with Annie. It is lovely to see them so relaxed with their quilts.
The funny made me smile too. have a good week. Kate x

Oh yes, sleeping children is a lovely sight.
Did you make those patchwork quilts they are sleeping under? Very nice indeed.
Oh I laughed at the joke. I certainly did not see that coming.
Have a good week,
Lisca

What a gorgeous pictures of the kids Elizabeth. There is much to be said for cosying up under a warm rug at the moment.
Good joke too :)

Hi Elizabeth...this is hilarious - would suit my hubby, any excuse for a beer. Lovely quilts and restful littlies, snuggled up - makes me smile too. Have a fab weekend Robyn

What a hoot... great joke. Thanks for the chuckle!
The children look so lovely and the quilts are too! Everyone made with love 2 quilts and two lovelies1
Jo x