A Saturday Saunter Down A Country Lane

I'm still experiencing problems with my camera and yet to sort it out. Thought I'd try my DH's Olympus but having just as much trouble with that. It would seem I need a CD Rom to enable me to download pics to my PC and, as it was bought secondhand, we don't have it. So, just to prove I haven't given up altogether, I'm posting some photos taken during a saunter we took a couple of Saturdays ago, before cameragate!!! It's a short walk that takes us by several footpaths and streets down to the lane that goes through the nearby golf course. 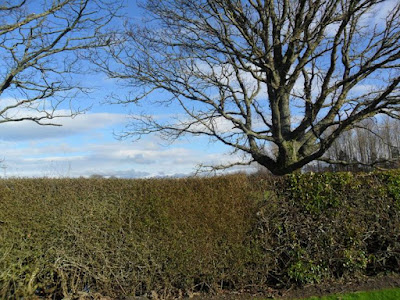 It was, as you can see, a bright and beautiful day. This is the boundary hedge to the golf course. It was a chilly but dry day and the sky was mostly a clear blue with just a few 'white fluffy clouds in a cluster hanging on a breeze to dry' (lyrics from an old Max Bygraves song - can be heard here). 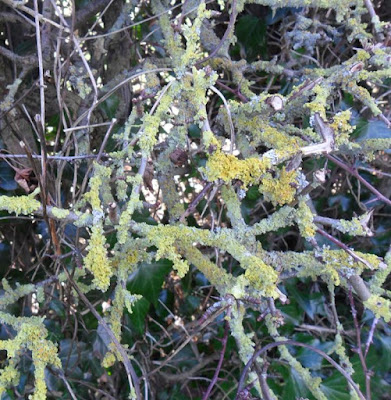 Lichen growing in the hedge. I believe that they are an indicator of clean air but this growth is only a few yards from the A77, the main arterial road from Glasgow to Stranraer - a very busy road causing, you'd think, a great deal of pollution. Not so here. The only other fact I know about lichens are that they are used in the making of natural dyes. A quick search online shows that the colours can not only be the shades of yellows and browns, as might be expected given the colours we see growing, but also very pretty shades of pink and lilac. If you fancy having a go at dyeing with lichens there's more information over at Jenny Dean's Wild Colour and It's A Stitch Up websites. 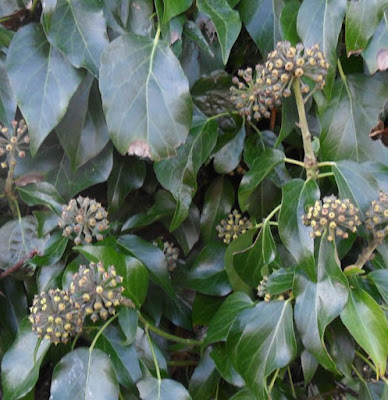 Ivy in flower. Apparently this is good for the bees and gardeners are now being urged not to rip up ivy when tidying their gardens. Honey bees rely on ivy for the majority of the pollen and nectar they collect during the autumn months, a crucial time when the insects are trying to build up stores for the winter and feed their young. Now, I like ivy for the way it clads a fence, climbs up trees, and provides some much needed foliage in a winter vase when there's little greenery about but DH considers it nothing but a pest to be controlled at all costs. I think I have a major hill to climb to persuade him otherwise! 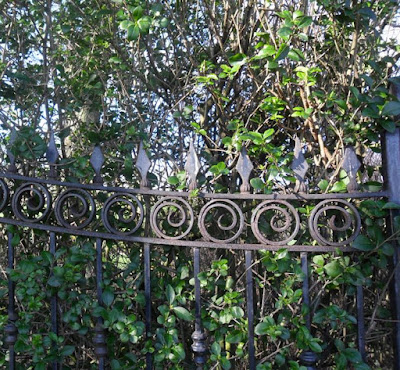 There's a big old house down the lane which has a pair of ornamental iron gates, at the end of the driveway, with some very nice detailed work on them. 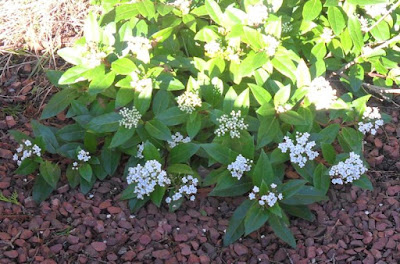 A pretty shrub flowering away in February. I'm not sure what this one is called, possibly a viburnum tinus, but at a time when there's not many flowers in the garden spotting it blooming away was such a treat. 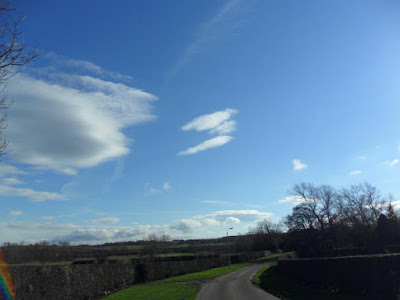 That sky again! This photo was taken at the top of the lane. We live under the flight path from the airport at Prestwick so it's unusual to look up and not see a plane overhead. It was no different on this day - seconds after this photo was taken one flew over, no doubt full of folk escaping the cold of our Scottish winter for warmer climes.

Hope you enjoyed this wee stroll down our nearest country lane.

Taking the advice of a fellow blogger, I have on order a new memory disk for my camera. I'm hoping that will provide an end to my camera problems and I will soon be back posting my crafty makes. Until it arrives I'll try to find other, previously photographed but not posted, items that might be of interest.

Many thanks for popping by. If you leave a comment, all the better.

Hi Elizabeth, a lovely selection of photos. It looks very pretty in your locality. I hope you get your camera business sorted soon. Barbxx