Today's share is the appliqued tote bag you may have spotted in this week's WOYWW post. It's taken me some time but it's finally finished and ready to sent to my wee sister ... she doesn't read my blog so no worries about spoiling the surprise :) 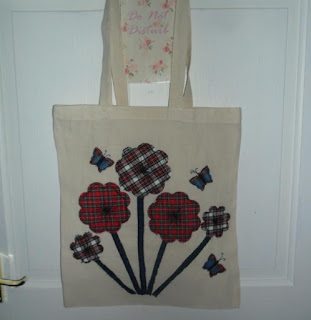 This was my first serious attempt at free motion embroidery. Not easy! My hands got so sore and cramped up that I had to sew in short bursts. I believe that wearing special quilters' gloves would take some of the strain so I plan to acquire a pair before I try this method of sewing again. And there's no possibility of me trying it on something as large as a quilt - ever!

The plain calico tote bag was purchased in a pack of ten from Amazon. The cost worked out at about 66p each ... that's approximately 96 cents in US currency at the time of writing. Before attaching the applique, I unpicked the side seams to make it easier for sewing.

The flower and butterfly shapes were first cut out of Bondaweb, an iron-on transfer adhesive, using Dies from X-Cut's Bloom and Butterflies sets and my Cuttlebug die-cutting machine. The Bondaweb needs to be passed through the machine several times to persuade the dies to cut it and even then I still had to snip stubborn areas with scissors to release the shapes. However, this method is still quicker than the alternative which is to trace around the shapes and then cut them all by hand.

The next step which is to iron the shapes on to the reverse of the fabric. The tartan fabric used is from a pack of fat quarters bought from Create and Craft. There was no easy way to cut the fabric shapes out - it all had to be done by hand, cutting around the ironed on shapes. That done, the shapes were arranged on the front of the bag and then ironed in place. I also cut some strips of dark green tartan for the 'stems' and fixed them in place with Stick and Spray for Fabric.

Next came the 'fun' part - the free-motion sewing. Fortunately, it doesn't have to be precise and the result doesn't bear too close inspection, but in the interest of honesty here's a close-up. The final step was to sew up the sides of the bag and press. Job done!

Things I learnt from the project apart from the fact that I might benefit from those quilters' gloves. Well, use good quality thread. Because this was very much a practice piece, I used cheap, thin, old black thread. Not a good idea. It snapped several times making the experience more frustrating than it needed to be. Oh, and be careful when giving butterflies antennae ... it's so easy to get them wrong!

Otherwise, the bag didn't turn out too bad. Now that the law requires large shops/supermarkets in England to charge 5p (about 7 cents)  for all plastic carrier bags I thought my sister, who lives in London, could do with a tote to pop in her bag for when she is shopping. I think the tartan will remind her of home.

We had our 16 year old grandson over yesterday to help us lift the carpet from the hall and landing ready for when new flooring is fitted next week. Needless to say, he made very short work of it ...oh, to be that young and fit again!

It's amazing what you find hiding in an old house ... this one is over over 60 years old. There was cheap laminate under the hall carpet and that had to come up too. Under that is beautifully polished floor boards. Upstairs on the landing it's not quite so beautiful. There's a strip of bare floor boards up the centre where, presumably, a carpet runner had been laid, and the edges have been painted red, then white, at some point in the past. Still, I rather like those polished floor boards in the hall. So much so, I'm thinking it might be a shame to cover them up again ... decisions, decisions!

It's a really nasty day here. I've come to the conclusion that one thing the west of Scotland does well is ... rain. We've only had one sunny days in weeks and I hear there's another storm on it's way. I'm feeling miserable! To cheer me up the EM is taking me out to the garden centre this afternoon. There we will treat ourselves to a delicious scone and a really good cup of coffee.

Hope you have a lovely afternoon too.

I did comment on WOYWW Elizabeth. I'm so glad to see it finished. Your sister will love her beautiful new bag. Barbxx

Oh wow Elizabeth this is absolutely beautiful your so talented xx

It was so nice to read your comment and so pleased you left it because I then realised it was ages since I visited you. And a quick visit told me that I must be one of Bloggers recent casualties as I don't appear on your follower list. I know we were told only non Google ID followers would be removed but it's gone far deeper than that as lots of Peeps have confirmed.

So back there now and hope Blogger doesn't meddle again. A lovely bag and great to see some stitching, all too long since my machine saw the light of day.

And yes, the youngsters can be very useful with their agility.

What a very cute tote! I'm sure your sister will love it. Our area is slowly getting rid of using plastic. Santa Fe doesn't allow them at all. Most places charge up to $1.00 US for a paper bag! Luckily I have a wonderful tote that I bought from Lunch Lady Jan years ago and also some others that I've purchased.

Hullo Elizabeth, well this is one really amazing tartan bag...