I hope this finds you well. I managed to make the card with the supplies I had lying out on my desk on Wednesday. I could/should have posted it earlier but it's been such a busy week, in the garden and out and about, and I have had very little time to spend here in my craft room, sigh. Still, today I have all day to potter in here so that's good :) 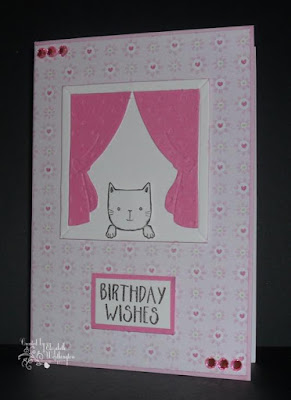 Nothing difficult about this card. All the detail is created using the cute embossing folder and stamp set, Furry Friends, which came free with a magazine (Simply Cards & Papercraft).

- the front edges were inked using a Rose Pink ProMarker, and a ruler - with my hands I wouldn't trust myself to do it freehand!

- a sheet of pretty pink heart patterned paper, from LOTV Nitwit Collections Bonnets & Bowties paper pack, was trimmed, to fit the front leaving the pink edge showing, and adhered to the card.

- snippets of white and pink cardstock and the embossing folder were used to create the window and curtains. As all I wanted to emboss was the 'window' and 'curtain' I chose snippets that were not the full size of the folder but just big enough to cover the 'window' part. First the white card was passed through the embossing machine (my trusty Cuttlebug) and then the pink. Then I cut out the complete 'window' from the white card but only the 'curtains' from the pink card - these were then glued to the inside of the 'window frame'.

- another snippet of white card was used to stamp both the kitten and the greeting using a Memento Tuxedo Black ink pad. I then carefully trimmed round the kitten so that it could be fixed, using dimensional sticky pads, to the inside of the 'window', making sure that it's wee paws were 'clinging' to the 'windowsill'.

- a leftover scrap of the pink cardstock was used to mat the greeting after it was trimmed to size. It was then fixed to the front using sticky pads.

- pink gems were used as a final embellishing touch.

I'm submitting this card to the following challenges:

Pixie's Snippets Playground - Week 216 - It's a wee while since I popped over to the playground only to find that our Head Snippeteer, Di, isn't so good at the moment. Let's hope she makes a speedy recovery and is back in charge again soon. In the meantime, Sarn is doing a sterling job of keeping the playmates under control :)

Cuttlebug Mania - I {Heart} You - project to include a heart. Not immediately apparent, but the 'curtain tiebacks' are embossed hearts.

I think this card will be perfect for one of my girly great-grands.

Now, I'd like to wish you all a very happy day.

I'm so pleased to see your finished card Elizabeth. It is so cute and I enjoyed reading how you went about making it. I also have this free set but not used it yet. Barbxx

Hi Elizabeth . . . well, I don't know about doing a sterling job . . . but it's been fun in the Playground this week . . . not too many hijinks . . . but that might be because I've been stuck in the Admin Block's cubbyhole doing paperwork! Intending to pop over to the Treehouse for some of Brenda's Prosecco later . . . fancy joining me?

Your cute cat card is so purr-fect! Thanks for coming over to the SNIPPETS PLAYGROUND with it.

Hi Elizabeth - so good to see you in the Playground and also Cuttlebug Mania as well! Sarn is doing a fabulous job and giving me some much needed rest - but I hopped over with my CB Mania hat on anyhow :) Love this card - clever use of the embossed hearts on the curtains (and of course in the background paper). Lovely and really sweet card there, love the kitty!! I bet Bonnie approves :)

It's a very sweet card Elizabeth and as Di said, clever use of the embossing.

So they think things have been quiet in the Playgroud do they, if only they knew !

so gorgeous elizabeth.i love the cute kitty peeking out of the window ;D

Pretty, but I am not sure how it fits our Rudolph Day challenge where the theme is Christmas. You also have not mentioned us in your listed challenges so I am wondering if you put it accidentally or what happened...

I have found your blogs to be friendly and welcoming. Thanks for making this one. I really enjoy reading and surfing it. Try to visit my site @ www.imarksweb.org