I hope you've had a happy week with lots to smile about and share with Annie at A Stitch In Time. I've had plenty of reasons to smile despite being a wee bit under the weather. 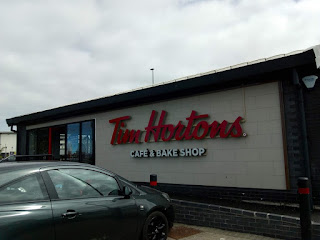 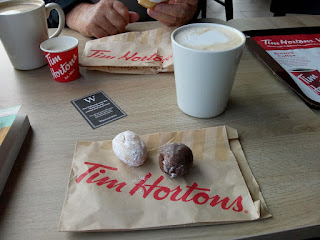 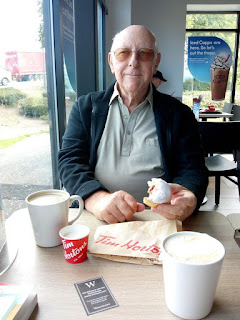 It's a Canadian import. Lovely staff, great big mugs instead of paper cups and these tiny doughnuts, called Timbits, that are morsels of yumminess. Himself opted for a traditional sized doughnut, of course! 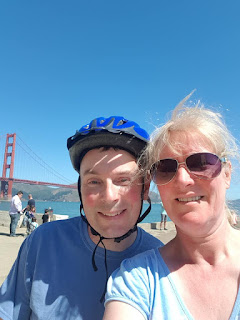 My son, Alun, and his partner, Elaine, have been touring the States over the last couple of weeks and here they are, having cycled over the San Francisco bridge, taking a selfie with it in the background. 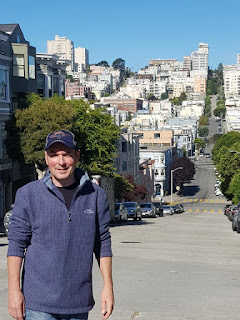 Here he is again with that famous street in the background. I'm not sure what it's called but it's featured in many a car chase in various movies and TV series.

They are clearly enjoying their trip which has taken them to Las Vegas, San Francisco and now New York ... the trip of a lifetime!

I can't go without sharing this lily which has just come into bloom. 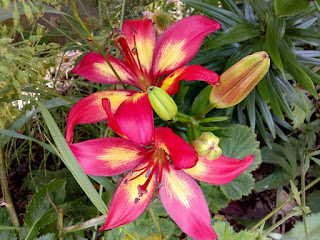 That's it for this week folks. Hope you will join Annie with your smiles. As she says, 'There's more than enough bad news in the world so lets do our little bit of spreading some happiness between us.'

Have a great weekend and keep smiling.

Looks your son and partner are having a great time. Your lily is stunning....such gorgeous colours. Hope you’re feeling much better very soon.
Hugs,
Annie x

Oh I remember Tim Hortons from our Canada trips. Its the only place where you can get a decent cup of tea (or steeped tea as they call it).
Well Alun and co are enjoying themselves. I can imagine that those photos make you smile from ear to ear.
For me its that lily. What a stunner! Thank you for sharing that.
By the way, how is you arm? Has the swelling gone done a bit?
Have a great weekend,
Hugs,
Lisca

Looks like a great coffee shop & your lilly is a stunner, Elizabeth! Glad your son & his partner are having a good trip here in the US--great pictures!