It's not just WOYWW but also St Valentine's Day and my desk looked just a bit different this morning. On it was quite a surprise!!! 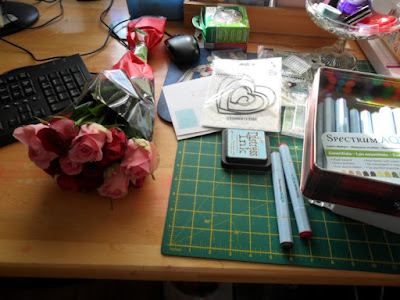 Roses! Not usual for a Wednesday morning. The roses were totally unexpected but aren't they lovely. I especially like that it is a mix of pink and red - so pretty. The hearts, as you can probably guess, were left out after making a Valentine's card as was the box of Spectrum Aquas. There's also a ton of stamps - most featuring hearts too - an ink pad and the scraps of card used as testers. Mr Romantic now has the card so I can share it here too. 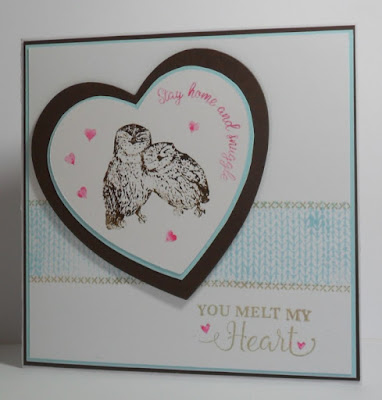 I've steered away from traditional colours this year, though there is a touch of red - hearts just have to be red!

Right, that's it for me this week. Short and sweet. I'm going to take Mr Romantic out to our favourite coffee haunt for a treat. Well, after those roses, I think he deserves it,

Happy WOYWW and have a wonderful Valentine's Day whatever you're doing.

Edit Note: Readers, he declined my invitation. He says it's blowing a gale out there and freezing cold so he's opted to 'stay home and snuggle' just as it says on his card!

Lovely. lovely roses! And such a sweet card :)
Happy WOYWW!
no. 3

Happy WOYWW. A lovely card - and those roses are gorgeous. I don't blame Mr Romantic for wanting to stay in. Sadly my gorgeous hubby is outside for most of the day - getting cold and soaking wet whilst sorting out the cows/calves/other jobs on the farm. At this time of year he is out from 6 am through to the following 1 am (with a few short breaks for food/shower/naps). We are both looking forward to when we no longer have the farm business, and can relax in Spain. Ali x #30

What beautiful roses Ellie...such a romantic. Love the card you made....I made one too but didn’t take a pic (it’s not as posh as yours of course but it made him smile). Enjoy snuggling up in the warm and cosy both.
Hugs,
Annie x #18

I can't say I blame him Elizabeth; it's far too cold and miserable to go out. Love the card and the flowers are beautiful. Have a great week. Sarah #14

I think staying home and snuggling would have been much the best thing to do today, given the awful weather (again!) love the card, and the flowers are gorgeous. Have a great week.. Helen #1

My name is Cindy said...

Hellooooo there Elizabeth - your the third UKPCer I've seen this week (good to know you haven't moved as well). That was all my fault as I was asking BJ about Chris. That card is so sweet, love those snuggly owls. Happy Wednesday, Cindy #22

Very romantic. He probably prefers to snuggle up at home.
Monica #34

Hello Elizabeth, already admired your lovely card over on UKPC, the roses are gorgeous. We too stayed in!!! Anne x ,#21

great looking desk. I love the card and those roses are gorgeous. My valentine and I have been together 43 years now. Good times. Have a great week. Vickie #39

Flowers! Gorgeous. Loving your card too. Have a lovely belated WOYWW, Angela x20x

Hi Elizabeth. What an old romanticyour hubby is - good for him!! Those roses are lovely - as is his card. Can't say I blame him for staying in and snuggling. Yesterday was bitterly cold.
Take care. God bless.
Margaret #4

Oh I love a man who turns out to be a cheap date! Gorgeous roses, how lovely a surprise for you. I did wonder if perhaps the dies were there because he had done a runpelstiltkin overnight and made a card himself!