What's On Your Workdesk Wednesday - Week 453

Another Wednesday and another WOYWW. 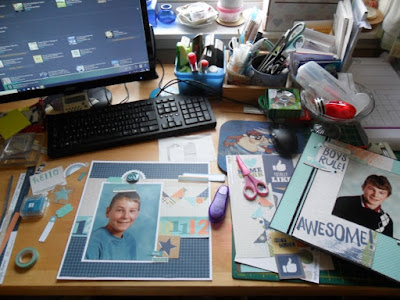 I've been putting together a couple of scrapbook pages. A while ago, during an uncharacteristic period of forward planning following the method used by Nicole Jones 911, I put together several 'scrapbook kits' from my stash. Nicole has several YouTube demos on how she makes her kits, all of which I found very helpful. When I felt like scrapbooking yesterday I just pulled out a couple of the kits and had one layout completed in no time at all and another begun.

Other stuff I've been up to this week. 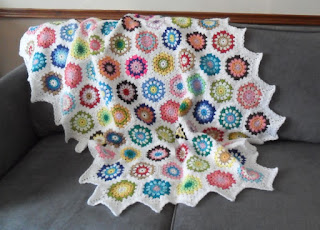 Finally finished this hexagon throw. It took me ages to weave in the 'hundreds' of yarn ends. That's the sort of task has you vowing never again! More yarn found it's way into my knitting bag. I've already started knitting with the green yarn, centre photo, to make up this retro jacket pattern. 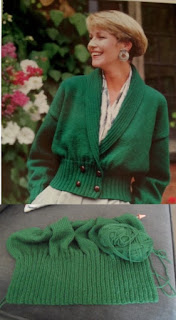 The EM is doing okay. He had a pre-op examination yesterday but was disappointed to be told that he will need to get another heart scan before the operation goes ahead. He's impatient to get it over and done with so another delay was a bit of a blow. He's at the hospital again tomorrow to have a heart monitor fitted for 24 hours. I can't say, though, that he's letting his dicky heart slow him down all that much - he's not the kind to sit around watching TV all day! 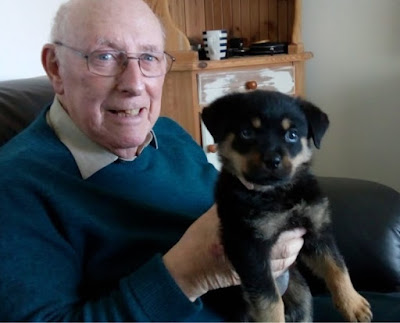 Here he is getting to know Ebony, our daughter's Rottweiler puppy. She's cute and he's not half bad either.

Just visible in my desk photo this week is the 'library' of audio books on my computer. I have set it up to be able to listen here in the craftroom or on my mobile phone when elsewhere - perfect for hanging about hospital waiting rooms. This week's audio books have been a real mixed lot. 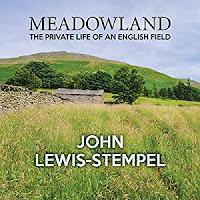 This is a lovely book to listen to. The writer records a year in the life of a Hertfordshire meadow. He describes the animals and wild flowers that live and grow in the meadow. 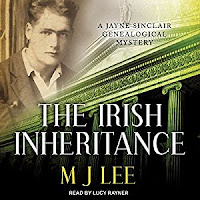 Subtitled a Jayne Sinclair Genealogical Mystery. Brilliant if you are interested in genealogy and history. I now know a lot more about the Irish Civil War and, in particular, the 1916 Revolt in Dublin. A great listen, especially if you like your family history combined with mystery.. 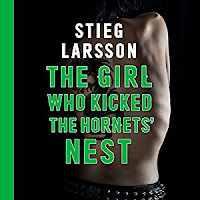 I'm such a fan of Scandinavian crime novels and, in particular,  those written by the Swedish Stieg Larsson. Too sad that he died before he could write more than three books about 'the girl' Lisbeth Salander.  I'm only part way through this one but so far it has not disappointed.

That's all from me today. I'm off to make a cuppa and a bit of lunch before settling down to check out what's on everyone's desks this week.

Have a lovely WOYWW and a wonderful week ahead.

It’s really lovely to see all the gorgeous crafting you’ve been up to this week Ellie. It’s also really good to see your hubby making a good recovery. Let’s hope they get the tests done and he can have that surgery very soon.
Hugs,
Annie x #16

Seeing your photos wants me to crochet or knit again - I was actually looking for some green yarn the other day when I was in town. I've been told 'green suits you' and when I put on my green coat I must admit it is true, so a green sweater will be in the make soon. I'm a big reader but i prefer the 'real book', feeling the paper in my hand - however lately my hub and I are (binge)watching scandinavian crime series and most of them are from Scandinavian books/writers (yes, I saw the 'Lisbeth' movies) which makes me wanna READ some of those books. Happy woyww, warm hug from Holland. Marit #26

Firstly and most importantly, I'm so glad to see the EM looking as well as he is! I know he must have been frustrated by the delay but I guess they need all the accurate info possible. Being unable to sit down is something that helped G recuperate so well after his big op too! The puppy is sooo sweet, you can't believe she's going to be a big strong dog some day.
Your hexy blanket is gorgeous, it really is, I love the colours - but the sewing in of ends is the reason I only do striped crochet blankets now, lol!
Hugs LLJ 15 xxx

Hi Elizabeth that throw was definitely worth all the sewing in of ends!. Best wishes to the EM for his impending op. Hope there are no further hold ups. Have a good week. Sarah #23

Hi Elizabeth,
ooh I bet that sweet puppy is keeping him on his toes :) and I love the afghan and WOW on that sweater. I am always so impressed with that and mostly just collect yarn fibers rather than making things out of them haha.
~Stacy #35

Those little ends were always hubby's job when I was making afghans many years ago! That green sweater is very cute - reminds me of Princess Di for some reason! I hope all goes well with EM, thanks for your visit!(I did feel very blessed to have seen the fox!) Lindart #38

great knitting and well done with the throw - that is always the worst bit of a project like that, sewing in all the ends! Have a good week Helen #3

oops, all the best for the EM with his op.

Hello Elizabeth. Lovely page you have scrapped there. The throw is beautiful. I have some squares (simple in comparison)to put together - finished ages ago - ends all done but I need to join together. est wishes to your husband , hope he soon gets sorted. The puppy is very cute. I've read all the books - as you say such a shame that there are no more. Anne x #20

Nice to see the Em smiling away - good luck with the heart monitor and eventually the echo. Funny thong is I had an appointment for next week waiting for me for another echo - not a clue why, a bubble test yes, but an echo?
Lovely to hear about how you achieved your lovely scrapbooking technique.
Hugs, Neet 1 xx (been asleep all day)

Hi Eliizabeth, looks like you're planning to be very busy, love the cardi. The puppy is so sweet but think she will grow up to be a big girl! A friend of mine had one and she was lovely but she would forget how big she was and try and sit on your knee or put her paws on your shoulder and at my 5ft nothing I had to be careful she didn't knock me over. Have a great woyww, Angela x17x

How do you listen to audio books on your phone Elizabeth... that has me puzzled. My friend left me some but yet to listen I don’t seem to sit still long enough. Think I need to make an effort.
Praying all goes well for EM op and pre-op visits too. My friend was waiting for a pacemaker, then she was admitted with issues and had it the next day instead of two weeks later ie today. She’s really well now. Not sure what EM has but pryaing tis as successful.
Love that green vintage style jumper, yummo!!
Thanks for sharing your inspiration!
Shaz in Oz.x #9

Your crocheted plaid is gourgeous.
Nice LO´s too.
Have a nice week!
Happy WOYWW,
Sussie nr 38.

You are one busy lady! Si many projects! I especially love the knitted jacket - it will be stunning! And I am a BIG fan of Stieg Larsson - I devoured the Dragon Tattoo books!

Great scrapbook pages Elizabeth, super throw and I'm sure I had a cardi like that one back in the day! Nice to see EM at home and looking OK, hope things get sorted there soon. Thanks for the visit BJ#2 (not been able to sit at my desk until today so I guess I'm getting better....jolly slow process though)

I'm sooo late getting round the desks this week! So glad EM is feeling better and best wishes for his monitoring and eventually his op. Your crochet is stunning and that cardi will be really cosy and so stylish too. Do you watch the scandi serials on tv - we seem to be into them at the moment - keeps me awake as I have to read the captions! xx Jo