... and a very happy Tuesday to you all too. 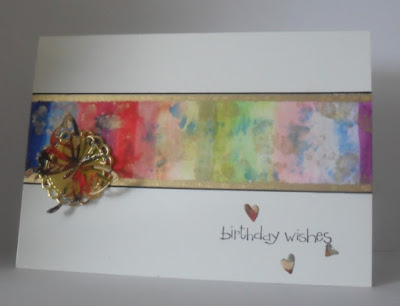 Prompted by this month's swap challenge for UKPC I've been experimenting with all sorts of alcohol inks, including Promarkers. This card is intended for my younger sister's birthday later this month. She doesn't read my blog so it's okay to share it here.

Here's how I made it: 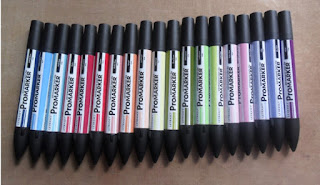 - I then took a Ranger Gloss Paper 7 x 10 card base - I'd forgotten I had these tucked away in my stash until the recent big sort out. 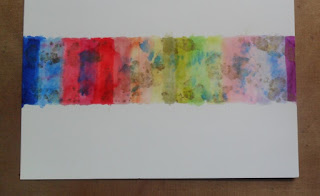 - with the top and bottom masked off I simply drew lines of colour, using the stubby end of the pens and working from each edge into the centre. The next step was to add some Adirondack Alcohol Blending Solution which had the effect of smudging the hard lines between each colour. This would work better with Adirondack alcohol inks but it didn't do too badly with the Promarkers. I also dabbed on some Gold Adirondack Mixatives which is not showing up too well on the photo but looks lovely in real life.

- to tidy up the edges of the panel I drew a line top and bottom with a Krylon 18kt gold leafing pen and then outlined that with a black Pigma Micron 08 pen.

- to decorate the card I cut out a decorated circle from a snippet of gold card using an inexpensive die from The Works and it cut perfectly. 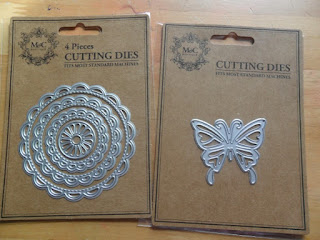 - I then used the butterfly die and cut it out of this piece of card that was another alcohol ink experiment. 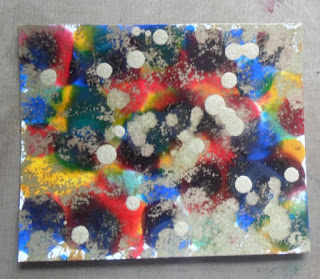 It was made on a scrap of smooth white card using Adirondack Alcohol inks in Sail Boat Blue, Red Pepper, Currant, Sunshine Yellow and Juniper with splats and dabs of the gold mixative. It looks very bright and messy here but once it was cut the butterfly looked a lot more toned down.

- almost finally, the greeting from Stampin' Up's So Happy For You set was stamped in Stazon Jet Black and then I added three tiny hearts - saved from the butterfly waste - just because they were too pretty to toss.

- to finish the inside, and because there was a little bit of bleed through from the markers, I added a plain white insert. 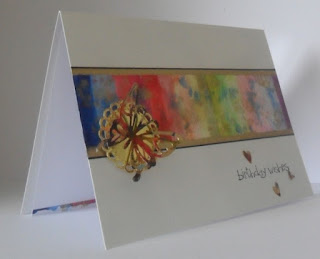 I did trim the bottom edge it with a sliver cut from the paper used to mask the card when colouring - it mirrored the front of the card perfectly.

Well, that doesn't look such a quick share but it's mostly photos and it really didn't take too long to make either.

Because I've used a couple of, admittedly tiny, snippets I'm submitting this to Pixie's Snippets Playground.

The reason for speed today is that as it is such a glorious day we are off out to Culzean Country Park. We're taking a picnic and  we intend finding a lovely spot to just sit and enjoy.

I wish you all a very lovely day.

What a gorgeous card Elizabeth - those Pro markers worked brilliantly! And the overall design is so elegant as well, love it!

Hope you had a great day with your picnic :)

Lovely card Elizabeth, Great technique with the Pro markers, I must give that a try.
Jean x

What a beautiful card, outlining in gold and black really adds to the card... and that background is just marvellous x

This is such a pretty card lovely design too! x

A really beautiful card Elizabeth. Love the technique too. Thanks for sharing. Barbxx