In A Vase On Monday - Simply the Best 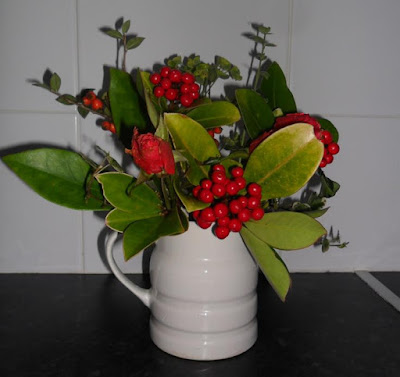 Here we are almost in December and I'm still cutting rosebuds from Simply the Best - the rose that just keeps giving. 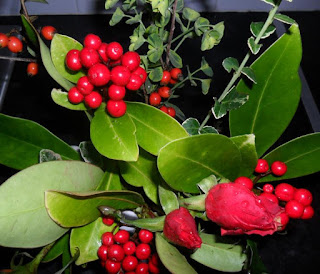 There's three buds altogether in this arrangement. Here's two. There's raindrops on them because I ventured out just after it stopped raining. To collect the berries from the skimmia and cotoneaster I squelched across the lawn to the shrubbery ... we will have to do something to improve that lawn. 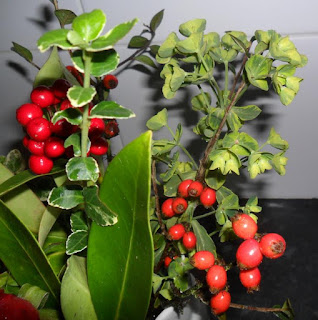 Just like last week I've included euonymus Emerald Gaiety and ivy, helix Silver together with a stem of euphorbia Ascot Rainbow. This is an interesting plant. According to the label it should have flowered around April/May time but it didn't. It should also be tinged with red and pink but it's not. As Nick Hamilton, son of Geoff, said in the newest issue of the Cottage Garden Society magazine, 'what an odd growing season' we've had this year! 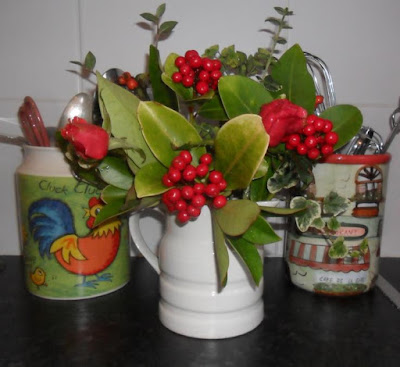 Once again, I've taken inspiration from Cathy and used the white kitchen tiles as a backdrop for my vase this week. Here's the last photo taken after I'd returned the pots of kitchen utensils to their rightful place.

If you like my offering for Cathy's In A Vase on Monday and would like to see what gardeners all over the world are arranging this week do pop over to Rambling In The Garden. Feel free to join in too, sharing your own weekly vase with a link to Cathy’s blog.

Simply the Best is trying so hard to live up to its name, isn't it? And those berries look so vibrant against the green foliage - lovely! Thanks for sharing.

What a beautiful and festive vase....the white is a perfect backdrop for the red and green.

The red berries are such a lovely shiny red, and the rose buds are splendid, Elizabeth. I added 4 new Euphorbs this summer, one is Ascot Rainbow, so perhaps I will have some flowers to cut next year. The plants are making wondeful little mounds of rosette-like foliage now. I like your pots for storing kitchen tools, with the cute chicken and garden scenes.

What an aptly named rose! The berries make a perfect complement.

What a pretty seasonal vase to kickstart the feeling of Christmas! I'm envious that you still have roses! :-)

You have given me wonderful inspiration here. I love the greenery choices you made. Weird about the euphorbia...as you mentioned, the weather probably affects the colour outcomes...