What a day this has been - Team Great Britain has won the Davis Cup, it's my umpteenth birthday and here's a card I made for the last Rudolph Day Challenge of the year, Pixie's Sunday Snippets and Hazel's CHNC too. It's always something of a miracle if I make a card that fits with one challenge but I think three is virtually unheard of! 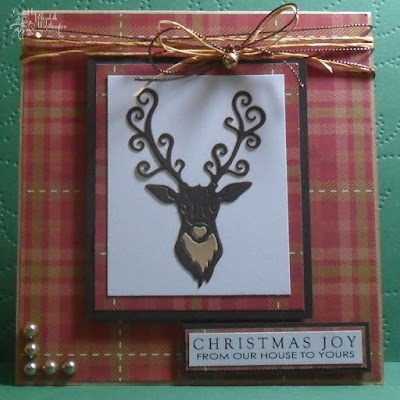 And it's no accident that it has a Scottish theme because it is intended for an elderly relative living in Australia - just a wee reminder of days gone by.

How it was made:


This was a fast card to make ... it took longer to write up the above than it did to make it.

As well as entering it into the challenges already mentioned I'm also entering the card into Hazel's other challenge:

Would you believe I started to write up this post hours ago?!?! There's been so many distractions today, but I've got to say it's been a very good day - one of the best :) I hope your day has been just as good.

Take care. I wish you a great week ahead.

Oh Elizabeth! I love your Scottish themed card. The tartan is wonderful and that TL die is so fab. I think your card will be such a hit!

Thanks for taking part in the November Rudolph Days Challenge and good luck in the prize draws.

LOVE this card! I know a lovely gentleman who lives near Aberdeen who would just love this. The tartan with that lovely stag's head is spot on!

So pleased you had a lovely day - you deserve the best!

Hello Elizabeth I hope you had a very Happy Birthday, albeit, the wishes are belated.
Wonderful card and just perfect for one going to the other sise of the world. Beautiful deer image and wonderful papers, Kate x

Elizabeth, Happy Belated Birthday wishes, and hopes that it was just the grandest day for you. I love this masculine & Scottish themed card. It looks very homespun with the plaids & that marvelous stag head as the focal image. I'm sure it will bring many happy memories to the expat in Australia too. Very thoughtful of you to think of that for him. TFS & Hugs. Hope that all has been well with you.