Was up early this morning ... it was so hot inside even though it was raining outside ... and that means I got going earlier too! I'm hoping to catch up some on my week of doing very little blogging, and even less crafting, today. But first I'll share the two cards I made for Scrappy Mo's June Rudolph Day challenge both using toppers recycled from cards we received last Christmas. 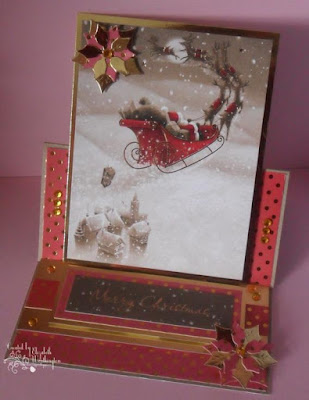 I also got to use up lots of scraps and leftover card. The red/gold spotted card was bits left from a kit that came free with a magazine and the gold mirror card, there always seems to be lots of snippets of that in the drawer so it was good to use up quite a few pieces making this easel card. The Poinsettia embellishments were made using an old but loved set of Spellbinder dies. The greeting was trimmed from the top of the topper and matted and layered to form a stop on the base of the card. 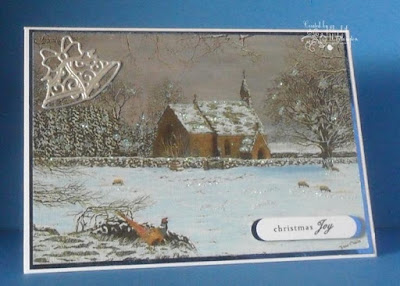 This is just a tent shaped card topped with a snow scene, matted on to mirror card - not obvious in the photo but it's blue. I used a glue pen to mark up various areas on the scene and sprinkled it with iridescent glitter to give it a more festive look.  The bells were die cut from silver cardstock and the greeting is from a page of Pink Petticoat Sentiment Ribbons from 2011, punched out and matted on to more blue mirror card.

I am entering this card into the following challenge:


Pixies Crafty Workshop - anything goes but must use snippets

Thankfully, the box of Christmas cards is starting to fill up so I may not have to hit the panic button come the first day of December after all. Thank goodness for Mo's Rudolph Day challenge keeping me on track :)

You, too, can join in the fun ... why not make a Christmas card ... it's never too early and you'll have less stress come December!

These are wonderful! I love that you used snippets and made the toppers from your received Christmas card stash. A girl after my own heart!

The irridescent glitter and the pretty mirri card makes them so pretty.

Sounds like you are having a heat wave...we are too! Amazing how the weather is often the same across the ocean. It will be around 40 celsius today. The air conditioning will be on all day, let me tell you. We hate the sound of it and the blasts of cold air, but it is impossible to exist without it in an RV here...as the tin structure heats up like an oven.

Thankfs for taking part in the June Rudolph Days Challenge.

A double wow from me Elizabeth! these are two wonderful examples of upcycling at its best! Brilliant!

Two brilliant cards and very well up cycled, love both of them. I have lots to up cycle, I must get my act together for next months RD and do something with them.

Two super Rudolph Day cards, I love the recycled toppers and the way you dressed them up and made them really festive looking. Lovely.
Jean x

Two beautiful cards Elizabeth especially the first one. Hope all is well at Casa Worthington.