In A Vase On Monday - Sunlovers

On Monday's I like to join in with Cathy's meme, In a Vase on Monday so here's today's vase - actually make that vases! 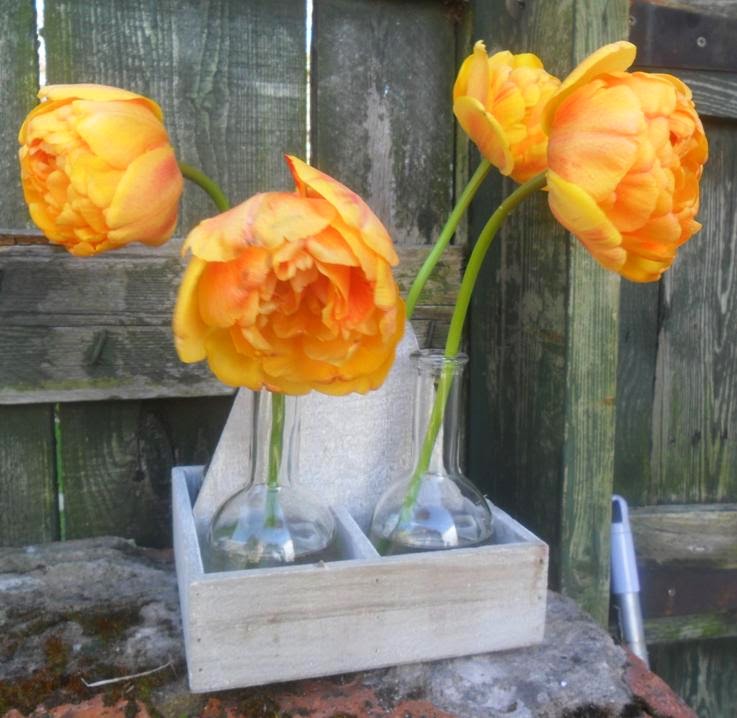 These stunning tulips may delight in the name of Sunlover but there's no sun out for them today. It's bitterly cold so I didn't linger for long out, just long enough to take a few photographs. Despite the change in weather these tulips have been causing quite a stir around here. Our immediate neighbours have been admiring them and a few have even been passed over the garden fence ... I think I may have to source a few more bulbs come the autumn! 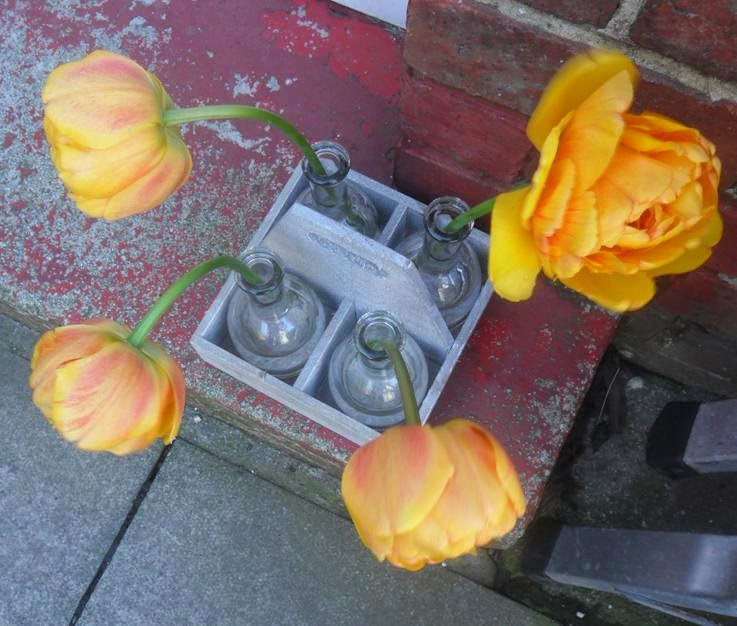 A bit of an odd angle for this photo - taken on our back doorstep which clearly needs some TLC - just to show that there are four bottles in the crate. I bought this set after seeing Cathy's milk bottles in a previous In A Vase On Monday  found in the Handpicked Collection. I liked them so much I hoped to order a set too but they were no longer available when I looked online. Instead, I found this great alternative though I  have to admit that's not all I bought ... a couple of other vases just slipped in at the same time :) That's the influence of Cathy's challenge ... I'm now even more of a collector of jugs and vases than ever before. 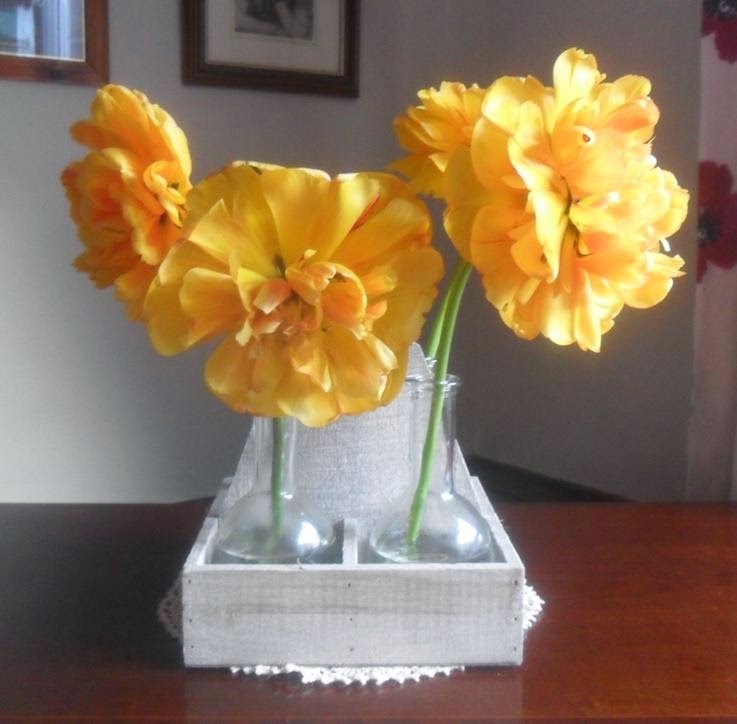 Half an hour in the warmth and the tulips have opened up even more. 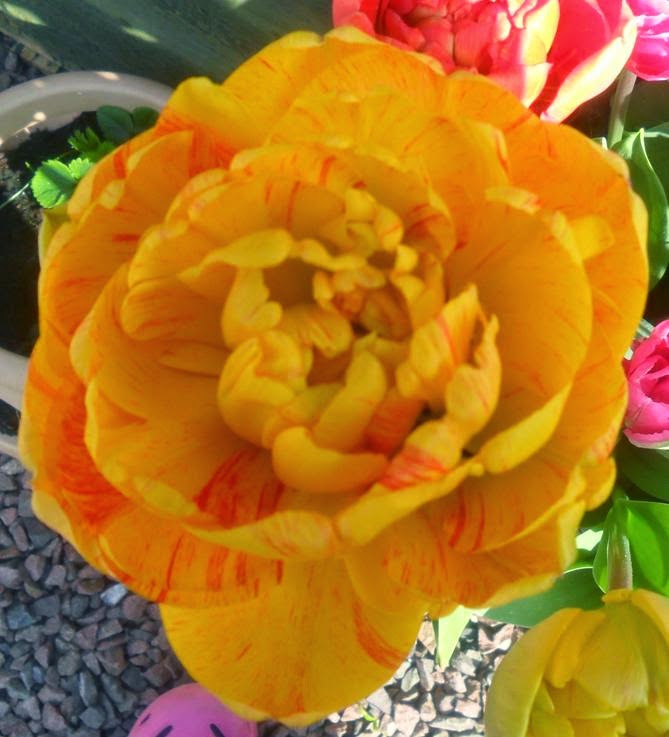 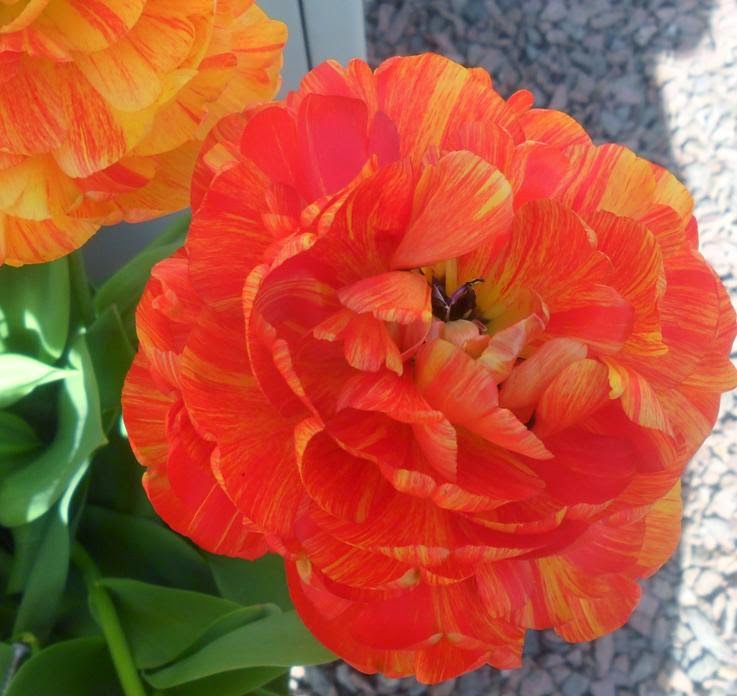 Most of the tulips are yellow splashed with orange stripes but surprisingly, given the illustration on the label, a couple turned out to have the colours reversed, and be this stunning dark orange with yellow stripes.

Although Cathy is on holiday this week, that hasn't stopped her posting as usual today. However, it's a very special post, marking her 1000th In A Vase On Monday and to celebrate she's put together a delightful collage of just a few of the many and various jugs and vases used over all those Mondays. Well worth a look!

Beautiful colors and I love how they reversed too....and I am admiring the 4 vases....

What lovely tulips, so rich. Great vases today too. It's hard not to look at any vase these days without thinking what it could look like with Monday flowers, isn't it?

Stunning tulips Elizabeth, and I love the way you have displayed them :o)
Jackie xx

Those are beautiful tulips Elizabeth - I have not seen that variety before so will have to look out for them in the autumn.

Hi Elizabeth, I love the way tulips open and change when they are cut. These are a beautiful colour.

I do not have any tulips in my garden yet. I am rather a fan of the minis...but these sure caught my eye. I love the way you have displayed them...that crate tote with the 4 bottles is fab!