I hope you are having a great weekend and a super Sunday. Ours has been spent doing much the same as the rest of the week - painting! The EM has been painting the hall and I've been painting with watercolours. I'm over simplifying, of course, but you get the picture ... he's been hard at work and I've been slacking keeping out of the way of the paint fumes :) 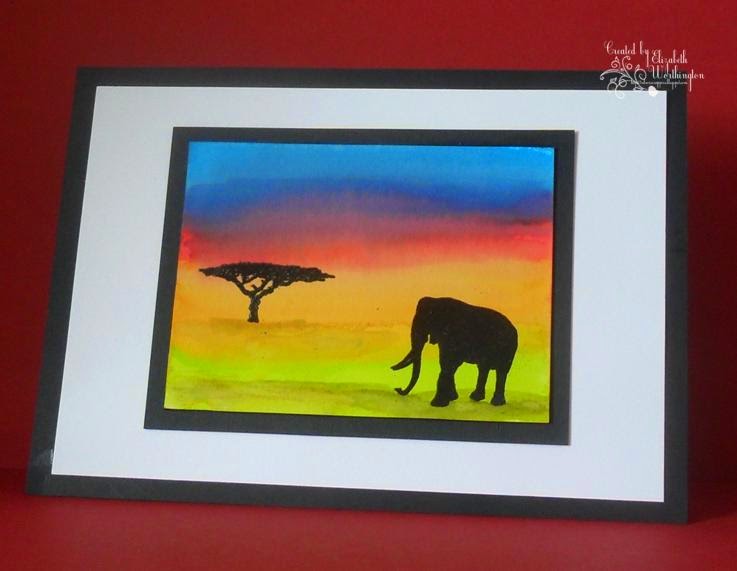 What you see is my first attempt to paint a background using the Spectrum Noir Aqua Tints that the postie delivered into my eager wee hands yesterday. After recording and then watching just about every Sheena Douglass demo on TV recently I simply could not, in the end, resist ordering a set ... an early birthday present :) The EM was all for it, said why not, you deserve it - I'm swishing my hair Cheryl Cole style as I type, of course :)

Sheena made the tints look so easy to use, as they need to be for an amateur like me :) You may recall that some time back I enrolled on a class aimed at water colouring for card makers. What with one thing and another I didn't make much progress but now I have no excuse not to start again!

It's small, the base is white card measuring just 4"x3" ... big enough though for me to try out this technique of swooshing colour about. All the colours used are from the Perfectly Primary set and the stamps are from an African Safari Silhouette set from Clarity Stamps, stamped with VersaMark and heat embossed with Stampendous Midnight Black powder.

The EM loves bright colours so he immediately claimed this as his own. It reminds him, he says, of photos he's seen depicting the Serengeti, hence the title. As he intends framing it I've kept the matting and layer to just black and white ... a rummage through the snippet mountain produced scraps of black perfect for the job.

Now I'm off over to link with Di's challenge at Pixie's Snippets Playground - Week 146 - where anything goes as long as it has a snippet or two on it somewhere.

Many thanks to you for popping in ... leave a comment if you have time because it's good to know that I'm not here on my own just blethering away to myself :)

Take care and enjoy what's left of the day.

Very lovely card Elizabeth and I like the colours. Greetings from Veerle

Awesome colours Elizabeth, not seen these new mediums but did get my grubby hands on the new Chameleon pens and very impressed so far.

Hi Elizabeth,
my what a super creation.
I love your fab painted back ground.
The colours are super.
Lots of crafty love. Jenny L.

This is gorgeous Elizabeth, the combination of stamps and brilliant colours make a lovely african scene.
Jean x

Oh wow Elizabeth! I have the stamps on order but couldn't stretch to the paints. I wasn't sure if I really wanted the paints or not but I now know I do! I really love your card and the Aquatints are going on my Chrimbo list, thank you so much for sharing this with us Karen xx

So beautiful is your card Elizabeth lovely Stamp and a lovely layout too!

That is absolutely gorgeous, Elizabeth! I love it! Stunning colours. got a feeling they are going to jump into my shopping basket very soon!!!

This is beautiful Elizabeth. Well done for learning something new.
I like your idea of avoiding the paint fumes...I think I may use that one, only I tend to be the one painting.
Just about getting kinda straight (for me anyway) after our jet setting holiday. Hopefully I will share more this week.
Hugs
xx

Oh Elizabeth, it's beautiful, now wonder your other half has claimed it, I love it too.
I'm really pleased you love your Aquatints, they really are very easy to use aren't they and it doesn't seem to matter what you do with them you get a beautiful result. Happy playing. I can't wait to see what else you create with them.
hugs Lisax

Great start looks fab keep with it. Hope the decorating is soon over love and Hugs Carole x

What a striking, dramatic card. It reminds me of a holiday I spent in Kenya many years ago.

Fabulous and so eyecatching Elizabeth! Love the background and the black silhouettes are so, so right!

Wow, Elizabeth, this is so striking! I love the African silhouettes against the fabulous painted sky, just gorgeous!

Always so much temptation on TV - I'm sure you will have fun with these paints and this is a beautiful first card.