In a Vase on Monday - The Cream of the Bunch ... and Storm Damage

Luckily I had the foresight to fill my vase in readiness for participating in Cathy's meme, In a Vase on Monday, today because the storm that was forecast arrived mid-afternoon and did it's worst. I'll pop a few pics showing some of the damage at the end of this post. 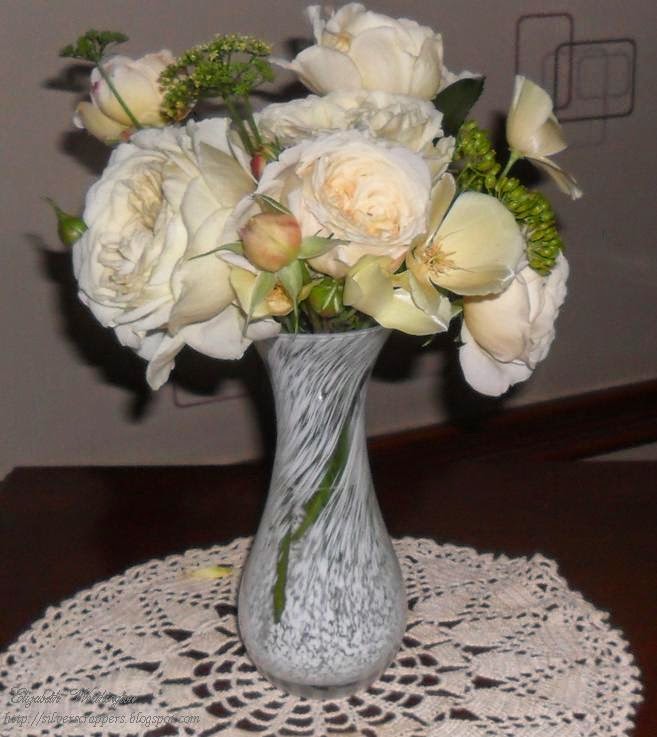 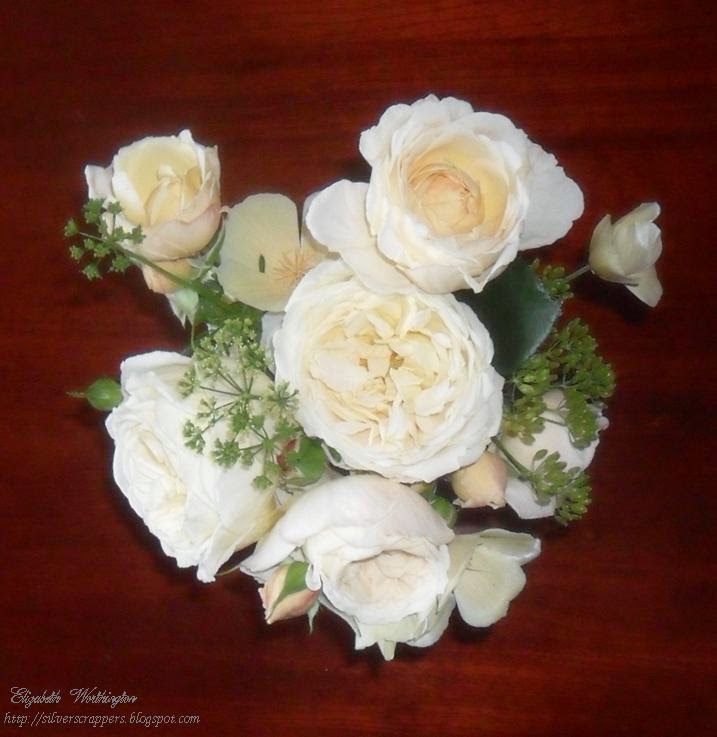 Despite it being October my roses don't seem to know that winter is fast approaching ... or maybe they are having one last hurrah before the year end! Whatever, they are beautiful, especially these creamy white shrub roses, Patricia Kent. The perfume is just delicious. I've teamed them up with a few of the cream Californian poppies, a fennel seed head, and a sprig of parsley flowers - who would have thought you could do more with parsley than use it as a garnish :) 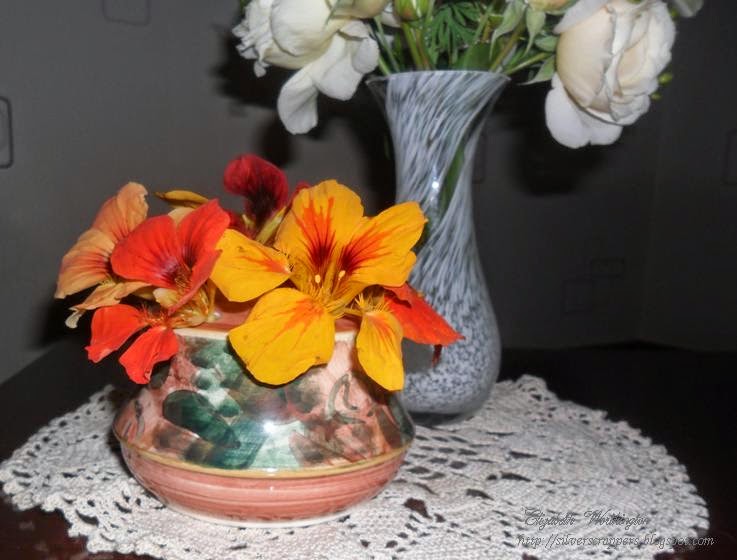 The nasturtiums have still got a few flowers on them but really they do need to be cleared away before the first frost turns them to slush. With that sad fact in mind, I picked a few heads and brought them in to enjoy. 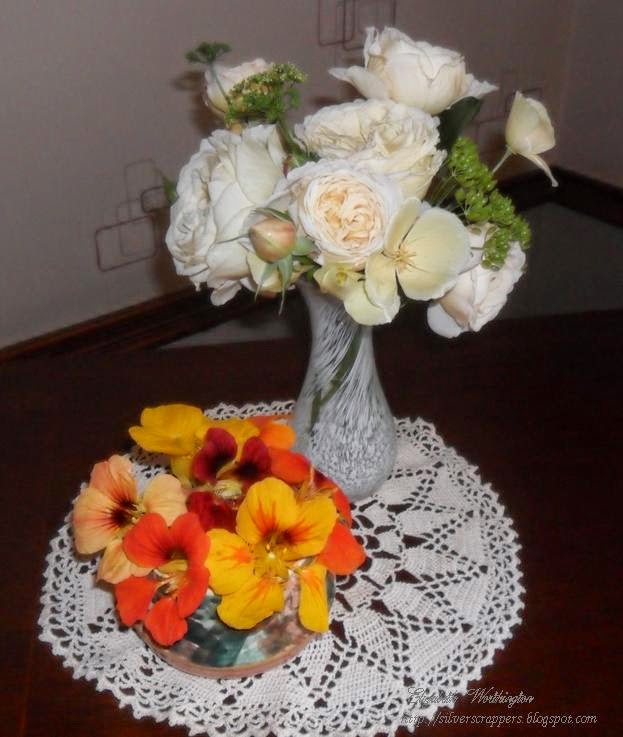 I can't say I did much arranging of the flowers. I just popped the posy of cream flowers into a white glass vase ... a birthday present from years back ... tweaked them a bit until I was happy with the way they looked and that was that.

The nasturtiums fitted nicely into a rarely used posy bowl, a holiday souvenir from the pottery in the Channel Island of Jersey. I do like the bowl, I just forget it's there most of the time.


And here's a couple of photos showing just a little of what the storm did to my mallow flowers in the last 24 hours.

They have been flattened. Recently I've been tidying up the beds and borders ready for winter, but hanging on to as many still flowering as possible. I think now my best plan would be to admit defeat and cut the mallows down. 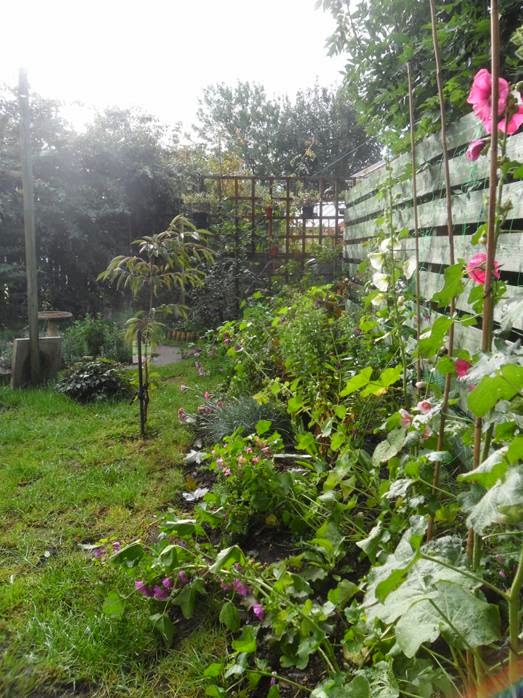 The long border where most of the mallows are growing. Glad to report that the staked hollyhocks withstood the winds.

Hope you've had a better 24 hours wherever you are.

Your flowers are amazing - what beautiful roses. I can only imagine their delicate scent.

Hollyhocks are one of my favorite flowers. I spread some seed out this year and only got small leaves; maybe next year they will come up so I can really enjoy them.

Sorry to see the storm damage. We'll be getting frost here soon. I need to do some cleanup in my little backyard.

Beautiful roses Elizabeth, shame the storm flattened you flowers. Those Hollyhocks are stronger than they look, love'm. My Mom used to grow them when we lived way up north.

Your roses are beautiful, Elizabeth. It's amazing how much colour is still in the garden. Thankfully, although we've had plenty of rain the winds haven't shown their face so the garden is still looking good. I bet yours will soon recover itself, nature is a wonderful thing.
Hugs Lisax

Your flowers look beautiful Elizabeth, especially as it is now October.
Jean x

Oh Elizabeth that is too bad with the storm. The rain and cold wind has been whipping the garden here...so the flowers will be winding down here. Your cream roses are gorgeous...perfect and so elegant too in that vase. I had to pull my nasturtiums so I was happy to see yours.

Your vase looks as if it is a white version of the Caithness glass one I used today - what a coincidence! The roses look gorgeous and clearly missed the storm - these full petalled ones wouldn't have liked the rain at all! I have made a note of the cream californian poppies and must look these out for next year. My nasturtiums have suddenly started looking really good, so perhaps they could make next week's vase - yours look perfect in this cream bowl, don't they? I am so pleased to have our rain, although after a dry afternoon we have had a real downpour this evening which may have flattened some things. Thanks you so much for joining in and showing us more of your garden too.

Your roses are absolutely stunning! My nasturtiums are just about done. I will miss them as I've had a vase of them somewhere in the house all summer. Fall storms can do so much damage that I am always wary when one is forecast.

Beautiful arrangements. A shame when the weather batters things around.

Your flowers are beautiful Elizabeth, so is your arrangement. I struggle to get what few flowers I have looking "right" in a vase! Cathy x

Beautiful colour on those roses, such a lovely soft cream, easier on they eye than so many of those icy whites you get. Sorry your mallows got flattened so dramatically, we got off lightly on Anglesey.

The cream roses are magnificent - and they're scented too! How wonderful. None of the roses I inherited with our current house have much, if any, scent. I'm sorry you lost your mallows to the storm, although I must say I'd rather lose my flowers to rain than to heat and drought. A day doesn't go by anymore without the newspaper reporting dire news about our ongoing drought.

Hi Elizabeth what a lovely post today your flowers are just so pretty. sorry I've not been commenting on your posts but been away on holiday all September. I've been looking at all your September posts some gorgeous flowers and photos and wow those great cushions wonderful I'm really feeling the cold now I'm back its a bit of a shock from 90+ degrees. Hope you are well love and Hugs Carole x

Your Monday vases are always so pretty :o)
Jackie xx