This should have been posted already but life and the fantastic weather got in the way, but I'm here now to right the wrong. What follows is a mainly photographic record of Flat Susan's last few days on her jollies in the Highlands of Scotland.

These photos were taken on an afternoon when we went dolphin spotting on the Black Isle at the very popular Chanonry Point. The lighthouse you can see there is now a private home but it is possible to walk in a complete circle around it. We did spot dolphins leaping about in the firth but I wasn't quick enough to snap them in action, however Flat Susan was delighted to catch a glimpse of them.

The following day we all went on a wee road trip across the mountains, from the east coast to the west, to Ullapool passing grand scenery on the way. There are three dams on this road but the Glascarnoch Dam, near the Aultguish Inn, is the most striking. It was June but we could still see pockets of snow on the mountains as we drove through. 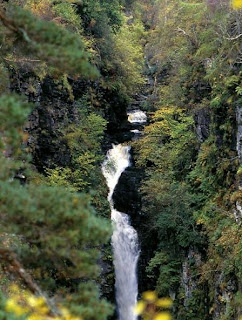 One of the most striking sights was the inaptly named Corrieshalloch Gorge, Ugly Hollow in English ... far from being ugly it is quite stunning. Corrieshalloch is a box-canyon, cut some  2.6 million years ago by Ice Age glacial meltwater. The River Droma runs through the gorge, dropping 100 metres in just 1.25 km, in a series of waterfalls, including the thunderous 45 m high Falls of Measach - very dramatic. For the bravehearts among us there is a suspension bridge near the falls which was built by John Fowler (1817-98), joint designer of the Forth Railway Bridge - so it should be safe! 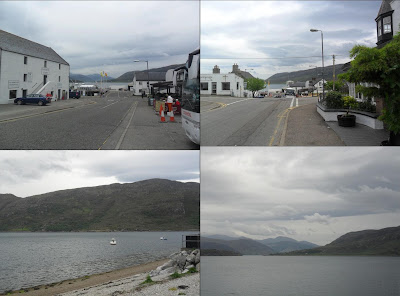 Ullapool is a picturesque village located on the edge of Lochbroom and is surrounded by beautiful mountains. We were, unfortunately, too late to take a boat trip from the little harbour out to the romantically named Summer Isles where it is possible to spot seals and porpoises in the sea around. We did, however, discover a pub near the harbour serving the best fish and chips ever and a well stocked bookshop directly opposite ... Ullapool hosts a book festival annually. I can't think of a more romantic or prettier setting for the event. Sadly we were not there long enough to do much more exploring but hope to return on day ... maybe for next year's book festival :)

The final day of Flat Susan's visit found us on a serious mission to find the Loch Ness Monster. First we stopped of at the Loch Ness Monster Exhibition & Centre at Drumnadrochit, where, much to Flat Susan's amusement, we came upon what must be the original yellow submarine :) Inside we were taken through a series of entertaining shows featuring lasers, digital projections, and special effects. There was plenty of monsters on sale in the shop but we still hadn't spotted the real Nessie.

From Drumnadrochit we drove north along the shores of Loch Ness to visit Abriachan Gardens and enjoyed an hour or so strolling through, and climbing, this hillside garden. Flat Susan loves flowers. Here's just a tiny selection of what we found in bloom in June. 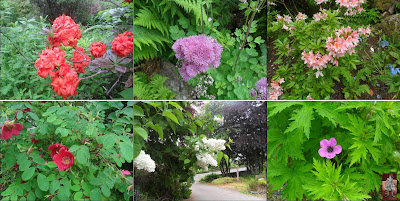 For the Poppy lovers among us. 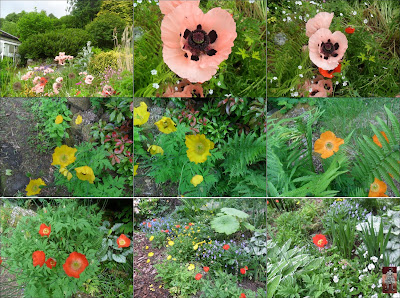 And for the Columbine/Aquilegia lovers

And more Hostas showing no signs of slug damage 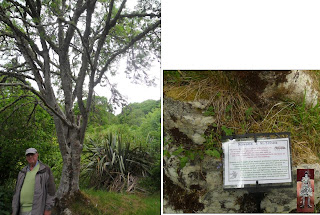 The Rowan Tree, aka the Mountain Ash, is associated with witches here in Scotland. Folklore has it that if you plant a tree near your house it will protect you from witchcraft and enchantment. Flat Susan was totally enchanted with the sign beside this old tree :)

That evening, Flat Susan took her final stroll through the grounds surrounding the holiday cottage ... 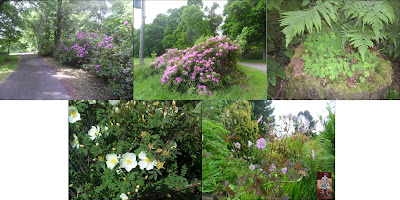 ... then down the road to the bridge over the River Beauly to see the Kilmorack Dam once more and for a last sight of the 'lupin island' ...

... as usual there was one lone angler out in the river, no doubt hoping to catch a salmon.

The following day it was time to for us to be on our way home, whilst Flat Susan went on her way to South Africa to continue her amazing trip. I'm sure you are all wondering if she ever did catch sight of Nessie out there on the very placid waters of Loch Ness. Well, no, Nessie was never spotted in the waters of the loch but up in the hills, sheltering from all the Nessie spotters ... 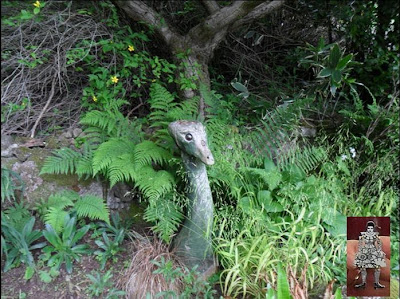 Bon Voyage, Flat Susan, safe journey and have a wonderful time wherever your trip takes you.

Wonderful post Elizabeth, and such beautiful pictures. I don't know about FS but I enjoyed the trip so far.

Beautiful photographs Elizabeth. It must have been a great trip.

Beautiful photos. Makes me feel like I was there yesterday! Never mind it was 1998!

Fantastic photos Elizabeth, love those flowers and I adore poppies. Bet FS was delighted to see dolphins, I know I would be.
Her trip to SCotland has made me long to visit again and if I do I will certainly be looking at her blog to plan my route.
Thank you so much for hosting her and for all the wonderful accounts. They were worth every minute you slaved over them.
Love Nessie in the woods - Hugs, Neet xx

Beautiful Photos Elizabeth and that Flat Susan gets in everywhere....lol xx