I'm late. I couldn't be later. To blame - it's the EM doing his Christmas shopping ... again! Why it has to be done on the same day as What's On Your Workdesk Wednesday is a mystery, but it does so here, at last, is what's on my desk. 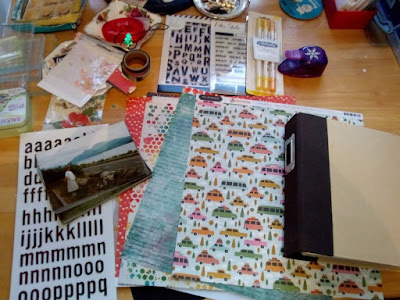 There's a lot going on. 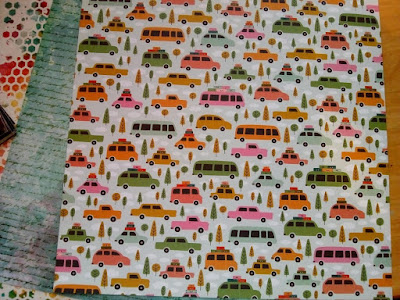 I have a new Mind The Scrap kit to play with and it strikes me that that 'Road Trip' paper is ideal to use with the photos of our first trip round the Highlands of Scotland. That was way back in 1995 - a lifetime ago.

I'm also debating with myself on whether to keep a record of Christmas in the small album I found in my stash. It's the ideal size. I've tried 12x12" Project Life style in previous years and always stalled but I did rather better in 2015 with the smaller size. It's full and almost finished! And that's the reason for the two stamp sets that are out. They are new, of course. The Heidi Swapp alphabet, it came with the MTS kit, has both large and small letters - very useful. The Elle's Studio set - found at Hey Little Magpie - contains lots of Christmas related words, phrases and icons that are just right for using in the album. Especially, as I do not intend buying a Christmas collection this year but will use up what I have in my stash already. I suspect I have enough tucked away to last more than a few Christmases too.

And for the record, here's the layout that can be seen in it's part done state on last week's desk. 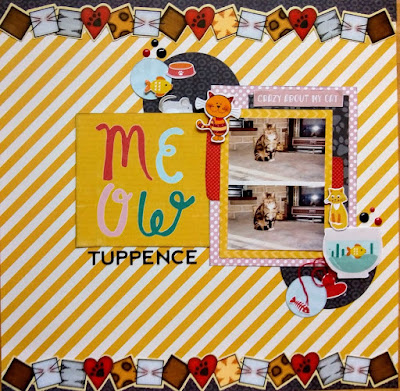 It wasn't until I came to file this page away yesterday that I discovered I'd already scrapped the photo - i.e. a blown up version - of Tuppence before. Forgetful or what!?!? The decorative trims top and bottom came from a page kit bought in America in 1996 - 23 years ago! They still looked as good as new too.

And now the book bit. This week it's 'The Break' by Marian Keyes. 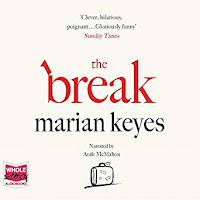 There's not a lot I can say about this apart from it was disappointing. I downloaded the audio-book after seeing the author discussing her writing on The Big Scottish Book Club on BBC Scotland. She was entertaining but the book was rather less so.  It's the story of a relationship that was thought to be forever but hits trouble as the couple become middle-age, and one, the husband, decides to take a break and go backpacking around the world for six months leaving his wife to care for their blended, teenage, family. Sadly, I found the characters very difficult to like. It's also a very long read.

Okay, that's it from me this week. I'm off now to see what Julia and our fellow deskers have been showing us today.

Take care everyone and have a great week ahead.

Hi Elizabeth. What gorgeous paper trims! The thing about paper and material and stuff... it never goes off! Doesn't matter how long it lives in the cupboard.
Thanks for the tip about the book. I devour books - just love 'em - so go round charity shops and buy them, read them, then take them back to a different charity shop. I often see Marian Keyes books and have often wondered whether to buy one...
Take care. God bless.
Margaret #3

Hi Ellie. Better late than never 😀 Love the new stash and will look forward to seeing what you do with it.
Hugs,
Annie x #10

I always used to enjoy Marion Keyes' books, what a shame that was so disappointing. Love the alphabet stamp set, (can't resist them myself!!) The paper will be perfect to document your travels round the highlands! Helen #2

Evening Elizabeth, awww maybe EM needs to come join us at WoywW too he may be feeling left out hee hee!! Love those stamp sets, i'm very drawn to journal and letter stamps but I have way too many just like face stamps but it's an addiction that's not harming anyone so I carry on buying. Look forward to seeing what you create with them.
Good idea about keeping track of Christmas, I used to do this every year but as the children have grown and need very little it's become more of a Christmas food list as everyone, including Partners & Mums descend on me for Christmas day & dinner.. I love it!!
Happy WoywW Tracey #4
P.S Hope the shopping was a successful one x

I love the "travel" paper - you will make a great job of recording your trips with that. Thanks for the info about the book. It always amazes me how an author can draw you into a story and the characters - a pity this one didn't manage it. I don't think I have read any Marian Keyes.

Hi Elizabeth, great stash today. That alpha with the two sizes is a great idea. Love the layout too. I too struggle with books is the characters are not particularly likeable, we would not choose to spend time with 'real' people who are not likeable though, so I suppose it's only natural.Have a lovely week, Hugs, Shaz #18 X

Marian Keyes has been on a couple of really good, fun podcasts recently and I’ve got The Break in my audible library. I shall listen to it soon and see whether we agree. Difficult to like characters make a book quite hard going don’t they. Meanwhile, loving that you’ve got your scrap on! The MEOW layout is lovely, I’ve scrapped an identical pic just a couple of months apart, so I think you’re safe, E! Love that road trip paper, your desk looks really inviting.