I hope you are having a good day. After yesterday's dreadful storm we have calm.

Here in Ayrshire we are very lucky to have lots of lovely places to visit - that is, when the weather is good. One of the best is Loch Doon, famous for it's ospreys, the Scottish Dark Sky Observatory and the ruins of this ancient castle. 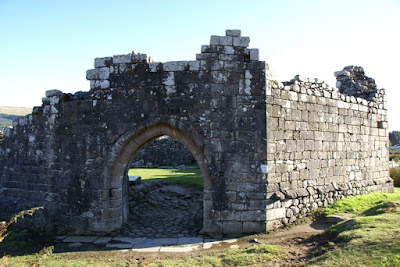 The castle originally stood on an island in Loch Doon. It has quite a history having been attacked several times throughout it's history. Finally, after the attack by James V, the castle was abandoned and it remained largely intact until the nineteenth century when stone was stolen from the site to create a shooting lodge elsewhere. 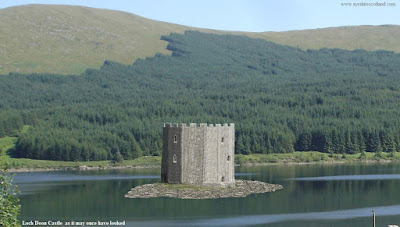 This is a representation of what it would have looked like on the island. Eventually, in the 1930s, the castle was taken down, stone by stone, and re-erected on its present spot by the side of the loch.

This was necessary because a dam that was built for the hydro electric system raised the level of the water in the loch, threatening the walls of the castle. 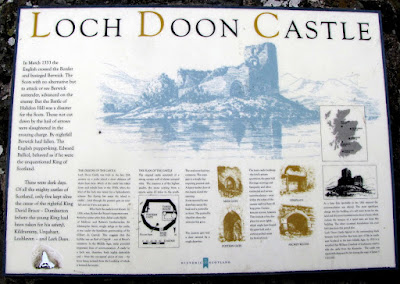 Here's a layout made with two photos taken in the ruins. The EM looks as though he fancies himself as the Laird of the Castle. However, lovely as the location is, it's perhaps a bit too remote for a couple of oldies such as us. Beautiful in summer, inaccessible in winter. 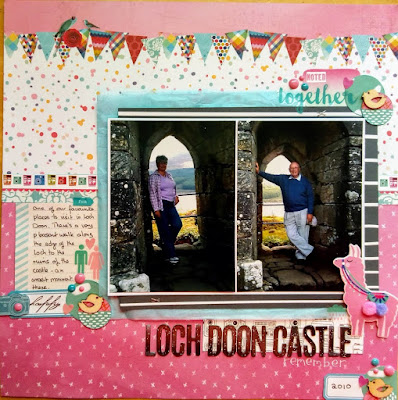 We took our first walk along the road that winds round the loch in 2010 - about the time we relocated to Ayr - and, of course, couldn't resist having a look around the castle. The view from this window is spectacular. A roof, panes of glass and central heating - it would be the perfect room with a view.

The materials used in the layout are mostly scraps leftover from earlier Mind The Scrap kits. Thickers used for the title are American Crafts 'Wolf Pack'.

That's it from me today. Thanks for popping in, take care and have a lovely evening.

Hello Elizabeth, what an interesting post, lots of fabulous history there. Your scrapbook page has a super layout and super photos of you both, Kate x

What a great layout, Elizabeth! Fab pictures, too - I love wandering round old castles, imagining all the people who lived there. But I wouldn't give up glass windows and central heating to travel back in time lol!!

Beautiful photos Elizabeth and I love your scrapbook page too. Many thanks for the information, very interesting x