What's On Your Workdesk Wednesday - Week 533

I'm early! Given my usual tardiness, I think that's worth noting. So another week has whizzed by. it's WOYWW day and my desk has a mess of this and that on it again - again. 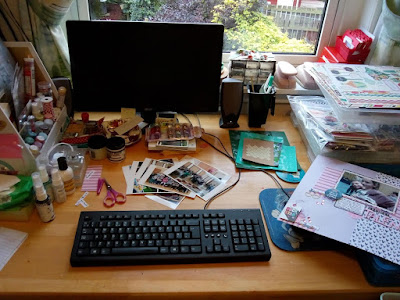 The photo was taken an hour or so ago when the light wasn't as good as it is now (despite the weather forecast for torrential rain the sun is shining and all looks well in our part of the world) but I think you can see the mess clearly enough. There's a teetering pile of scrapbooky - is that even a word - stuff top right. I should move it before the sun does damage. Front right is my most recent scrap layout - I plan to file it in an album next time I go downstairs - that'll will be when I need refueling with tea. To the left of the teetering pile is a wee stack of stencilled pieces. Last week I was 'experimenting' with texture paste, paints and ink sprays, you can see them piled up on the left, for layouts so I scooped up and smooshed card scraps with the leftovers. There's also a pile of photos, behind the keyboard, printed late yesterday - the eagle-eyed will recognise that those on top are from this year's WOYWW crop. Some, all, hopefully, will be scrapped this week.

And just so you don't think those stenciled bits and bobs are wasted, here's a few cards I made with them this week. Oh, yes, it's not all scrapbooking! 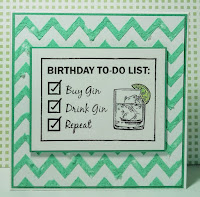 The background for this one was made with Ranger's opaque matte texture paste that had two acrylic paints, Vicki Boutin's 'Blue Hawaiin' and 'Juicy Pear', and iridescent glitter paste, also Vicki Boutin, added. The stencil is an old one, That Special Touch 'Chevrons'. The topper is made with a fun stamp, 'Birthday To-Do List' from Crafter's Companion - found at The Range. 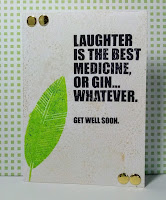 The background to this is simply sprayed with gold ink, Heidi Swapp's Color Shine. I believe this has been discontinued - shame, it's one of the best gold sprays I've found yet! The leaf, more of the texture paste tinted this time with just the 'Juicy Pear' paint, is from Dark Room Door's 'Carved Leaves' and the stamp, 'Get Well Soon' is another gin themed one from Crafter's Companion. Never let it be said I'm not up with current trends. 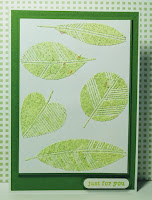 On this last one I've used more of the 'Carved Leaves' stencil. It's very simple but I do like those leaves as they are and without embellishment. 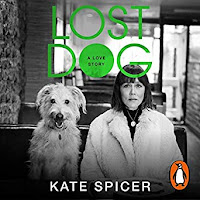 And now the book bit. This book is one I listened to quite some time ago but it's stayed with me - probably because I'm a sucker for any book that has a dog, or cat, in it. Kate Spicer's Lost Dog: A Love Story is about a rescue dog, a lurcher called Wolfy, her relationship with him, and the lengths she went to find him when he went missing while he was in the care of her brother. Reviews for this book are mixed. Kate Spicer is a journalist who knows how to tell a story but the prologue is perhaps just a bit too honest, describing as it does her cocaine-fuelled life-style, but there's no doubting her love for Wolfy and it's the search for him that held my interest to the end.

That's it for today. Until our next Whizzday, I wish you all a wonderfully crafty week

Morning Elizabeth. Sounds like a really creative week - lots of experimenting and playing. Love it! The finished cards, using what you had made, are great . Well done
Thinking of refuelling... time for a hot chocolate I reckon...
Take care. God bless.
Margaret #5

What a great week. Good luck with the scrapbooking. Helen #4

Glad you had a lovely week crafting and like you say nothing like a good book,,
Lilian B #12

Scrapbooky is definitely a word! I particularly love your first card - that stamp is fantastic! Have a lovely week. With Love & God Bless, Caro x (#8)

Lovely variety of cards and so beautifully executed. I’m reading The Good Daughter by Karin Slaughter for my book group and I am finding it heavy going. Now I’ve done two weeks ironing, I have given myself permission to go back to the sewing machine.

Good to see all the creativity on your desk! Have a wonderful week. Dorlene #23

Lots going on with your space this week. I'm sure you had so much fun being creative! Happy WOYWW!
Glenda #15

Hi Elizabeth, I know it's late but have to go out again tomorrow so trying to get the visits done. Loving your cards. Have a great week and a very happy woyww, Angela x13x

Lovely cards - I like the leafy one. I have started reading again - I went off it for a while and crafted but have enjoyed reading for the last few weeks and now I can't stop!! xx Jo

I think WOYWW is the place for inventing new vocabulary, Elizabeth. Any newcomers will eventually have to take a language course! Great work from you this week, and I particularly like the card with the leaves - simple and elegant. Thank you for visiting. Yes, it was a busy day! Today my hubby and I went out which was lovely, but it does put me behind.

Thumbs up 👍 on “scrapbooky”, def a word, Elizabeth, totally concur. Also totally agree how annoying it is when they discontinue a fav thing like your yummy gold spray, no fair, that!
I actually find it reassuring to find a work in progress desk, makes me feel quite at home indeedy!

Love your mention of a cups, mine is empty too, never quite know how that happens do quickly but as its a cold night it would really be cold if hadn’t drunk it!

Agree with you on the too much info on intro in book, a good time not to read a prologue.. if one knew before one had!
Happy belated WOYWW, a busy day so you’re my last for evening.

Nighty night 😆😉😴here anyway but not there. Pray you and EM are both well, you sound it. Love my chevron stencil too an oldie but goodie and some great cards, too.
God bless you dear Elizabeth and thanks for popping over you made my day.
Prayer hugs, Shaz in Oz,x