In A Vase On Monday - Take Two

Apparently in the UK it's still summer until the end of August. Not so here in Ayrshire where it's definitely more autumnal - lots of mists but little mellow fruitfulness - than summery. And that means that today's trip round the garden has also been less fruitful, but I did find a few late developers and even some that shouldn't be there at all. 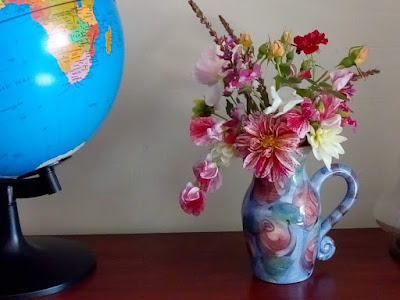 The sweet peas,  Lathyrus odoratus 'America', still keep coming for now though hubby's Spencer's are all but finished - just one single white one left to pick. 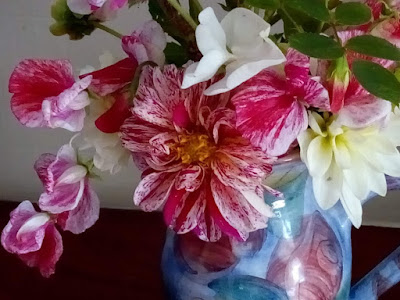 I recently bought several pots of dahlias, going for a song, from a local store. The labels didn't specify the variety, just the colour, and I chose white, red and pinks. It was a happy coincidence that one pot contains flowers very similar in colour to the sweet peas. 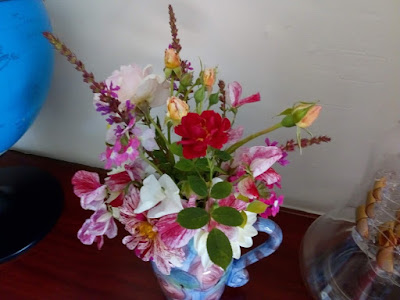 To fill the vase I've added leftovers found around the garden. There's the last of the hybrid musk rosa 'Felicia', a spray of apricot buds from the climber, 'Susie' and a tiny red bloom from the miniature 'Ruby Rambler', pink loosestrife, lythrum salicifolia 'Robin' and some pink and white verbena. This last, shouldn't be here at all. It was planted out last year as summer bedding but somehow it survived the winter to bloom again.

Now, I think I should explain why I have entitled my arrangement 'Take Two'. It's because I had intended to share this vase instead. 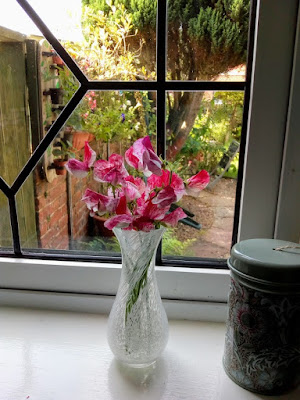 'Take One' - a lovely bunch of sweet peas in my beautiful white Caithness glass vase. Sadly, minutes after placing the vase on this windowsill disaster struck and it crashed to the floor. Why? We've no idea. It's a mystery. Of course, the neck of the vase is damaged - I'm hoping to find someone who works with glass - perhaps all is not lost and it can be repaired.

Linking this post to Cathy's meme, In A Vase On Monday, on Rambling in the Garden and joining with many others who share whatever they have found to put in a vase this week. If you have filled a vase today, I'm sure you would be very welcome to join in too.

Oh what a shame about your vase - and what a mystery too! What an interesting selection you have in your vase today - I really enjoyed looking out for the individual components as you listed them. No seasonal mists here yet, but out of the blue (the sunny blue!) we have just had a sudden heavy downpour, which was not forecast at all ps f you can get to car boot sales these Caithness Glass vases appear frequently, although admittedly there don't seem to be as many white ones around

A pretty little collection and you've still found things to cut though I know what you mean. There is a chill in the air morning and evening and a heavy dew which we haven't had recently. Hopefully there are some more weeks of summer.

A burst of wind through a window, perhaps? I hope you can repair the vase, Elizabeth. I love that red and white dahlia.