WOYWW Whizzday again and I'm not really ready for it. It's been a busy week so far and we are only half way through. And it's only a few more weeks, 21 days in fact, until we leave here on our way to WOYWW's tenth anniversary crop. I'm so looking forward to it but I'm also aware that I have a lot to do before then too - none of which is evident on my desk today!!! 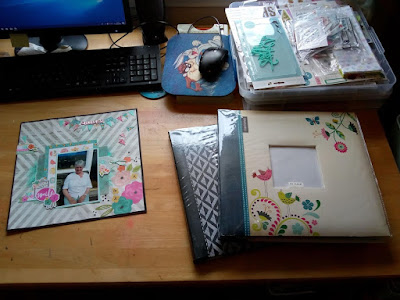 Sorry, the light is poor - the weather is dismal and it's too cold to do anything other than take refuge in the craft room. I admit that I have had a bit of a tidy up - I can't work in a muddle and it was an awful muddle after Sunday's crop. So not much to show really - the usual box of scrappy delights in the background, a couple of albums and a layout from the top one in need of some repair to the front. I decided to put file away the layouts that had piled up in here and whilst moving pages about - I try to keep them in chronological order, more or less - I discovered that the bunting on this one was coming adrift. I'd used what was supposed to be a permanent glue tape but clearly it isn't - lesson learned! 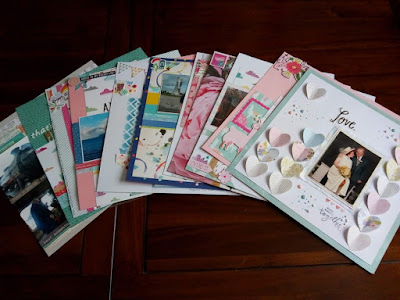 The pile - not as man, I believe, as some folk have waiting to be filed away but more than I like. The black and white album on my desk is one I'm putting together for my son's birthday later this year. He'll be fifty - hard to believe. There's no chance that he will read this so I'm safe mentioning it. Of course that's another project sitting on my desk, remember the garden album, to nag me. I'm surrounding myself with nagging WIPs!

To the WOYWWer, I think it was Stacy, who expressed concern for my keyboard being out on my craft desk. Fear not. I always put the keyboard well out of the way when I'm messing with anything wet, inky or painty!

And now the book bit, and I have a great read for you this week. 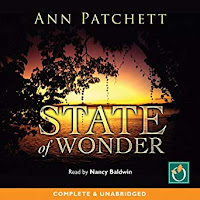 'State of Wonder' by Ann Patchett is engrossing and hard to put down. Marina Singh, employee of a large pharmaceutical company, is sent into the isolated regions of the Amazon rain forest to investigate the death, and to hopefully bring back the body, of one colleague and meet up with her former professor and team leader Dr Annick Swenson. Dr Swenson has been developing a drug which could make it possible for women to remain fertile way past the menopause. I must admit I did find the idea of women still fertile and continuing to give birth well into their seventies somewhat alarming, and maybe just a bit far-fetched. But then I'm in my seventies! That aside, the descriptions of the humidity of the insect infested jungle, the hidden tribes, some still cannibalistic, with their own rituals and cultures, I found fascinating. I'd say this is a good summer read.

That's it for this week and, besides, it's time for lunch so I better go but I'll be back to check out your desks and leave a comment where I can ... sadly, that's not always possible for some reason, especially if I'm using my mobile phone.

Take care everyone. Have a great WOYWW and a fabulous week ahead.

Disappointing weather isn’t it, I hate the gloom. Never mind though, all the chatter from those WIPs will keep you company! Mind, you get so used to them. Wing there tha tin the end, you neither see nor hear them!! My LOs go away within hours of being finished, mostly because there is nowhere good for them to be without risk of being used as a surface for something else! I love the look of your pile, wouldn’t it be great if we could have a ‘haul your albums for show and tell’ day!

Great layouts Elizabeth, good job there. Cold and wet down here too. Looking forward to the crop, can't believe how fast it's come round! Have a lovely week, Hugs, Shaz #3 X

What great pages Elizabeth, you do have a great tidy place to work on it all. I seem to tidy one pile as I create another behind me but get there in the end. Your braver than I am using your phone for blogger, it would take me an age to write a comment. Happy WoywW Tracey #5

Just running through but wanted to say Happy WOYWW!
Glenda #21

What a lovely idea for your son's birthday.....very personal. I long for the sunshine Ellie. These gloomy days just dont do it for me.
Hugs,
Annie x #12

The weather is horrid isnt it. Love the pile of layouts! Thanks for sharing. Happy WOYWW and have a great week. With love and God Bless, Caro x (#17)

Love the idea for your son's birthday! I hope the weather cheers up too, no matter how much we need the rain, it is so depressing to look at! at least I was lucky and didn't get caught in it. Helen #1

Hi Elizabeth, we needed the rain but it would be better if it came during the night and then cleared up during the day. It always manages to come at the wrong time. I just don't trust glue tape, it is just not safe to use it on anything special, I leaned this a long time ago and always used wet glue now or combine the two. Have a lovely creative week and a happy woyww, Angela x15x

Hi Elizabeth, I love the idea of the album for your son's birthday. If I start now I could make one for my daughter's 40th ... that gives me 6 and a bit years! Looking forward to seeing you at the Crop. Have a lovely week Heather x #11

Sorry for the belated comment, I went straight to bed after work yesterday feeling lousy. You are definitely more disciplined on the scrapbook front than I am Elizabeth. I bought some scrapbooks many years ago thinking I might make something special for 18th birthdays. The boys are now nearly 25, nearly 27 and nearly 20 and they are still sitting in their boxes. Maybe I'll have grandsons one day lol. Happy WOYWW. Sarah #4

Thanks for the visit. I have enjoyed your scrapbook pages, and I peeped about as I've been missing so many posts. Cutest little ones and I am in awe of the pretty flowers. Our weather here is MESSED up, we now have a few tulips and the sweet little viola's that tolerate cold, blooming but limited buds etc just wind, cold and rain. Our road tonight was almost AGAIN impassable 1/2 mile of muck. So garage/cars are a mess. Enjoy a great week.

Hi Elizabeth, Love the album and your lovely LOs. I miss not scrapping, but just not had the time.

Thanks for stopping by my blog.

Sorry I am so late!
Well, today has been a lovely sunny day down here, hope you had the sun as well. I hate those gloomy days even though they herald craft time for most of us - any excuse.
Love your tidy desk and love the idea of the photo album for your son - a great gift and one which he will no doubt treasure for years to come.
See you in a couple of weeks.
hugs, Neet xx7

Good morning, Elizabeth. I am way late this week. Been giving the studio a serious dig-out and sort. Slow going. Great scrapbook pages! if it's any consolation, I'm reading about dismal weather on just about every blog. Soon we'll be complaining of the heat. LOL and taking refuge in the AC to do some crafting. We always find a way, don't we :-) Creative Blessings! Kelly #28

Sorry I'm so late replying, the days seem to fly by and I can hardly believe it's Wednesday again tomorrow! You have been busy with all those LO's and that's a lovely idea doing an album for your son - lots of memories for him to treasure.
Thanks for the earlier visit,
Diana x #18