After the lovely weather we were enjoying last week today it's raining. Never mind! There is always What's On Your Workdesk to console me. That's the fun meme brought to us by Julia our Queen of Desks. over at the Stamping Ground, in which a worthy bunch of crafters reveal all. Here's what was on my desk this morning. 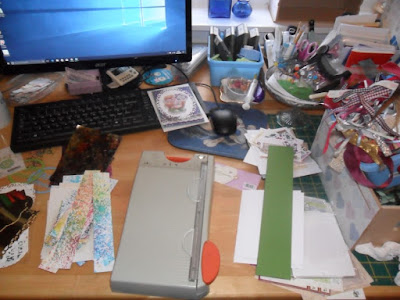 Of course, I had to clear it, using the shove-to-the-side-method, before I could get to the keyboard. Inspired by Shaz's post last week I've dragged out a bunch of UFOs and sorted them out. I've even managed to make one card, resting on the keyboard in the photo. It's not much but it's a start. On the left there's a pile of die-cuts (just visible), Brusho splattered bits and alcohol inked bits. To the right of the guillotine is a pile of card and stamped images, some already coloured, others still waiting to be coloured. The horrible mess to the far right is a couple of boxes of ribbon and lace scraps which I dragged out thinking it could be useful. At the back are the boxes and tubs of essentials that are permanently on show.

I've also set myself a target to clear the backlog of needlecraft projects waiting to be finished. Here are two that were finished this week. 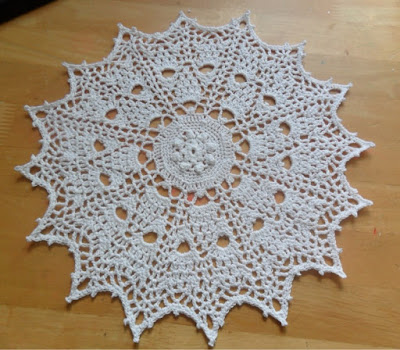 Crocheted pineapple patterned doily. The first one I've made for many decades. I did make a few, still scattered around on tables even now, before my children were born but this kind of crochet takes a lot of concentration - not the sort of thing to do when you have a house full of kids. 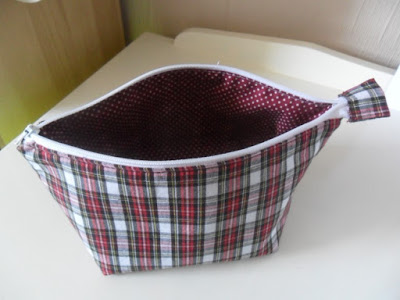 Zippered pouch. After the success of the scrappy bag I made for my daughter's birthday - shown in last week's WOYWW post - I've made this similar but smaller and simpler to make pouch. Forward planning for, dare I say it, Christmas. I found the easy to follow  instructions on Anna Graham's blog Noodlehead.

I think the pouch would make a lovely present, filled with goodies of course. And that reminds me that I had a few comments last week asking what the goodies were that I put in my daughter's bag. Well, they were skin products - all fruity perfumed, e.g. body butter, lip salve, hand cream, etc. She was particularly pleased with the hand cream because, as a quilter, her hands get very dry.

So that's what I've been up to this week. DH is taking me out for a spot of lunch now so I'll be over to see what's on everyone's desk later - just as soon as I'm back.

In the meantime, Happy WOYWW and have a wonderfully crafty week ahead.

Hi Elizabeth. Love the pouch. If you want to use up your bits you should have a go at the challenge on Tag Tuesday (https://tagtuesday.blogspot.co.uk/2017/08/use-your-scraps.html) it was great fun this time. I admire people who can do such delicate crocheting. My mother makes snowflake decorations but I have never managed to master the skill. Happy WOYWW Sarah #25

I'm chuckling here Ellie. You said that crocheting doilies isn't something you can concentrate on when you've got little ones....when my girls were small and before our son was born (so the eldest would be 3 at the most) I learnt how to do bobbin lace! I can't imagine for one minute how I did it but I have several pieces I made here somewhere. See....miracles do happen 😂😂😂😂😂
Hugs,
Annie x #11

I cant concentrate on anything like that doily..i lose my place to easily! It looks lovely - all the lovelier for being a finished piece now! The pouch is great, love the tartan choice! Good luck with using up the bits..we seem to be on a constant mission!

Hi Elizabeth. That pouch and the doily are lovely - well done you. Two more bits to put in the Christmas box!!!
Hope you are enjoying your lunch.
Take care. God bless.
Margaret #2

Your crochet work Elizabeth is outstanding.. and the bag pouch is beautiful... Have a wonderful lunch... enjoy... May#17

That doily is fantastic! I can do some basic crochet, but nothing like that. I love the zippered pouch and your card, too. They're both beautiful. Have a great crafting week!

I love all your "makes" today Elizabeth- the crochet is really lovely. I am hopeless at following a crochet pattern. That little tartan purse is so neat. xJo #18

Your doily is really very pretty. i myself used to crochet but never quite took to pineapple. Your doily makes me wish that I'd given it a go.
Happy WOYWW!
~Rose of rose's Art Garden #36

Hi Elizabeth. Ah, someone else who computes and crafts on the same desk. Yes, I understand the shove it to the side concept! Have a lovely week, Heather #30

WOW!, that doily is fantastic! We all operate the push to the side method of clearing... it's part of the job description of a crafter I think! Helen #1

That is so recognizable, I have piles around my desk everywhere because I push them to the side, LOL! Lovely makes too!
Have a great week! xo Cheetarah WOYWW #37

Lovely doily and zippered pouch. I learnt to crochet granny squares many years ago, but I'd love to be able to make something as intricate as your doily. xx

Ohh love all your craft goodies. Have a great week xx Jan (42)

I hope you and hubby had a lovely lunch! I used to make doilies like your beautiful one when I was in my 20's! I guess I had more patience then! And another zippered pouch - good to get a head start on gifts, I usually get hit with "what? December already?" LOL! Then have no time to make anything, so good for you! Have a great week, thanks for sharing, Lindart #35

I am always so impressed by someone who is able to knit and crochet. That doily is beautiful. And the zippered pouch is awesome - so very useful.
April #23

Love your new sewing project - the tartan looks fabulous!
Pineapple - takes me back a long long time. Auntie was very good at crochet, knitting, embroidery etc - mum more practical and a great dressmaker. I wanted to learn how to crochet. Could auntie teach me - no! She just had the knack of teaching missing and though she tried I got no further than a row of chain. Mum then tried and by some miracle she taught me and my first - yes, believe it or not - my first (and I think my last) effort was a large piece and the word 'pineapple' springs to mind. Also there were Solomon's Knots? It now resides on a coffee table at home and has lasted all these years.
Sorry, got carried away - good luck with the crochet.
Hugs, Neet 13 xx

Oh Elizabeth I love the pouch, must nab the info after writing this. However the crochet doily takes the biscuit for me this week it is gorgeous. Thanks for the visit sorry I am so late replying, got my son's A-level results Thursday and lots of stuff has happened since then too BJ#19