Good Morning Deskers and All

It's What's On Your Workdesk Wednesday again and this week I do have a desk shot to share with you. After last week's non-appearance I thought my desk should feature today otherwise our Head Desker Julia might think I'm not playing the game. 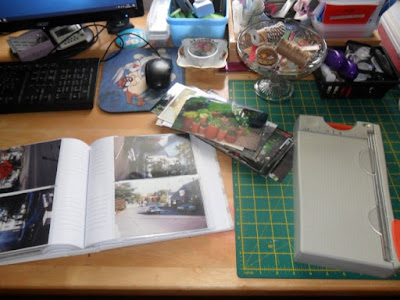 Still nothing crafty to reveal just photos being filed in albums. It's a work in progress, and long overdue at that. In the time that DH and I have been together we have managed to accrue a ton of photographs, particularly from the pre-digital age when every photo had to be printed from rolls of film. They've all been stored in three drawers up to now but I thought it was time they were organised better and somewhere more accessible for us to browse through now and again. I have to admit I didn't realise what a job I'd taken on. It has taken me several months just to get to the year 2004! 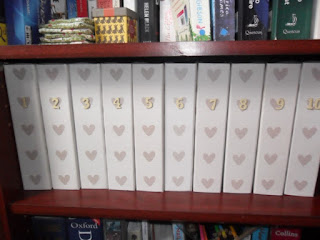 The completed albums are now on a bookshelf in the sitting-room. Note, all are numbered. They are from a set of American Crafts Thickers and I'm beginning to run out as the number of albums goes into the teens. I'm keeping my fingers crossed that I can track down another pack of the that exact same set of alphas or it will have to be Plan B - whatever that is! The albums hold two hundred photos each and I have two empty ones waiting to be filled. I'm not sure that's going to be enough to clear the last drawer.

Clearly I'm never going to have time to scrap more than a fraction of our photos yet we still keep taking them wherever and whenever. Thankfully the more recent ones are stored digitally and I'm much more selective when printing them out on my wee Cannon Selphy.

Still, it is a blessing to have so many photos - the memories those albums holds are simply priceless.

That's it from me for this Wednesday. I'm going to be out much of the day, on a mission of mercy for my sister, but I hope to be back later to check out as many of your desks as possible.

In the meantime, I wish you all a very happy WOYWW and a wonderful crafty week ahead.

Oh what a labour of love that us Ellie but how lovely to be able to pull an album out and sit for an hour or more remembering the happy memories you've made together......and what a lot you've made eh? I hope all goes well today...I will be thinking of you.
Hugs,
Annie x #11

Happy WOYWW. I do have quite a few photos printed out from over the years. I was always intending to scrapbook them all - but now realise that will never happen, so I think that albums like yours may be the way to get them out of the box on top of a wardrobe. I love looking through them, so I know it will be a long job. Well done for getting so far. Ali x #20

Wow, that looks like a big job indeed! I didn't start taking many photos until the advent of digital technology (which coincided with the birth of my son), so I don't have so many prints to worry about. It's a tough job to decide which ones to print, isn't it? I literally have tens of thousands of digital photos from the last 15 years! All backed up multiple times, but the hard part is to select the good ones from the not so good ones. I think we were more selective when we were using film. Nowadays, I take dozens of shots in the same setting, whereas with a film camera I would have taken one or two. Good luck with your big project! It will be lovely to flip through those albums when they are completed. zsuzsa #22

That looks a mammoth task, but you certainly seem to have broken the back of it. The digital age certainly makes things easier. Good luck with finding the match. Sarah #12

Hi Elizabeth. You are doing SO well with your photos. Those albums look brilliant. I agree - looking through the photos, remembering - priceless!
Take care. God bless.
Margaret #4

I have tons of photos too - most of which are in boxes... sounds like you had a mammoth task! (and still ahead too) but what memories when you can just look through them so easily! Helen #2

Hi Elizabeth that looks like a big job you've started but I guess if you take your time and do a bit at a time it will be lovely when they are finished. Have a great woyww and happy crafting, Angela x15x

So much work here Elizabeth but you are doing such a great job ;) Viv xx