Sunday again and I'm back with this week's snippet card for Pixie's Snippets Playground - Week 253. The theme for this month's SWAP on UKPC was to create a project using shades of grey together with a striking accent colour. After much scratching of the head, searching the old grey matter and a lot of hemming and hawing, this is what I came up with. 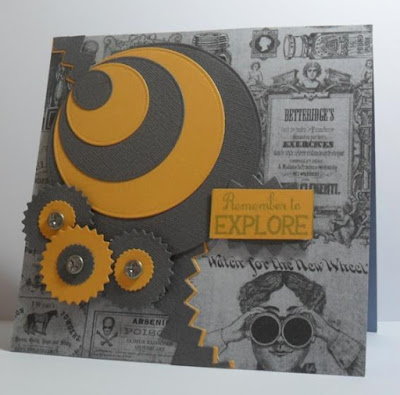 Happily, I was able to use up a bit of old stash, scraps and snippets on this card - the grey and yellow card is from the snippet mountain.

Here's how it was made.


I've no idea where the design for this card came from. It was one of those that just started with the base and evolved as I worked on it. And the choice of yellow was a bit of a surprise to me. I'm sure I've said this somewhere on this blog before but I'll say it again, yellow is not my favourite colour. However, I do think that this particularly strong yellow looks well with the gunmetal grey.

Now, I'd better finish. Poldark starts in a few minutes and it just wouldn't do for me to miss it.

Have a wonderful week.

Great design, I love the yellow with the grey. Lovely card.

A great way to use up the scraps Elizabeth, I love the paper you've used beneath the die cuts.

Well the head scratching was all worth it Elizabeth. You've put together a lovely card. It's a very striking design. Barbxx

Great card Elizabeth! Those colours really do go very well together! And love the design.