Back again after missing last week's WOYWW and later than expected too. I've been helping the EM sort out his mitres ... don't ask!

Anyway, here's the shot of my desk as it was late Tuesday evening. I took the photo then hoping to steal a march on the day ... clearly that didn't work! 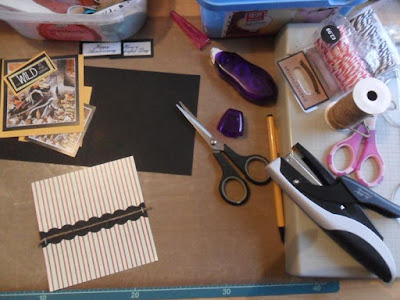 As you can see, I was in the middle of making a card - this one for my younger brother, Colin, so a masculine theme was called for. I confess to being pretty rusty at cardmaking. It's quite a while since I made any so well out of practice! The supplies out on my desk are a Creative Crafting kit - perfect for when a quick card is called for - American Craft cardstock, twine from WH Smith, the Tim Holtz Tiny Attacher and the usual scissors, tape runner and Tonic guillotine. Out of shot is the X-Cut scallop edge punch, chipboard card candy, coloured with a black Sharpie, also used.

I've since finished the card and it's now winging it's way to reach him just before his birthday ... phew!!!

Here's a few pics of the completed card. 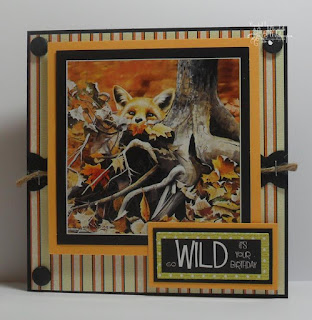 I used a lovely image of a fox from the brush ... see what I did there ... of Pollyanna Pickering.  The design is fairly simple. Well, it has to be when there's not much time ... his birthday is on Friday! 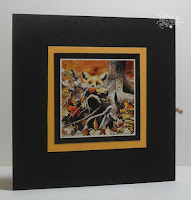 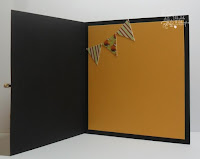 The back has a smaller version of the image on it as the one used on the front. There's so much stuff in these  kits it would be a shame not to use it up. To make it easier to write a greeting inside I've attached a panel of the cardstock with just a wee bit of bunting just for fun.

And that is my desk for today. I know everyone is, quite rightly, getting excited about the seventh anniversary of WOYWW and the ATCs, but I'm sure you will not be surprised to learn that, although I intend to make some, I haven't actually started yet. There's one or two ideas floating around inside the old grey matter but, as yet, nothing has crystalised into a design ... sigh. I have faith, there will be ATCs!!!

For today I've glued my bottom to my stool with the intention of visiting as many desks as possible so see you soon.

Hehehe you sound just how I'm feeling Ellie....I'm just hoping I come back off my hols with my batteries recharged. I really love your card as I'm sure your brother will too.
Hugs,
Annie x. #13

The card turned out great. I'm sure your brother will love it.

I´m glued on to my chair as well and will not go to bed until I´ve visited all the desks this time. Very inspiring and fun!

Hi Elizabeth thanks for visiting and your lovely comment although HB'S messy desk won't make the grade I'm afraid. I wish I was a messy crafter but I'm not which means I end up spending more time tidying than crafting LOL. What a stunning card with the fox,the colours are fab it is so striking, I find mens cards so difficult to do.
I do hope you have good luck with all your visiting it takes me days to get around,you wouldnt want to be glued that long ! ...you might get distracted making ATC's you never know !.a very happy and late WOYWW Andrea #3

I think this is a fabulous card - your brother will love it! Hope EM has his mitres sorted! Helen #1

lovely card, the paperdress for my princess was in fact gift wrapping paper I got from my mom just the other day, Vicky #6

Hello Elizabeth. Great job on the birthday card and I know your brother will love it as I love it. I know time is getting away from me but I think most of my day is filled with an 8 week old puppy that is taken most of my time up. Have a great week Hugs~Anne L#47

It's so nice to be back (at least for this week). I'm going to make it a go on at least posting on Wednesdays with a Friday Smiles thrown in every once in a while.

What a nice card for your brother. I love the playful fox image.

Thanks for visiting me already,
Happy WOYWW
Kay (4)

Hope it is a case of 'better late than never' - sorry I am so late but with being away ...
Love the card and I especially love the idea of the bunting - who is rusty? Not you that is for sure as this is a beauty. Bet Colin loved it.
Hugs, Neet 10 xx