In A Vase On Monday - Columbines 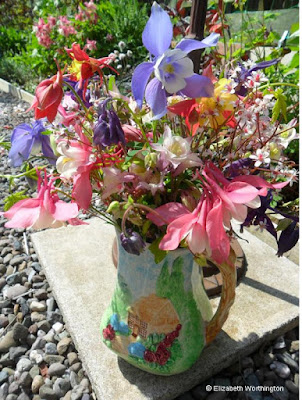 Looking around the garden for materials for In a Vase on Monday this week it soon became obvious it had to be Columbines (aquilegias) because there are so many in bloom at the moment. I know some regard them as weeds but Columbines/Grannies Bonnets are among my favourite flowers. I grow quite a few varieties - but I have still got long way to go before I can call it the National Collection! The named varieties you can see in my vase are Spring Magic (the Blue & White and Rose & White) alpines, bi-coloured Mrs Scott Elliot and Biedermeier. Aquilegia vulgaris is seeding itself everywhere and there's a few gatecrashers I don't know the names of too. 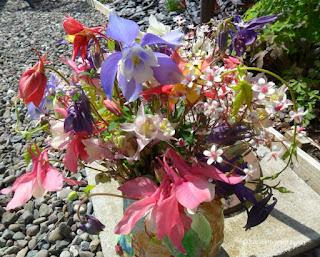 I did add a few sprays of London Pride, saxifraga x urbium, and a couple of trailing tendrils of golden hop, humulus lupulus 'Aureus'. For such a cottage garden bunch of flowers the only appropriate 'vase' was the old cottage garden decorated jug.

Unusually for a Bank Holiday weekend we have had nothing but scorching sunshine here so I've been limiting any garden work to the shadier parts of the garden or leaving it until early evening when it hasn't been so hot. Yesterday evening I potted up dark mullien, verbascum thapsus, seedlings - last year's sowing - and the two helleborus lividus bought earlier this year and now outgrown their original pots.  Today I've been weeding, those pesky weeds don't care that it's a holiday, and planting up a couple of cranesbill plants, hardy geraniums, found yesterday on a trip to the nursery in the Walled Garden at Culzean Castle Estate ... g. himalayense  and g. Johnson's Blue. I'm told that they are perfect spreading plants and therefore a help in keeping those weeds at bay.

While out in the garden earlier this afternoon I was devastated to witness a magpie carry off a baby starling despite the screeching of the distraught parents. As soon as I realised what was happening I  clapped my hands loudly scaring of the magpie which dropped the baby bird into our roof guttering. The parents then rallied round and did their best to rouse the baby but I fear it died despite everything. It's the second incident I've witnessed recently of a magpie killing a young starling.

Sorry to finish on such a sad note.

Oh my what beautifully colored columbines....I love how they sing happiness in that vase!

Nature can be so harsh sometimes. I hope that's the last starling you see nabbed from its parents. Your columbines are beautiful. I planted 3 'Spring Magic Blue' a few years ago but unfortunately they're slowly dying off in my hot, dry climate - there was only one plant left to bloom this year.

Such a sunny vase! Gorgeous colours.
The rooks around here terrorise the smaller birds, I'd like to put bromide in the water they drink!

Like Donna says, they are such a cheerful bunch when they get together, real party-goers in their pretty dresses! Thanks for sharing. It's good to have a blitz on planting and weeding, isn't it, although preferably not on a hot day!

Your aquilegias are all gorgeous! Love that vase too. What a horrible thing to witness with the magpies. We have got a magpie nest in our garden and recently watched them attacking some birds of prey that took an interest in their babies. I have little sympathy for them though as they are such bullies.