Two posts in one morning ... pass me the aspirin!

Hope you are well and having a very good Friday. the EM has his paint brush out, freshening up the living-room walls, so I'm sheltering in the craft room to escaping the paint fumes. It's hard not being able to join in but it does mean I've had time to make a card. 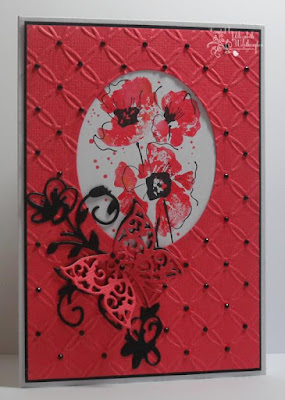 This card fits in with Mrs A's current Butterfly Challenge #55 which calls for an aperture and/or apricot. I couldn't manage the apricot but have created an aperture using an oval die - possibly for the first time ever! It was easier than anticipated so can't think why I haven't done it before.

Supplies used and notes on how the card was made:

- a piece of red textured card (Papermania) trimmed a fraction smaller than the black layer. I then die-cut the oval shape (from a CArt-Us die set) before embossing with the Crafts-Too Lattice folder

- the poppy stamped piece for the aperture. This is just one of the pieces from a stamping session I had some time last year. I can't remember exactly what I did then but I used the Rubbernecker Poppy Field stamp. These stamps come in two parts. There are several good demos on YouTube showing how to use them. For the coloured part of the poppies I used the watercolour technique with, I think, Tim Holtz Festive Berries distress ink and water. Archival Jet Black, again I think, was used for the outline. I trimmed the piece down a little to fit behind the red embossed topper which I then adhered it down on to the black layer.

- snippets of thin black card, not the same as that from PaperMill Direct but from goodness knows where,  and the red textured card die cut with a Tonic flourish die, Mariposa Petals. I adhered the black flourish on the front letting a part of it lie over the aperture. Then I trimmed the butterfly from the red one and adhered just the body part on top of the black one. I teased the wings up to take the photo but they will fold down flat for posting.

Because I've not been making so many cards lately, the snippet mountain, though not quite as high as Ben Nevis yet, is growing. That being so, I deliberately used as many snippets on the card as I possibly could which means I can also submit it to Di's challenge: Pixie's Snippets Playground - Week 229. Something to celebrate :)

Wishing you all a very happy Friday and an enjoyable weekend.

Great card Elizabeth! I do love the image you used and of course the aperture combined with the 'Tied Together' embossing looks fabulous!

Great to see you in the Playground :)

Me again, I'd forgotten just how like the Tied Together folder that Lattice one is. In fact, as it's less elongated I think it's my favourite one of the two. And I did giggle about your gluing all those gems in place. Isn't hindsight a wonderful thing? ;)

It may not be apricot but I love this card all the same. Those poppies are gorgeous and I love the lattice work you have so carefully stuck the gems too. It looks most effective. Thank you for fluttering by m y challenge . Hugs Mrs A.

It's a gorgeous card Elizabeth. Love the beautiful design and colours and the fabulous stamped poppies. it must have taken an ages to glue on each of those pearls but so worth it.
Thanks for popping by Mrs A's Butterfly and A challenge... Andrea GDT xx

Absolutely gorgeous Elizabeth, I love the poppies and your embossed background, Kate x

This is a really lovely card Elizabeth. The embossing folder and dies look beautiful and your poppy is stunning. A really beautiful card. Barbxx